Assets under management at mutual funds and ETFs that invest in U.S. leveraged loans shed another $1 billion in April as retail investors continue their retreat from high-profile market segment.

It was the sixth straight monthly decline, bleeding some $33.3 billion from loan fund coffers since October. Loan fund AUM now stands at $150.9 billion, the least since March 2017, according to Lipper and LCD. 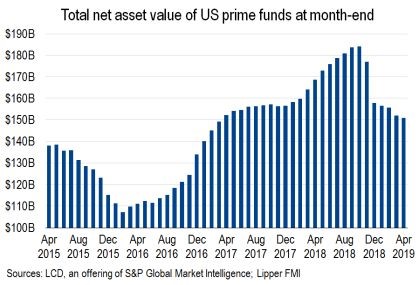 Again, retail investors were the driving factor, withdrawing a net $2.6 billion from loan mutual funds and ETFs during the month, per weekly reporters to Lipper. That activity brought the net outflow streak to 24 weeks by May 1 (it has since grown to 26 weeks, totaling $26.9 billion), as the prospects for interest rate hikes remain remote, prompting speculative-grade investors to focus on fixed-rate assets, particularly high yield bonds.

About those rates: Fed Chairman Jerome Powell indicated after the most-recent FOMC meeting that the Fed planned to sit pat regarding rates, saying "we don't see a strong case for moving [rates] in either direction," according to the Wall Street Journal. We'll note, however, that statement came before the latest market gyrations, brought about by China/tariff trade concerns.

Speaking of, prices on U.S. leveraged loans have given back some of April's gains in part due to those trade war worries, which escalated last week after the U.S. raised the tariff rate on $200 billion of Chinese goods from 10% to 25%. Loan bids have retreated 14 bps so far this month. 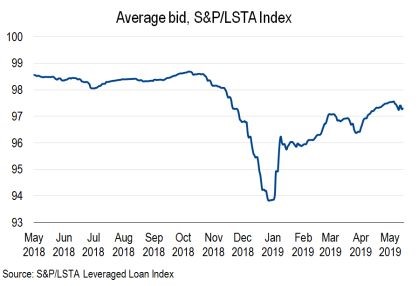 More broadly, S&P Global Ratings says the credit impact brought about by the tariffs should be limited, though the longer-term effects on growth prospects may be underestimated.

"The impact on business confidence has been quite significant, as reflected in the recent reaction in the equity markets," S&P Global's David Tesher and Terry Chan said on May 14. "This in turn could dampen investment appetite and have a follow-on effect on upside credit prospects."

The WSJ took a deeper look at that reaction, by the way, as opposed to the impact of the actual tariffs. — Tim Cross