The acceleration of COVID-19 to a global pandemic and collapsing oil prices have thrown the economy into turmoil and sent the leveraged loan issuer universe into distress, including some industries that looked relatively insulated from the disruption.

The fallout from the coronavirus, along with the broader economic picture, seems to change by the hour, but against a backdrop of a historically bad week for this typically less volatile asset class, some industries in the leveraged loan segment stand out. S&P/LSTA Index loans backing companies operating in the Leisure & Activities sector—including fitness centers and cinema chains—lost 14.18% in the week ended March 18. This compares to positive returns of 0.31% in the first full week of the year and 1.14% for December 2019—before the outbreak fears globalized. 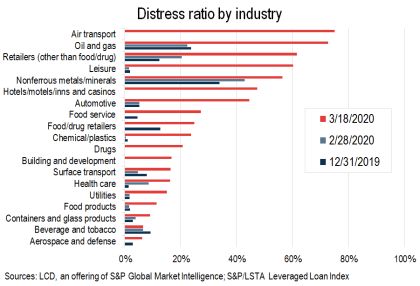 Moreover, in the three weeks through March 18, that sector lost 21.24%, versus an average across the sectors of a 15.23% loss, though it was only last week that losses in the sector really intensified.

Other sectors also shifted from rather benign downward moves three weeks ago to plummeting prices, as the scale of this crisis widened. The Food Service industry lost 10.83% last week, versus a 0.95% loss in the last week of February, and from positive returns of 0.66% in December. Home Furnishings recorded a 0.08% positive return in the week of March. 6, the sole sector to gain that week, only to collapse 9.18% in the last seven days.

Similar outsized moves were seen from other sectors previously deemed lower risk to disruptions from China. Surface Transport—including car hire companies—fell 1.5% in the last week of February, then accelerated to an 8.12% loss during the week ended March 18, while Beverages & Tobacco plunged from negative 0.93% to negative 4.58% in the same period.

Putting this in context, sectors already at high risk through exposure to China supply chains witnessed steeper declines, sooner. Air Transport returned a negative 3.79% in the last week of February, then a further 15.38% in the last seven days through March 18.

Oil & Gas—already reeling from reduced demand from the world’s largest industrial producer—lost a staggering 15.17% last week as the unforeseen oil price war added to recessionary fears. This put losses over the three weeks from late February at 27.96% in a sector that at the end of March looks set to record its ninth negative return reading over a 12-month period. It is also by far the biggest decliner in the last three-week period, eclipsing the aforementioned average drop across all other sectors during that period of 15.04%.

Taking a closer look at those that fared better or worse than the average, underperformance has centered in industries tied to the price of oil, China, and now social distancing measures, while defensives have outperformed. 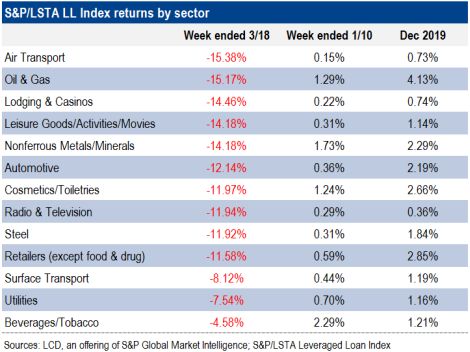 Stepping back a bit, there obviously is no escaping the effect of the global economic downturn right now. Indeed, in the U.S. leveraged loan market, the traditional metric measuring the distress ratio—loans bid below 80—is a sea of red when viewed by industry, which stands to reason, what with the average bid of the Index at roughly 78. 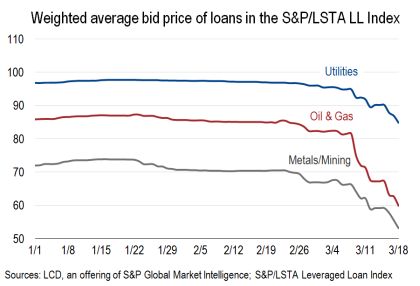 Painting the picture another way, the average bid price of Oil & Gas loans has dropped more than 25 points since December 2019. Metals & Mining has lost almost 19 points, while Utilities has lost 12 points during the period.

Europe
It is a similar picture in Europe. Looking at loans and industries within S&P’s European Leveraged Loan Index (ELLI), it is clear that four weeks ago, just as some softness around COVID-19 began to seep through, only those industries related to supply shock from China were being impacted. Autos lost 0.12% in the week of Feb. 21, for example, while Food Products gained 0.15%.

Fast forward two weeks to the first week of March, and the picture was shifting. Autos, which had previously underperformed, had one of the best performances that week, down 0.6%, while Retail was one of the worst performers, at negative 1.67%.

Then, in the week ended March 18, everything collapsed, and again it was those linked to supply shocks and social distancing that bore the brunt, with Autos caving 14.53%, Building and Development off 12.22%, and Retail slumping 18.98%. Even the defensive names dropped, but by less, with Healthcare down 9.47%. 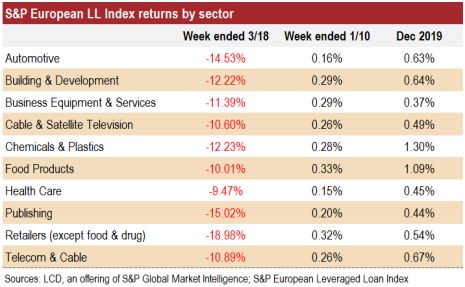 Over the full four-week period ending March 18, Retail has been the worst performer (–23.67%), and while it is often the whipping boy of the European market, this is also due to social distancing measures, and no doubt some reliance on Chinese manufacturing. Unsurprisingly, the best performer has been Healthcare, down 12.20%, and Food Products, down 12.59%.

Also highlighting a flight to quality is the better performance of the BB credits, with a loss of 10.23%, versus B rated credits at negative 12.38%. Triple-Cs are down 9.12%, but it was only the last seven days through March 18 that they really got hammered, with 73% of their four-week fall taking place last week. The sector seeing the greatest proportional decline in the last seven days, however, was Publishing, which recorded 89% of its four-week move last week, for a total loss of 15.02% during that period.

Refinancing risks
Turning back to the U.S., with the timeline for the “social distancing” disruptions still up in the air, LCD looked at approaching maturities, and the ability of companies to service that debt across the impacted industries.

For the most part, loan issuers have been able to take full advantage of accommodating conditions to lock in thinly priced debt and push out the overall maturity wall.

Most notably, the Air Transport sector has no debt due to mature until 2023, at the earliest. Maturity pressure in the Food Services sector and Hotels & Casinos also won’t materialize in any meaningful way until 2023.

Oil & Gas, though not a huge sector in terms of Index share (at 3.5%), has some of the most pressing maturities, with $5.3 billion maturing in 2021—debt that, of course, starts to become current this year. As would be expected, $3.5 billion of this is now in the triple-C ratings bracket. 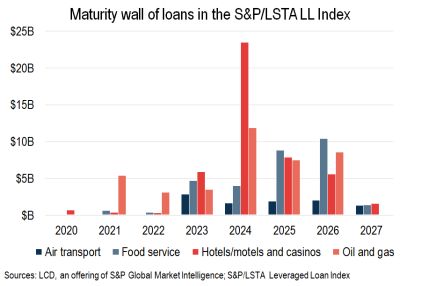 In terms of debt servicing across leveraged borrowers, based on earnings reports of S&P/LSTA Leveraged Loan Index issuers that file results publicly, quarterly EBITDA readings in the Oil & Gas sector dropped 22% in the fourth quarter of 2019, compared to the year-ago period. Earnings reported by loan issuers in the Hotels & Casinos sector fell 4% over the year, and Autos by 7%.

These numbers are for periods before the coronavirus crisis deepened, of course.