With bipartisan legislation introduced in Congress over what have been called exorbitant costs tied to “surprise medical billing,” healthcare providers and many leveraged finance market participants remain on the edge of their seats as the federal government mulls capping out-of-network medical costs for privately insured persons.

Credit investors are paying particular attention. Healthcare & Drugs issuers collectively account for some 11.4% of the roughly $1.18 trillion U.S. leveraged loan market, making that industry one of the largest components of the S&P/LSTA Loan Index. 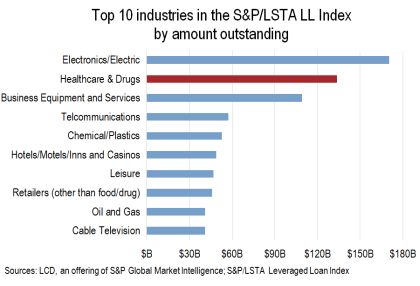 And growing concern this summer over the issue of surprise medical billing, as well as potential multibillion-dollar settlements and the rise of generic pharmaceuticals, have sent prices on numerous healthcare debt issues into distressed territory, pushing the share of loans trading below 80 to 4.03% at the end of August, from 2.81% at the end of July, according to the Index. 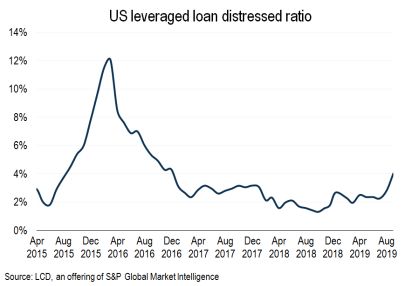 "There’s been a lot of price discovery over the last two weeks," says a head of portfolio management and trading at a CLO manager. "What’s hit the healthcare industry is somewhat idiosyncratic, but it’s part of…investing in the healthcare space. Frankly, anyone who’s investing in this space needs to be ready."

Indeed, while loan returns overall lost 0.27% in August, loans tied to Drugs and Healthcare slid 0.68% and 0.82%, respectively, according to LCD. Excluding these two sectors, the Index was down 0.21% last month. 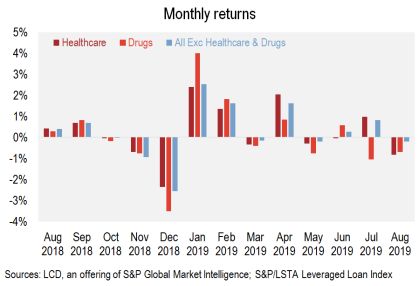 Battle in DC
Two respective bills were proposed in the House and the Senate this year, seeking to cap the costs for patients who receive unexpected bills for coverage from a doctor or hospital that is not in their insurance network.

The “Lower Health Care Costs Act” (S.1895), originally introduced on June 19 in the Senate, while the "No Surprises Act" (H.R. 3630) was introduced in the House Energy and Commerce Committee on July 9 where it passed unanimously on July 17 and is now incorporated into the "Reauthorizing and Extending America's Community Health Act (H.R. 2328).

The bills were viewed as particularly punitive for healthcare providers as they suggested an end to “balance billing,” where patients would no longer owe for an out-of-network procedure not provided by their insurer. Instead, costs would be held against a benchmark closer to government-negotiated plans like Medicare and Medicaid, or in-network costs for the same procedure.

This activity helped send the loans of two healthcare providers, Envision Healthcare and TeamHealth, dipping below 80, which is typically the threshold for a loan to be considered distressed.

Both loans are also prominently held by CLOs. Loans of Envision were the fourteenth most popular across 2.0 CLOs in the second quarter, while TeamHealth ranks 50th of the top 250 issuers, according to S&P Global Ratings.

Lobbying and dark money
Healthcare providers and insurers alike have turned to a multitude of options to influence the debate.

On the other end of the debate, the Coalition Against Medical Billing, which advocates for an end to balance billing, is publicly backed by a number of insurance groups, including BlueCross BlueShield and the National Association of Health Underwriters.

But many were also confounded by a barrage of advertisements on local television stations the past few months that cast the surprise medical billing issue on insurers.

Over $28 million in ads were purchased by a group innocuously named Doctor Patient Unity, which was formed July 23. The financial backers of such an effort were unknown for some time, until the New York Times on Friday revealed that TeamHealth and Envision Healthcare were behind the effort. Ken Spain, a spokesperson representing TeamHealth has since confirmed to LCD that the company was behind Doctor Patient Unity.

Under such a plan, the insurer and the provider would submit the potential costs to a third party, which would then select between the two, and have the losing party pay the cost of arbitration. Some following the legislative process say that an arbitration system would allow providers to set astronomically high costs, and come to a middle ground in arbitration that would remain well above current Medicare and Medicaid prices.

“Our suspicion is that the logic here is to create incentives for all providers to pursue out-of-network arbitration,” said Rosemary Batt, professor of human resource and labor studies at Cornell University, and author of a number of articles on surprise medical billing.

“In all likelihood, out-of-network charges would go up and the in-network doctors would have greater incentives to leave the network. The overall effect would be an increase in premiums.”

“The market was pricing in some pretty dire outcomes for healthcare providers [and it] seemed like the legislators let the insurance companies write the proposed legislation, [but] now the other side has had their chance,” one CLO manager said.

Management of TeamHealth, on a recent call to debt investors, said there was a roughly 65% chance of a bill passing by late 2020 or early 2021, according to one investor on the call.

More to come
Still, the debate over surprise medical billing only looks to continue leading up to any vote.

House Committee on Energy & Commerce Chairman Frank Pallone Jr. (D-NJ) and ranking member Greg Walden (R-OR) sent letters to KKR, Blackstone, and Welsh, Carson, Anderson & Stowe on Sept. 16 asking the firms for documentation over their ownership of healthcare providers, revenue earned from out-of-network billing versus in-network billing over the years, and role in the negotiation process their portfolio companies have with insurers. The letters request additional information by Sept. 30.

If anything, some of the healthcare providers may be looking to sell certain business lines to de-lever. Envision Healthcare, which has about 5.5x leverage through its first-lien debt and 7x total, could be looking to sell down some of its former higher-margin business lines that are seeing competitive pressure, such as its ambulatory surgical centers, one investor suggested.

First-lien investors have yet another concern. Given what was widely considered loose documentation on the Envision Healthcare credit, some have preemptively calculated how much in EBITDA add-backs sponsor KKR might be able to achieve, so that it can hit the appropriate threshold under its restricted payments basket, to pay itself a dividend, instead of paying down debt. — Andrew Park