In a report published yesterday, titled ‘The European Speculative-Grade Corporate Default Rate Is Expected To Reach 2.8% By June 2020’, the agency notes this level would be roughly half a percentage point higher than the current 2.3% rate, representing a reversal in the gradual downward trend experienced since mid-2017. 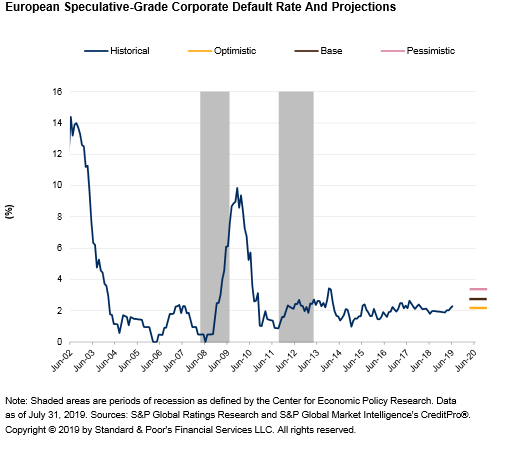 Over the past few years, there has been a noticeable shift in the ratings distribution, with a rising share of lower ratings within the speculative-grade category ('BB+' or lower), S&P adds. Most of the shift has occurred at the 'B' level, often resulting from financial underperformance relative to S&P Global Ratings’ expectations and leverage rising above its guided thresholds.

Another consideration in S&P's forecast for the speculative-grade default rate is the negative ratings bias, which the agency defines as the proportion of outstanding ratings with negative outlooks, or on CreditWatch with negative implications. The negative bias for speculative-grade European corporate issuers was 14% in June — up from 12.5% at the end of 2018, but still well below the 23% average since 2003, the report says.

Looking at sector mixes, the six areas with the most aggressive potential downgrade momentum are: aerospace, autos, capital goods, and metals; energy and natural resources; healthcare/chemicals; high tech, computers, and office equipment; leisure time and media; and telecommunications, S&P says. In addition to the heightened pace of recent downgrades and higher downgrade potential in these sectors, they make up 63% of the 'CCC'/'C' population — the riskiest set of issuers rated, S&P notes. With the addition of consumer products, this proportion jumps up to 91.4% of the 'CCC'/'C' rating category, says S&P.

A recent source of optimism, according to S&P, is the announcement that the European Central Bank (ECB) will embark on a multi-pronged approach to help boost eurozone economies, while it adds that by most measures, financing conditions remain favourable in Europe. This situation is largely a consequence of supportive language from the ECB, which has driven many interest rates to exceptionally low levels, S&P says.