The softening of key metrics is of particular concern to participants in the nearly $1.2 trillion leveraged loan space, which entails credits to riskier, speculative-grade borrowers. Over the past decade, the popularity of covenant-lite loans in this market has skyrocketed, while other investor protections traditionally found in leveraged loans have evaporated, amid intense investor demand. 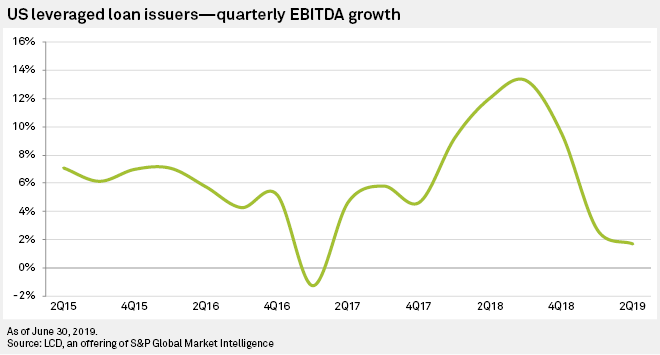 Market defenders have maintained that those eroding investor protections are less of an issue than they might appear, as long as corporate earnings remain strong and issuers are well-positioned to service what in many cases is considerable debt. Now that the economy appears to be slowing, however, that theory might start to be tested more often, with the potential for a spike in defaults, observers say.

Specifically, EBITDA growth across issuers in the S&P/LSTA Leveraged Loan Index that file results publicly was a marginal 2% in the second quarter, down from 3% in the first quarter, and well off the 9%–13% growth rates over the four quarters last year, according to LCD. Revenue growth across the sample slipped to 5% from 6% in the first quarter, marking a fourth straight sequential decline. That is down from growth rates of 9%–14% in 2017 and 2018. 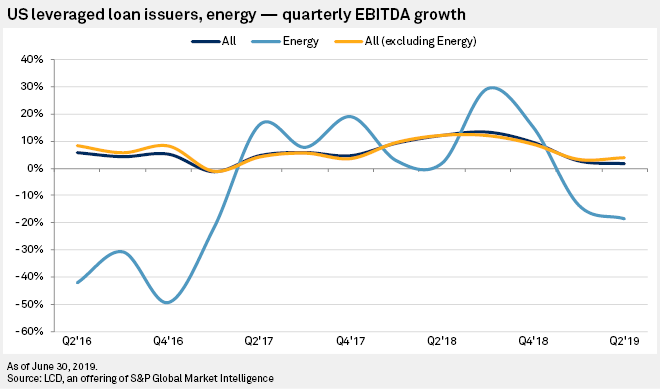 The sample includes 202 issuers that account for approximately 18% of the Loan Index, by par amount outstanding.

The results for loan issuers generally tracked with tepid growth across the S&P 500. With 462 companies reporting as of Aug. 15, the blended growth rate for earnings was just 1.7%, according to S&P Global Market Intelligence. Offsetting growth in earnings for the real estate, financials, healthcare and consumer staples categories were year-to-year declines for consumer discretionary, utilities, industrials, energy, materials and communication services. Loan-issuer sector progressions were broadly similar to the S&P 500 experience. 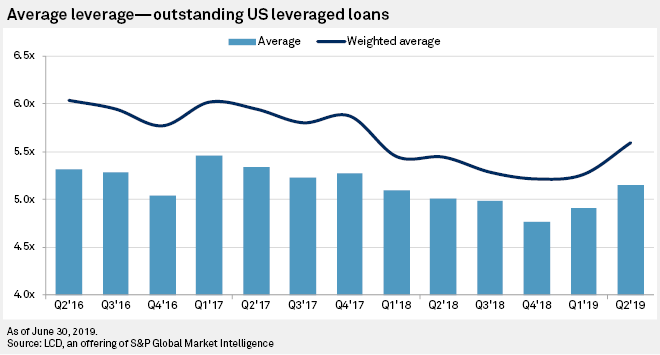 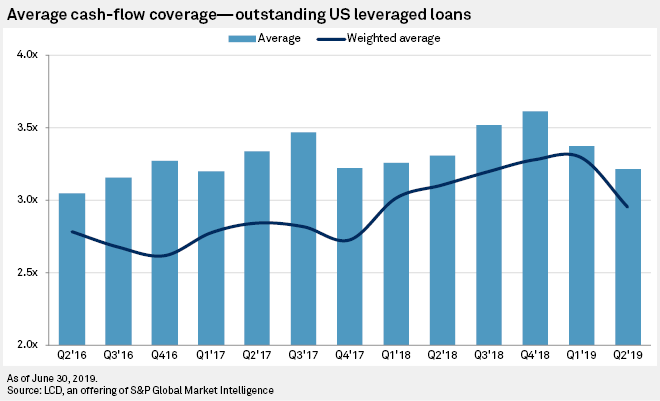 The risk of an earnings recession will put credit metrics under harsher scrutiny after trailing growth blunted the impact of mounting gross debt. Loan issuer leverage, on a weighted-average basis, increased one-third of a turn from the first quarter — to 5.59x from 5.26x — while cash-flow coverage declined 34 basis points sequentially, to 2.95x, according to LCD.

At present, both indicators are modestly better than their trailing-12-quarter averages, or 5.67x for leverage and 2.93x for cash flow coverage. But there are now more issuers operating at the extremes of credit tolerances, including a nearly three-point sequential increase in the percentage of loan issuers with leverage of greater than 7x, to 18.3%. The percentage of loan issuers with cash flow coverage of less than 1.5x swelled 113 basis points from the first quarter, to 20.6%. 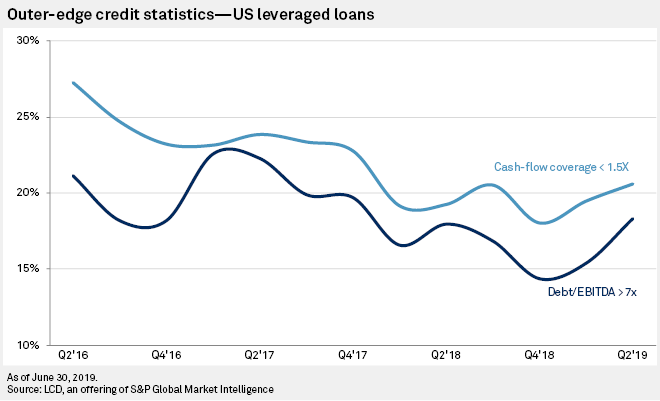 Coming into the third quarter, loan portfolio managers continued to see life left in this aging credit cycle, according to LCD's quarterly loan-manager survey. While they bumped up their default-rate forecasts through 2020 by 12 basis points from the first quarter, to 2.7%, respondents again pushed out the timeline for when they believe the market will breach the 2.92% historical average. Just 17% predicted this to be a 2020 event, compared to 25% at the March quarterly poll. Fewer managers (58%) see this happening in 2021, versus 75% at the March read. 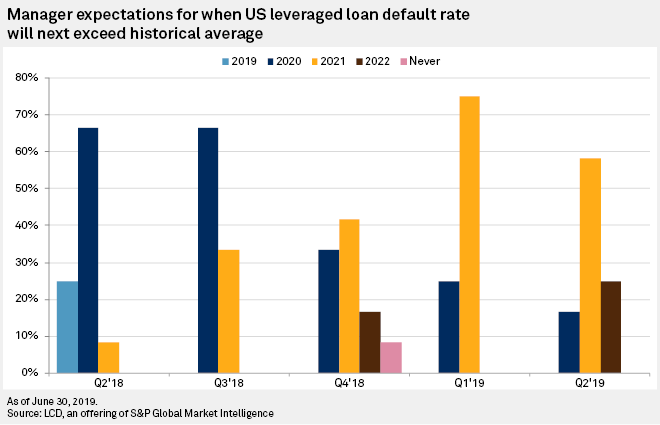 But at least some of those views may have dimmed in recent weeks. S&P Global Economics' latest Business Cycle Barometer (BCB) reading showed further deterioration in leading indicators as of mid-August, as the term spread indicator turned negative to reflect curve inversion, and both freight transportation and the ISM (manufacturing) new orders index turned neutral from positive. The group's qualitative assessment, combined with calculated odds based on financial market spreads, puts the risk of a recession in the next 12 months at 30%–35%, up from 25%–30% three months earlier.