U.S. agriculture producers and automakers could be forced to raise prices or halt manufacturing lines if President Donald Trump follows through on a threat to close the border between the U.S. and Mexico.

Trump threatened on March 29 to close the border with Mexico during the first week of April, saying that Mexico had not done enough to stop migrants attempting to illegally enter the U.S. from Mexico.

So far, the president has not closed the border. White House Press Secretary Sarah Sanders said April 2 that Trump "is not working on a specific timeline" for closing the border, according to a White House pool report, adding: "It may be that it's the best decision that we close the border" but that "it's not our first choice."

But companies reliant upon suppliers in Mexico are not waiting for a hard timeline to consider their options, according to trade groups representing the produce and auto industries. With billions of dollars in trade as well as a new trilateral trade deal — the United States-Mexico-Canada Agreement — on the line, the trade groups have fielded calls in recent days from members on how to handle a potential border closure. 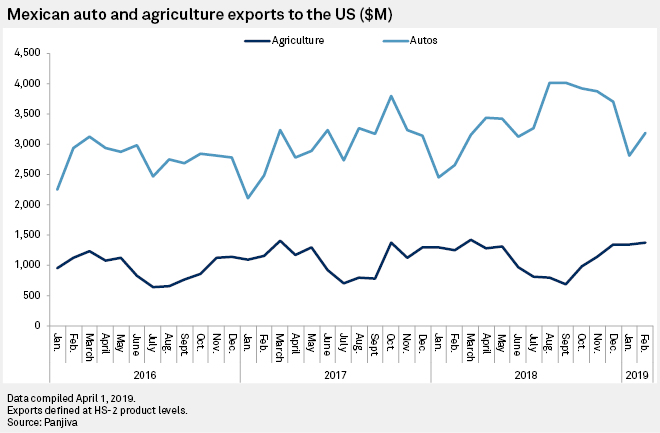 Mexican exports of fruit and auto-related products collectively account for tens of billions of dollars in goods, with auto product exports worth $46 billion crossing the border into the U.S. during the 12 months to Feb. 28, according to Panjiva, a division of S&P Global Market Intelligence. Agricultural exports over the same period were worth $13.5 billion.

Companies that rely on a stream of fresh produce grown in Mexico are already forming contingency plans, said Richard Owen, vice president of global membership and engagement at the Produce Marketing Association.

For importers of certain fruits, Mexico is a key source at this time of year, Owen said in an interview with Market Intelligence. Table grapes, for instance, are cultivated in South America during the U.S. winter before production shifts northward to Mexico in the spring and summer. Many U.S. producers do not have products to ship until September or October.

"You've got this window between now and summer when Mexico is a major supplier," Owen said, adding that finding alternative sources, especially on short notice, is difficult because of the seasonal division of production between regions.

Turning to air shipments to move certain high-value produce, such as berries, could make economic sense, Owen said. But for many types of fresh produce, including avocados, the decision for suppliers and retailers will depend on whether customers can stomach paying "$4 or $5 for an avocado," for example, he said.

Major exporters of produce to the U.S. from Mexico, including Fresh Del Monte Produce Inc. and Taylor Fresh Foods Inc., did not respond to requests for comment. 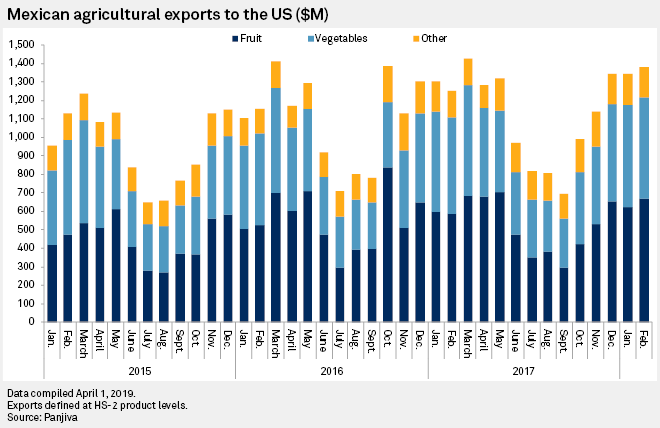 On a monthly basis, the dollar value of Mexican agricultural exports to the U.S. is often dominated by fruit, with vegetables and other products accounting for smaller portions, according to Panjiva.

If the U.S. border with Mexico were to close, it would disrupt the auto industry "almost immediately," according to Cox Automotive analyst Charlie Chesbrough.

The Auto Alliance, a trade group of automakers that operate in the U.S., said the industry relies "heavily on cross-border trade through the North American region."

"In many instances, auto parts can cross the border seven to eight times before being integrated into the final assembly of a vehicle," the group said in a statement, adding that a border closing "would result in significant disruptions to the North American auto industry."

Further, most manufacturers utilize just-in-time inventory, whereby manufacturers receive goods only as they are needed in the process, Cox's Chesbrough said.

"They're waiting for parts and products that are part of their assembly process to show up right on time when they're supposed to be there," Chesbrough said. "And if they don't, it will hold up assembly at all their facilities, wherever they may be around the country."

While automakers could explore finding new sources for parts, many components are calibrated for specific companies, making the process difficult, he said.

"I'd be very surprised if [Trump] moved forward with this," Chesbrough said. "It doesn't make a lot of sense to enact this, certainly not for economic reasons."

Some examples of vehicles that are produced in Mexico but sold in the U.S. include General Motors Co.'s Chevy Blazer as well as Ford Motor Co.'s all-electric performance SUV, which will launch in 2020 from the company’s plant in Mexico.

General Motors, Ford and Fiat Chrysler Automobiles NV referred Market Intelligence to statements from the American Automotive Policy Council and the Auto Alliance. Matt Blunt, president of the council and a former Louisiana governor, said any action that stops commerce at the border would be harmful to the U.S. economy and the auto industry.

"Access to Mexico’s marketplace and North American integration are critical to operations in the U.S.," Blunt said in a statement.