Investors and analysts are getting a better idea of how a new accounting standard will affect banks' balance sheets and deal metrics.

With less than a quarter remaining before large banks have to implement the current expected credit loss standard known as CECL, several banks have offered estimates on how the change will impact their loan loss reserves, primary capital ratio and future income statements. Further, a handful of recent deals offer insight into how CECL changes closely watched financial metrics.

Recently announced mergers underscore that the size of the transaction will play a central role in CECL's effects on metrics. First Defiance Financial Corp. will nearly double its asset size when it closes its recently announced deal to buy United Community Financial Corp. Executives expect the combined bank to have $6.1 billion of assets, compared to First Defiance's $3.3 billion of total assets in the second quarter. The transformative nature of the transaction amplifies CECL's effects on deal metrics with executives saying the accounting change more than doubles the expected time to earn back the tangible book value dilution caused by the merger. 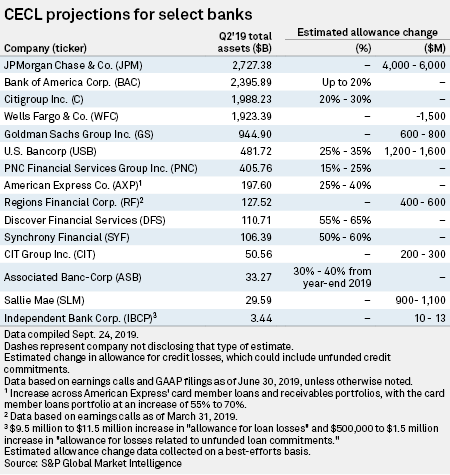 The increase in earnback timelines is due to the "double count" for certain loans that requires both a fair value credit mark and an allowance build for credit risk. While the deals show CECL can weigh on metrics, it is unclear whether the market will appreciate the accounting standard's effects.

Laurie Havener Hunsicker, an analyst for Compass Point Research & Trading, wrote in an Oct. 8 note that the market will not adjust its expectations because of the accounting change. She wrote that banks still need to report tangible book dilution of less than 5% — even after the CECL effect — or the market will react negatively.

Banks have also offered insight on how CECL will affect operating metrics, and analysts expect more during the upcoming third-quarter earnings season.

U.S. Bancorp provided numerous disclosures as part of an investor presentation at Barclays Global Financial Services Conference. The nation's largest superregional estimates CECL will require a $1.2 billion to $1.6 billion build in total allowance, largely driven by its credit card, mortgage and retail lending. The bank projects a capital ratio impact of 25 basis points to 35 basis points. Regulators in 2018 passed a rule that would allow banks to phase in the capital ratio impact over the course of three years.

Ken Usdin, an analyst for Jefferies LLC, noted U.S. Bancorp's guidance also provided insight on the bank's future income statements, writing that "run-rate provisioning will also reset higher." The company estimated it would need to maintain loan loss reserves equal to 1.9% to 2.0% of total loans, compared to the current ratio of 1.5%.

U.S. Bancorp joined the "big four" U.S. banks that have more than $1 trillion of assets in disclosing their CECL forecasts. Bank of America Corp. and Citigroup Inc. offered similar estimates, with Bank of America projecting an "up to 20%" increase in its allowance and Citigroup projecting a 20% to 30% hike in its credit loss reserves. JPMorgan Chase & Co. was a bit higher with an estimated $4 billion to $6 billion reserve build; the midpoint of that range would represent a 37% increase to loan loss reserves as of the second quarter. All three of those banks highlighted credit cards as the primary driver.

By contrast, Wells Fargo & Co. projected a reserve release of $1.5 billion at adoption. That would represent a 15% decrease in its loan loss reserves in the second quarter. The bank increased its estimated release from previous guidance, which the bank said was primarily due to reclassifying $1.8 billion of residential mortgage loans as "held for sale."

With third-quarter earnings season approaching, analysts expect more disclosures but perhaps not much in the way of clarity since CECL allows banks to use their own idiosyncratic models to estimate reserves.

"We expect a wide variance of assumptions will be reported by banks," Raymond James analysts wrote in a Sept. 27 note. "Such variances will make comparing results among banks more challenging, but we are optimistic that bank disclosures will allow investors to better compare such results."