Demand for fitness trackers worldwide grew significantly over the past year due to compelling new product releases coupled with strong demand in China.  Worldwide unit shipments in 2019 jumped to an estimated 68.2 million, up 32% over shipments in 2018.

Demand for fitness trackers in 2019 was a notable uptick in comparison to recent years, as global shipments had fluctuated between a low of 41.7 million and a high of 51.5 million from 2015 to 2018.   Among the recently released products sparking market growth were Xiaomi’s Mi Band 4 and Mi Band 5, Fitbit’s Inspire HR and Charge 4, and Samsung’s Galaxy Fit and Galaxy Fit E. 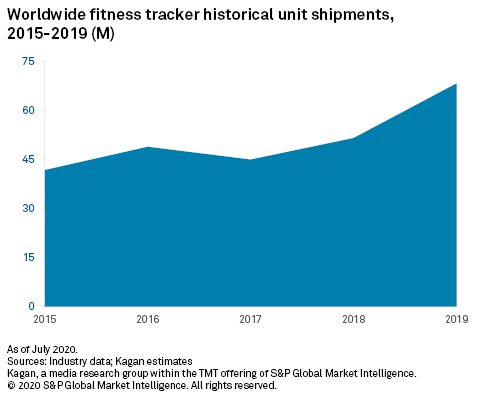 Along with these new products, the COVID-19 pandemic is also fueling product sales, as an increasing number of consumers are turning to wearable devices to monitor personal health information such as body temperature and heart rate.

A fitness tracker, also known as an activity monitor or fitness band, is a device commonly worn on the wrist and used to monitor and track fitness-related metrics such as distance walked, heart rate and calorie consumption.  Fitness trackers are relatively easy to use, and are often promoted by medical professionals who note that people wearing fitness trackers are less sedentary and more active than those who do not wear the devices.

Fitness trackers began appearing in late 2011 and early 2012, when a handful of companies, like Fitbit, Nike and Jawbone released the first generation of products.

The primary market drivers for fitness trackers are:

• The products are easy to use and offer information about a person's activity levels and exercise regime, as well as tracking sleep duration and quality.

• They often serve as a motivational tool. Just by wearing a fitness tracker, some users are inspired to exercise more often.

• Fitness trackers are relatively inexpensive, with most priced between $40 and $150. These attractive price points have made the products a popular gift.

• An increasing number of products offer useful health-tracking technology, to include heart rate sensors, body temperature sensors and even blood oxygen trackers (SpO2).  The integration of these capabilities is proving to be quite popular with consumers in the era of COVID-19.

• Accuracy.  While most fitness tracker product reviews note that the data collected is generally accurate, other metrics, such as the sleep quality information, are sometimes viewed skeptically.

• Over-monitoring syndrome.  This issue can reportedly occur when a user gets so caught up in tracking their activity they lose sight of overall fitness goals and focus only on meeting something specific such as a steps-per-day goal.

• The most significant challenge to the fitness tracker market is that its capabilities are being integrated into another wearable technology product: the smartwatch.  Over the past few years, several leading smartwatch manufacturers have begun integrating wellness and fitness tracking capability into their products.  With smartwatches, such as the Apple Watch Series 4 and Series 5, now offering similar or even more advanced functionality to track and provide user health-related information, demand for fitness tracker products is under pressure, particularly in regions like North America and Europe.

Currently, the global fitness tracker market is dominated by Xiaomi, which accounted for an estimated 48% of worldwide shipments in 2019.  Xiaomi, a Beijing, China-based electronics manufacturer, produces the Mi Band fitness tracker product line.  The company sells the vast majority of its low-priced trackers to consumers in China, where the release of a new Mi Band product can spark huge demand.  For example, when Xiaomi released it Mi Band 4 in June 2019, the company sold an estimated 1 million fitness trackers in just eight days.

In 2019, Xiaomi shipped an estimated 32.5 million fitness trackers. With the release of the Mi Band 5 in June 2020, Xiaomi appears to have further solidified its lead in the fitness tracker market.

Fitbit, one of the original fitness tracker market leaders, offers a broad line-up of products and is second in global market share.  Fitbit’s Inspire HR, released in November 2019, and the Charge 4, released in April 2020, are driving current demand for its products.  In 2019, Fitbit shipped an estimated 9.9 million fitness trackers, up from 8.4 million in 2018.

Global demand for fitness trackers increased 32.4% in 2019, as total shipments reached 68.2 million.  Two geographic regions, North America and the Asia Pacific, accounted for 81% of fitness tracker shipments in 2019.  While other geographic regions experienced growth in demand in 2019, global market growth is projected to be driven by those two regions through 2024. 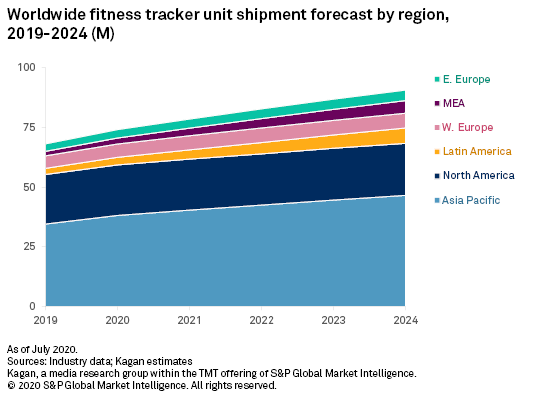 Worldwide unit shipment growth is expected to remain solid over the next few years, a change from previous forecasts when the expectation was that the growing popularity of smartwatches would have a negative impact on long-term demand for fitness trackers.  However, the past year has highlighted how fitness trackers have succeeded in defending their space in the wearable technology market, primarily by enhancing their health-tracking capabilities and maintaining attractive pricing.

Kagan projects global fitness tracker unit shipments to reach 74.1 million in 2020, boosted by sustained demand for products in China.  By 2024, we are forecasting shipments to exceed 90 million, with growth driven primarily by the Asia-Pacific region, but supplemented by rising demand in regions such as Eastern Europe and Latin America. 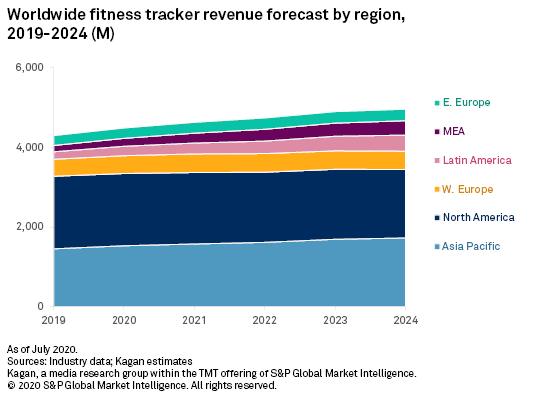 Average selling prices, or ASPs, of fitness trackers have firmed up over the past year as vendors integrate new capabilities into the products.  For example, North American ASPs have remained steady over the past year, with the current product ASP at approximately $87.

Fitness trackers sold in China are priced much lower than in other regions.  Currently, Xiaomi’s popular Mi Band 5 fitness tracker is selling for approximately $35 per unit.