The proposed £31.40 billion joint venture between Liberty Global PLC's Virgin Media and Telefónica UK Ltd., doing business as O2, is set to complete by mid-2021 and is Europe's first major telecom M&A deal since the beginning of the COVID-19 crisis. It came ahead of the General Court of the European Union's May decision to rescind the European Commission's decision to block O2's attempt to merge with Hutchison 3G UK Ltd., or Three, in 2016 and marks a major turning point in the drive to further consolidation. Europe's telecom sector has struggled to perform for years on the back of failed global ambitions as well as heavy, restrictive regulation that led to hypercompetitive markets with low margins and a drag on future investments.

Telefónica SA had attempted to divest O2 in 2014, holding talks with British Telecom, which later acquired EE Ltd. A year later, Three's £10.25 billion bid for O2 failed as the EC blocked the deal. The EC reasoned that an O2-Three deal would remove a key mobile competitor, leading to fewer offers for consumers from mobile network owners Vodafone Group PLC and BT's EE and consequently raise the cost of mobile services in the U.K. Other issues the EC considered included the impact on the quality of services and mobile network development, including the prospect of fewer MVNOs.

The Court ruled that the arguments were not "to the requisite legal standard" with the competition authority making "several errors of law and of assessment." The idea that many of the region's regulators have previously held to, the need to maintain four mobile network operators in each market to maintain effective competition and services, has broken down.

Only six MNOs, or licensed spectrum owners, remain without any fixed-line services in Western Europe: Hutchison's Three operations in the U.K., Ireland, Sweden and Denmark; Ice Group ASA in Norway; and Iliad Italia SpA in Italy. Many of the region's mobile markets have consolidated to three MNOs — Belgium, the Netherlands, Italy, Germany, Portugal, Switzerland, Finland and Norway — and remain highly concentrated markets. In other regions, several major markets operate effectively with three MNOs in China, Japan, the U.S., Turkey and South Korea.

On the fixed front, out of 16 markets, four host five major rivals. Seven of the 16 markets host four main players and the rest have three primary competitors. Smaller ISPs exist in all of these markets but tend to hold only a tiny share at less than 5% in total across most markets.

As saturation increases and organic growth shrinks, pressure from competition, including over-the-top services such as WhatsApp, large debt amassed from years of failed global expansions and costly mobile license acquisitions will see M&A prospects raised in such markets. In recent years, many of Europe's leading operators — Vodafone, BT, Telenor ASA, Telia Co. AB (publ), Telefónica and Orange SA, among others — have either scaled back or are in that process, after struggling to scale operations across disparate and differing market conditions. The key to establishing healthier operating conditions is consolidation and next-generation infrastructure investment, namely fiber and 5G.

On the continent, quad-play services, to an extent, have helped to mitigate the impact of heavy competition, lowering churn rates in increasingly saturated markets. According to local regulators, in Portugal, 49.7% of total service subs are four and five play subscribers, and in Spain, 42.5% are quad-play subscribers with fixed voice and broadband and mobile telephony and data. Proximus in Belgium, which offers fixed and mobile services, in 2019 had 60.3% converged customers. Proximus also shows a significant variance in churn rates from bundle services, with single-service customers having an annual churn rate of 23.2%, while quad-play services have a churn rate of just 4.2%.

Only a few remaining operators are without their own mobile licenses and fixed-line infrastructure, and even fewer have both fixed and mobile services through LLU and MVNOs.

A Virgin Media-O2 combination sets the entity up for a much improved competitive positioning by capitalizing on fully convergent packages in the U.K., which can drive revenue growth and provide greater stability on churn. The deal valued Virgin Media at £18.7 billion and O2 at £12.7 billion. For Virgin Media, this implies an EBITDA to enterprise value ratio of 9.7 and an enterprise value of £1,116.86 per customer. For O2, it implies a ratio of 7.6 and an enterprise value per customer of £485.74. The joint venture will be equally controlled by Liberty Global and Telefónica and will result in £540 million in synergies annually and long term debt of £17.60 billion. The combined companies generated £11.0 billion in U.K. revenues at the end of 2019, still less than half of incumbent BT's £23.05 billion.

The last similar M&A activity in the U.K. was in 2014 when BT acquired EE from Deutsche Telekom AG and Orange. At the time, EE was valued at £12.50 billion and had reported 30.9 million subscribers, valuing them at £404.06 based on enterprise value, slightly lower than O2 today.

Virgin Media reported eight out of 10 customers subscribe to another mobile operator and that half of O2 customers are looking for convergent packages from either company. The joint venture will allow the companies to target those customers and rival BT, which currently controls 35% of the residential broadband market, 11% of the pay TV market and 30% of the mobile market through EE.

Over the last few years, Liberty Global has sold a number of its fixed operations to mobile operators including Vodafone and Deutsche Telekom, looking to focus on its more profitable markets. In Belgium, Liberty Global acquired MVNO Base from KPN NV, and in the Netherlands, it created a joint venture with Vodafone to offer convergent packages that have driven significant growth.

Fixed services in the U.K. have experienced a slowdown, with pay TV subscriptions declining in the last two years and moderate growth in broadband subscriptions. Meanwhile, competition in the mobile market continues to intensify as operators have introduced value-added services to their packages, with Telefónica as the last operator to add them in 2020. 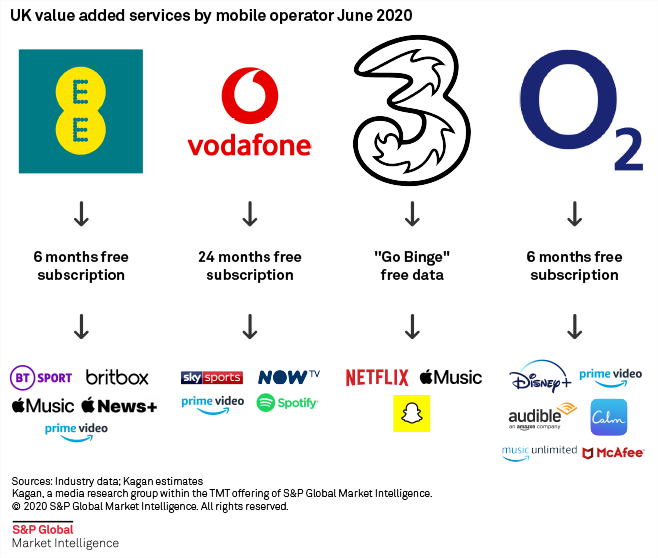 In March 2013, Telefónica exited the U.K. fixed-line market, selling to Sky for £180 million. Sky gained more than half a million O2 and Be consumer broadband, home phone and line rental customers. O2 had considered a return to the fixed market post-sale, and its move for a joint venture leaves Three as the last mobile-only provider in the U.K.

Meanwhile, TalkTalk and Sky remain two of the major competitors in the market running MVNO operations, which could see them target Three's proprietary mobile network. Vodafone, which has experienced strong broadband sub growth in the U.K. with a 55.42% CAGR since 2016, and has struggled on the mobile side with a 0.18% CAGR, could similarly tie-up with TalkTalk to shore up its fixed position and boost its convergence capabilities.

Virgin Media has racked up a comprehensive number of triple-play subscribers, although it has struggled to build a quad-play base. By the end of 2019, the company reported 62% of its subscribers were on triple-play packages and 22% were on convergent packages. Quad-play services have not taken off in U.K. as they have in other Western European markets. The new joint venture will certainly make a concerted effort to drive uptake and has the opportunity to succeed if it can effectively market and show real value for consumers from these offers. Sky UK's move into mobile via an MVNO in 2019 and BT's acquisition of EE are also attempts to drive fixed-mobile convergence.

MASMOVIL Group, which launched as a fiber network company in Spain via its acquisition of Jazztel Telecom in 2014, also acquired mobile operator Yoigo in 2016. In August 2019, the company expanded to Portugal, acquiring Nowo-ONI from KKR & Co. Inc. less than a year after KKR itself acquired it from APAX, which bought it in 2016. In May 2020, Equity Partners, Cinven and KKR bid to take over Masmovil at €22.50 per share, valuing the company at €4.6 billion. The acquisition valued Masmovil subscribers at €501.63 per customer, based on enterprise value. Masmovil has seen steady growth in both mobile and broadband consumers, driving a 16% total revenue growth in 2019. Major providers offering converged packages dominate Spain and Portugal.

In Spain, Masmovil is the only service provider lacking a pay TV offer, with low penetration rates and intense competition in the sector making it an unattractive proposition. In 2019, the company ruled out the possibility of acquiring regional cable operator Euskaltel SA, the last fixed service operator without a mobile license, as it would have added minimal value to the company.