Obstacles exist in the short-term, but new projects are expected to grow at 30% annually through 2023

Smart cities are a driving force of the industrial internet of things segment. Though projects can be ad-hoc and limited, the U.S. has been among the world’s smart cities leaders, and the numbers are expected to grow significantly through 2023.

A project launched during a given year can include any one of the following smart city categories: streetlights, parking, environmental monitoring, auto/traffic monitoring, public safety, public transport, waste management, and government administration.

According to Kagan estimates derived through primary interviews and secondary research, new smart cities projects are expected increase at a 30.1% compound annual growth rate (CAGR) between 2018 and 2023. Long-term growth is expected in spite of barriers to adoption that are causing slower short-term uptake of new projects. In its current early stage, the market is slower-growing and fragmented, with growth rates of 19.7% and 24.8% expected in 2019 and 2020, respectively. There is currently no obvious must-have application stimulating adoption, and smart cities platform vendors must deal with many municipal governments of varying sizes, all with their own requirements, making it difficult to scale smart cities applications across the country as a result. However, over the longer term, Kagan expects the number of smart cities projects to accelerate, driven primarily by big cities need to save money and generate revenues. 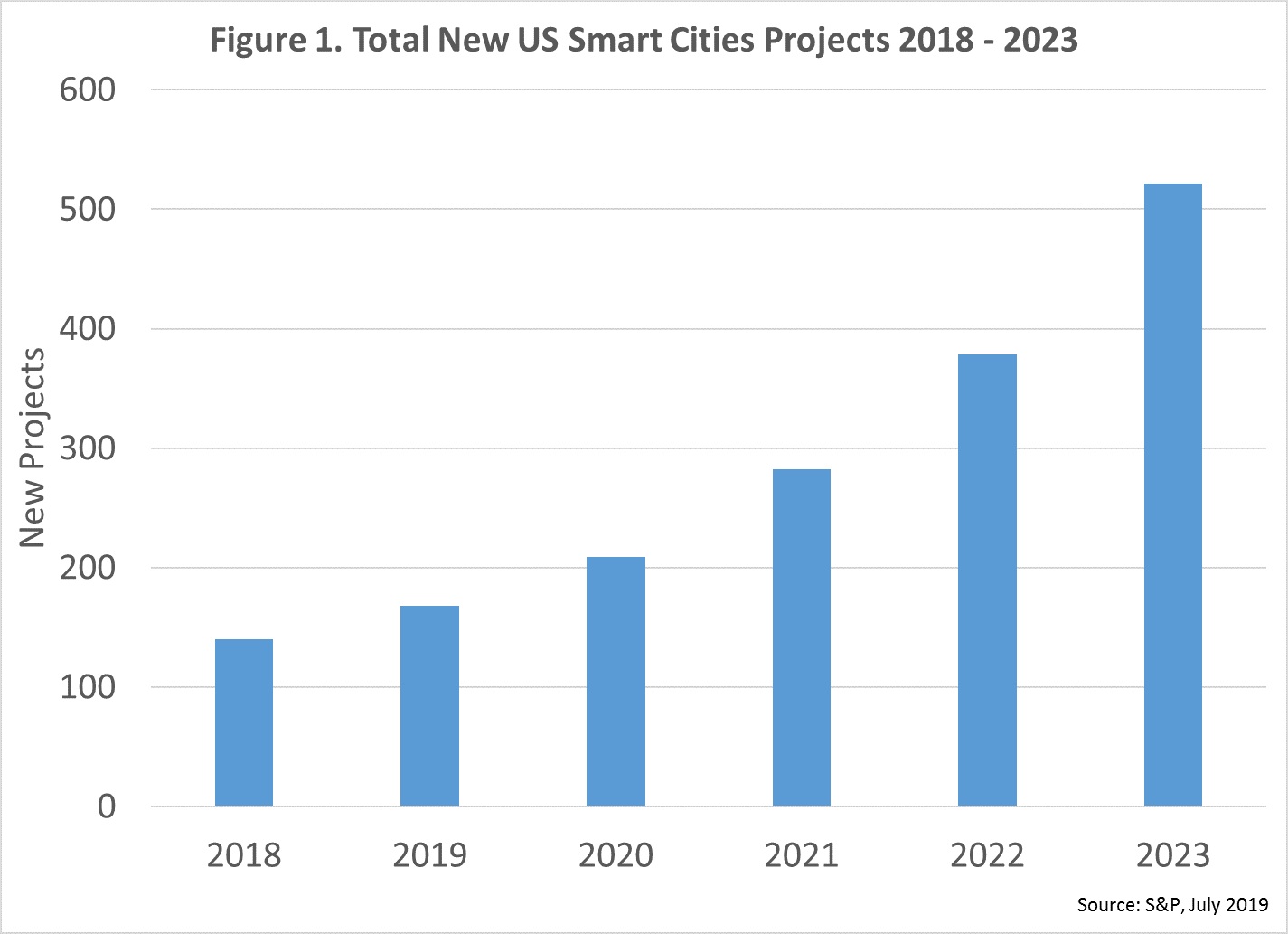 The forecast for total smart cities project revenues through 2023 includes hardware, software and consulting revenues, and can be seen in Figure 2. Hardware includes all electronics and packaged devices required for a smart city project. Software and consulting revenues include charges to implement new projects, including software, cloud computing, storage and analytics.

As with smart cities projects, revenue gains should be relatively limited in the first two years of the forecast, but the growth rate accelerates sharply toward the end of the forecast period. We anticipate revenue potential will improve as word of successful projects allows a better understanding of benefits across more cities, and budgets will increase as potential advantages are fully recognized. In addition, the need for segments such as public safety and auto/traffic monitoring will be felt more keenly with population growth in larger U.S. cities. Overall, total revenue is expected to grow at a 42.1% annual rate through 2023. 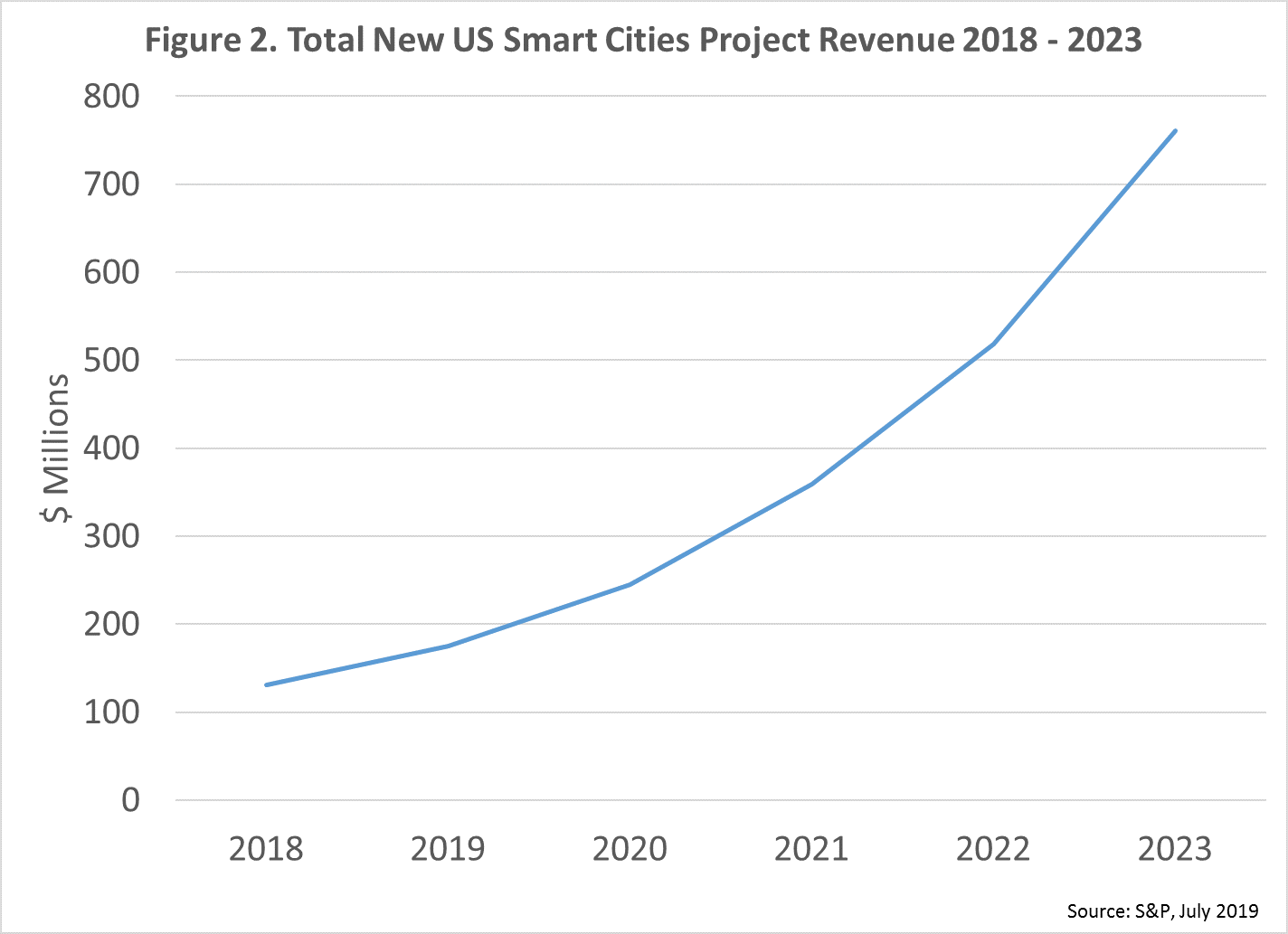 Smart cities segments that will comprise the greatest portion of revenue will be those that allow cities to realize the quickest return on investment, or ROI. The most prominent example here is smart streetlights, which involves the installation of sensors and connectivity into streetlights. It often accompanies the transition to LED streetlights from older, less efficient technologies, and offers immediate ROI for a few reasons:

2. Sensor technology can save money by turning streetlights on and off as needed depending on the presence of people or vehicles.

In addition to being a vehicle for cost savings, the streetlight can potentially become a ubiquitous smart city platform for other capabilities that may be installed later. This includes cameras for security, traffic monitoring and smart parking, or microphones for public safety applications such as gunshot incidents or automobile crashes. And since streetlights are already hooked up to electricity, power is not an issue. We estimate there were 29 smart streetlight projects launched in the U.S. in 2018, with 36 expected to launch in 2019, as the segment grows due to the continued transition to LED streetlights. This makes it the most popular single smart city segment for both years. This is expected to accelerate by 2023, when over 100 smart streetlight projects should launch, as a greater number of cities reach for the LED cost savings, and take advantage of the opportunity to install sensors and connectivity in their streetlights. And it is expected to be the highest hardware revenue generator among smart cities projects as well. Compound annual revenue growth should be 42.1% through 2023.

Another technology that offers cities a quick ROI is smart parking, which uses various types of sensors to keep track of open street or garage parking spaces within a city. It is normally attached to an app that city dwellers can consult. It offers benefits to both sides. To urban dwellers, it saves time looking for parking in congested urban areas. To cities, it increases revenues by directing citizens to nearby spaces where they will pay to park. It also offers a side benefit of reducing pollution by limiting the time cars are on the road looking for parking. Based on interviews and secondary research, we estimate that there were 17 smart parking projects launched in the U.S, in 2018, with 23 expected to launch in 2019, and 88 smart parking projects are expected to be launched in the U.S. in 2023, as more cities reach for the revenues that smart parking can bring.

Public safety is another intriguing smart city segment, though one that emphasizes citizen’s well-being over revenue generation. It involves the use of technology to protect citizens against criminal activity or other types of danger. It can include applications such as body cameras on police officers, as well as the use of camera or sensor networks to alert law enforcement to potential criminal activity, ranging from parking violations to felonies. Overall public safety hardware revenue is expected to grow at 47.4% through 2023, when public safety is expected to be the number three revenue-generating smart cities segment. This revenue is driven primarily by the extensive use of relatively expensive cameras in this segment.

Other smart cities segments focus on making citizens’ lives less difficult. One example here is auto and traffic monitoring, which includes the monitoring of road and traffic conditions under various scenarios. This could include monitoring intersections to increase safety, or monitoring traffic conditions and optimizing the timing of traffic lights to reduce traffic bottlenecks. It can also include web or app-based traffic information to assist commuters. While this is still a relatively small smart cities application now, revenue is expected to grow rapidly over the course of the forecast, at a 63.6% annual rate through 2023.

Overall, the smart cities segment shows significant potential for growth over the next several years. Driven by the dual needs for cost reduction by cities, and improved lifestyle by urban dwellers, new smart cities projects and revenues are expected to tick upward after a few so-so years, as city decision makers recognize their advantages and find the budgets to adopt them.