US digital ad market roars back in Q3'20


US digital ad market roars back in Q3'20

Most major players in the U.S. digital ad market shrugged off COVID-19-related declines and returned to annual growth in the third quarter of 2020. Social media firms such as Facebook Inc., Snap Inc. and Pinterest Inc. led the charge along with Amazon.com Inc.'s burgeoning digital ad business while growth was more sedate for Alphabet Inc. and Twitter Inc. Microsoft Corp. and Verizon Media were notable decliners in the third quarter, unable to shake off lingering softness among some brand advertisers and search ad verticals including travel and hospitality.

Alphabet's estimated annual gain of 9.9% in U.S. net digital ad revenues in the third quarter showed a marked improvement from a 6.0% decline in the second quarter, with third-quarter gains powered by strong YouTube advertising results and a resurgent search business. Lockdowns throughout much of the U.S. beginning in March heavily impacted the company's search ad revenues, but that business found its footing in the third quarter as much of America was open again.

Facebook sustained growth even amid COVID-19 lockdowns and saw gains accelerate in the third quarter when its 19.2% annual growth was not far off the 20% to 24% increases enjoyed in each quarter of 2019. Strong demand among e-commerce advertisers has helped boost Facebook results as has a general uptick in usage for a range of social media apps during the pandemic. Smaller social media rivals including Snap and Pinterest saw faster annual growth in U.S. ad revenues in the third quarter, but their revenue bases remain a fraction of what Facebook generates. 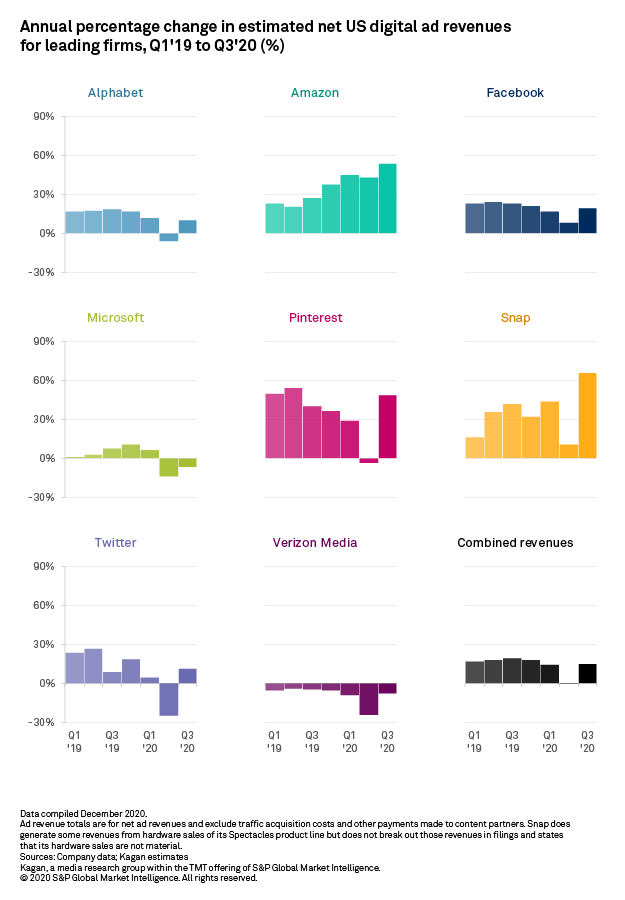 Snap and Pinterest have rapidly grown their U.S. ad businesses but their scale continues to be massively dwarfed by both Alphabet and Facebook. Advertising revenue gains for Amazon, Snap and Pinterest in the U.S. have largely come at the expense of Verizon Media, Microsoft and others instead of representing any serious inroads into the dominance of Alphabet and Facebook.

Combined net U.S. ad revenue totals for leading firms analyzed here for the first nine months of 2020 came in at an estimated $71.73 billion, rising 9.4% versus $65.57 billion in the first nine months of 2019. While the digital ad sector regained momentum in the third quarter, extremely sluggish results in April and May 2020 have weighed on combined revenues for top firms, resulting in growth in 2020 to date coming in well below levels achieved in 2017-2019 over the same time periods. 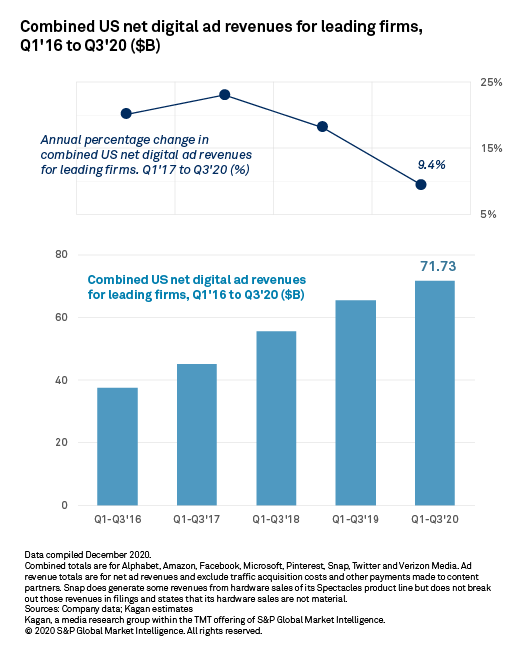 Most top firms disclosed generally positive guidance for the fourth quarter of 2020 when they held earnings calls in October, but renewed outbreaks of COVID-19 throughout much of the U.S. in November and December could jeopardize that once-rosy outlook. Holiday shopping typically propels digital ad revenues to annual peaks in the fourth quarter of each year and any additional lockdown or shelter-in-place orders could crimp digital ad gains in the critical final month of 2020.