The commercial smart building market is emerging as a key revenue driver for the industrial internet of things. Smart building project revenue is expected to increase from $731.9 million in 2018 to $6.78 billion in 2023.

This revenue growth is primarily due to the two greatest energy users in the modern U.S. workplace: heating, ventilation and air conditioning, or HVAC, and lighting. Better monitoring and control of these two energy hogs has the potential to save companies a great deal of money. Thus, monitoring is becoming more sophisticated, using elaborate software packages tied to cloud connectivity to better control usage by lowering energy expenditures while maintaining worker productivity. 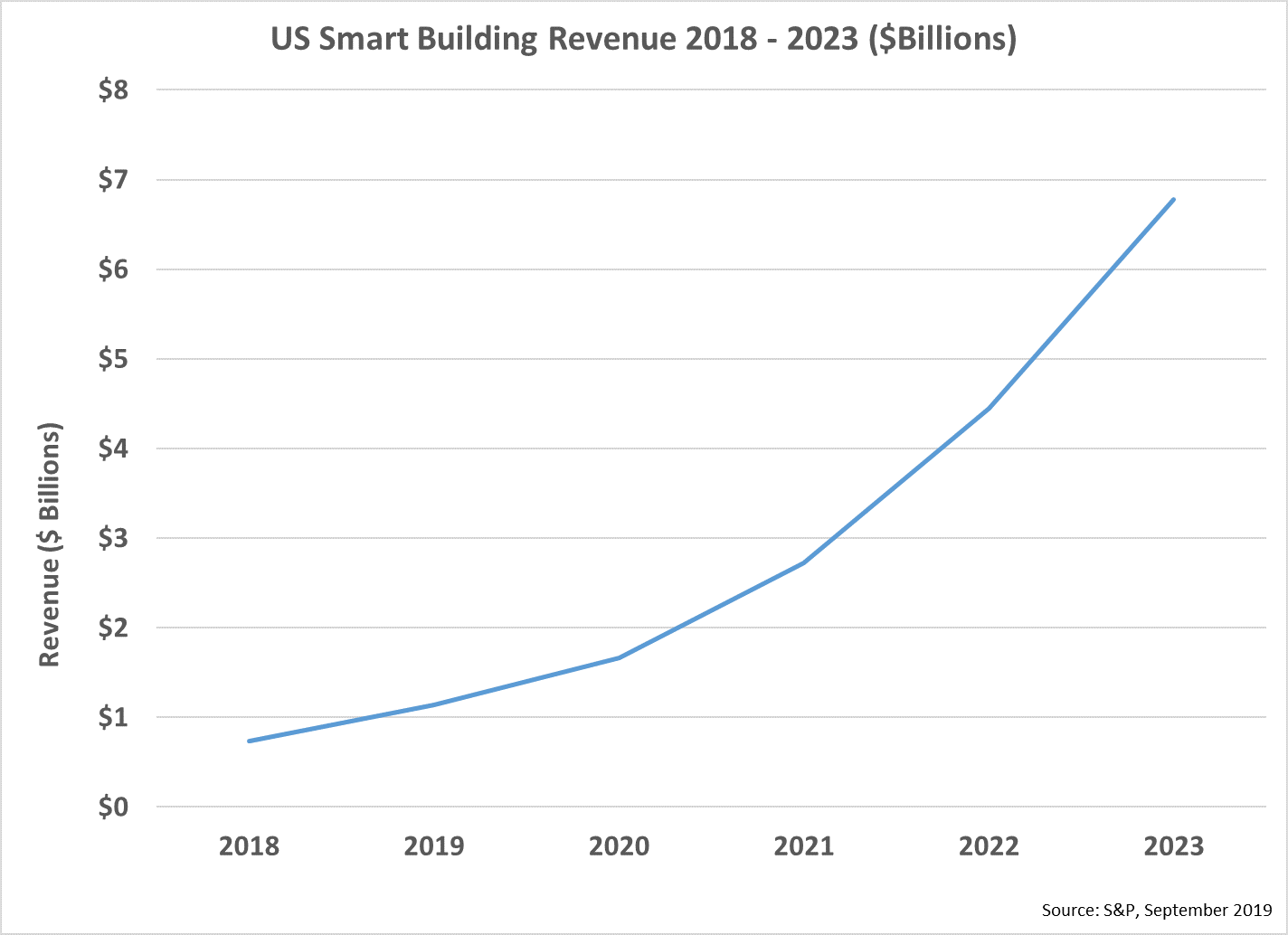 Defined by the use of cloud connectivity to better manage commercial building systems that have traditionally been handled on premises, smart building projects are well past the experimental stage, and revenue growth is expected to accelerate. The four key applications driving current projects include HVAC, smart lighting, security/surveillance, and a small “other” category that includes fire detection and building systems and operations monitoring.

HVAC is the primary target in the smart building space, because that’s where the money is. According the U.S. government’s Energy Information Administration, or EIA, HVAC was the number one power consuming application in U.S. commercial buildings. Close monitoring and control of HVAC has been a concern of building operations managers for several decades, typically using elaborate sensor networks throughout the buildings and servers to monitor all the data.

Now, however, monitoring and control are moving to the cloud, where software and analytics can substantially increase the sophistication of the process. For example, cloud-based energy management software packages receive real-time HVAC data from buildings, from temperature to humidity to air pressure to the condition of the HVAC equipment. In addition, the software ties into the building utility provider, and can adjust power consumption in real time based on environmental conditions in the building while monitoring charges from the specific utility plan that the building is on.

Lighting is the EIA’s second highest-rated power consumer in commercial buildings, so it is also a prime target for energy savings. Using sensor technology, actions taken can range from notifying building operations when a bulb has gone out to detecting the presence of people. Smart lighting fixtures can even accommodate sensor applications that are not directly related to lighting, such as monitoring environmental conditions like temperature and humidity.

Smart security and surveillance refers to the use of the cloud to collect and analyze data to secure people and property within a building. It can range from building access systems, to monitoring building and property conditions through use of cameras or other sensor technology. Much of commercial building security is dependent on the use of camera technology, both to monitor people and property. Over the past 10 to 15 years, the commercial security camera business has transitioned from closed circuit television, or CCTV, to IP technology, easing the process of moving data from the camera to the cloud.

The “other” category consists mainly of building systems that are not covered in the previous three categories. It includes fire and smoke detection, and building operations including electrical, plumbing and elevators. In terms of revenue, it is the smallest of the four applications for the smart building market, and will remain so for the duration of the forecast.

The forecast for smart building revenue by application includes hardware, software and services. The overall market forecast is for 56.1% annual growth, and is expected to be driven by a number of factors, including the following:

In specific smart building applications, HVAC is currently the largest segment of the market in revenue terms, and will remain so throughout the forecast period, increasing from $547.4 million in 2018 to $3.23 billion in 2023. Smart HVAC benefits from the installed base of HVAC sensors and electronics already installed in the well-established building operations market. The transition of that installed base only requires connecting those devices to the cloud.

Smart lighting was a relatively small portion of the overall market in 2018, but is expected to grow rapidly by the end of the forecast, boosted by the transition to LED lighting as well as the math. The number of light fixtures per floor in any office space is quite large. For this reason, the total available market for smart lighting is far larger than any other smart building application. An advanced smart lighting fixture could have multiple sensors, in addition to network connectivity, and other associated support electronics. So the sheer volume of hardware will start to multiply rapidly as smart lighting becomes more popular, particularly in the second half of the forecast. By 2023, smart lighting revenue will rival HVAC at $2.95 billion.

The market for security and surveillance is a bit more limited, as the market for on-premises security is expected to remain strong throughout the forecast period. There is less to be gained from moving security to the cloud than is the case in lighting and HVAC. The cost savings arguments are not as strong, and a strong human oversight element exists in security that does not exist in the more automated worlds of HVAC and lighting. However, to the extent that security cameras are primarily IP-based now, the ability to stream video to the cloud is enhanced, so there is likely value in sophisticated cloud-based analytics that will grow over time. Kagan expects that cloud based security revenue will surpass $430 million in 2023. 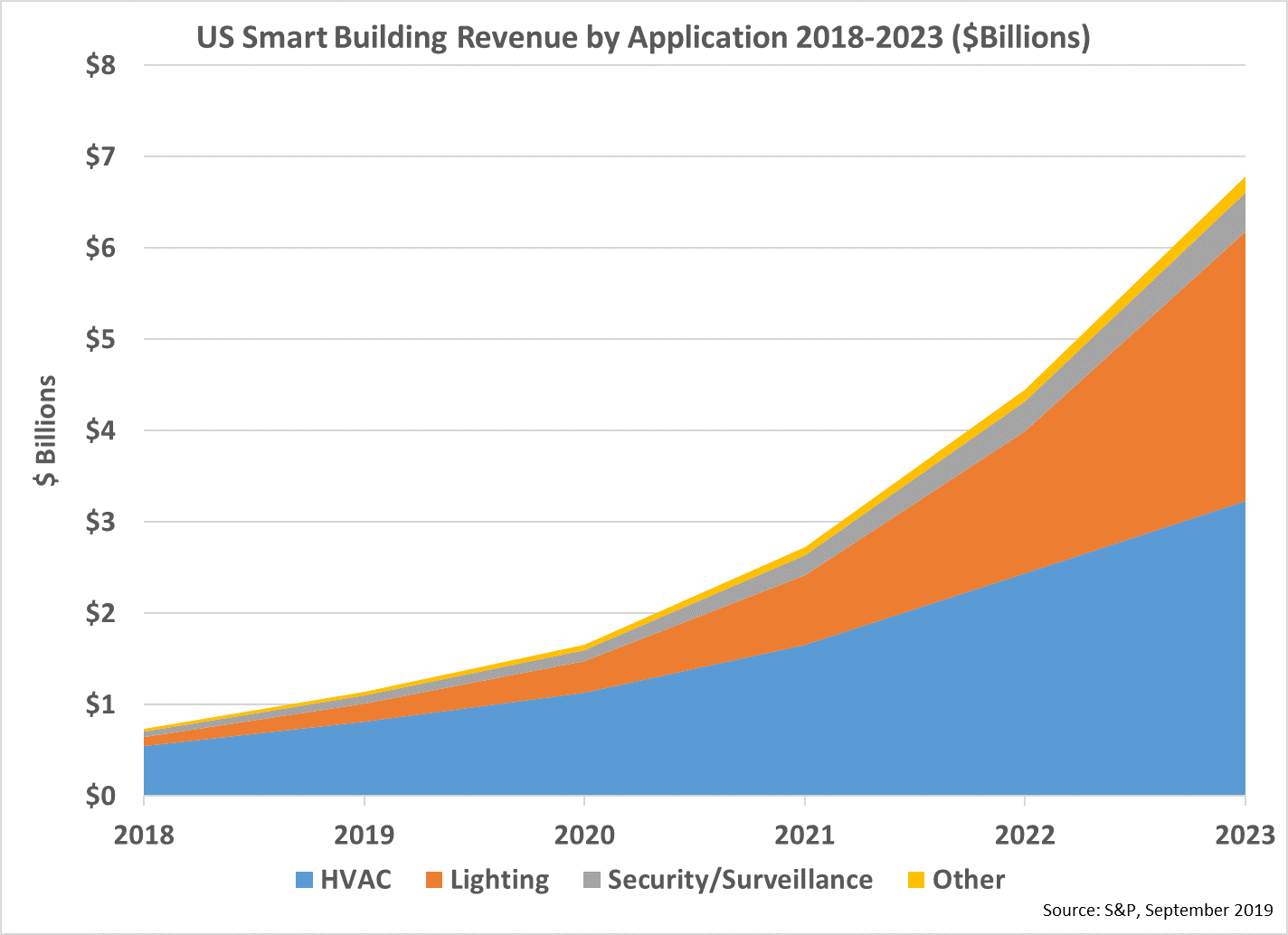 Overall, the smart building market in the U.S. is prospering, as everyone from small businesses to giant property managers look to save money through the use of applied technology. The market is currently wide open, with IoT platform vendors, property managers, software and hardware vendors scrambling for a piece of the pie. Over time, as the market matures, the vendors will stabilize to a certain extent, as partnerships among the various types of vendors solidify, and as smaller players leave the market or are acquired.