COVID-19 containment measures are sending data consumption through the roof as homebound individuals and families are forced to rely on broadband for life imperatives and entertainment amid the crisis.

Early returns on data usage indicate a spike in traffic, with loads climbing across the board. Though users are concerned about rising connectivity for home-based work and school arrangements, traditional peak prime-time hours do offer headroom for mounting broadband traffic.

Based on an analysis of usage metrics by OpenVault, a supplier of industry analytics for broadband providers, consumption jumped in the business week starting March 9, with the average weekly downstream usage up 28% from the previous week. The average upstream consumption increased 17% over the same interval.

On March 16, downstream consumption surged 81% from the same day the week before, while upstream consumption increased 59%. Of note, Federal and State officials began rolling out measures to slow the COVID-19 pandemic in earnest in the week starting March 9, confining swaths of Americans to their homes. 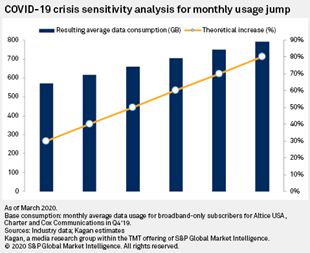 The pledge revolves around access to Wi-Fi hotspots to all Americans, late fee waivers and a 60-day moratorium on service termination due to inability to pay.

Aside from the above, other measures essentially focus on boosting download speeds.

With government-imposed confinement measures becoming more stringent by the day, further increases in household data usage can be expected, essentially driven by the following:

Of note, Comcast/NBCU has announced the VOD availability of theatrical releases/movies currently in theaters. Other studios might follow suit.