US Broadband Only Homes Surge In Q3 Ahead Of Disney+ Launch


US Broadband Only Homes Surge In Q3 Ahead Of Disney+ Launch

The segment of wireline broadband homes not subscribing to traditional multichannel was fast closing in on 30 million ahead of The Walt Disney Co.'s launch of Disney+, growing 7.1% sequentially in the third quarter.

At third-quarter 2019 levels, an estimated 29% of wireline HSD households do not subscribe to traditional multichannel. Overall, the segment grew by 1.9 million households sequentially in the three months ended Sept. 30, contributing to a 6.5 million-gain year-over-year. 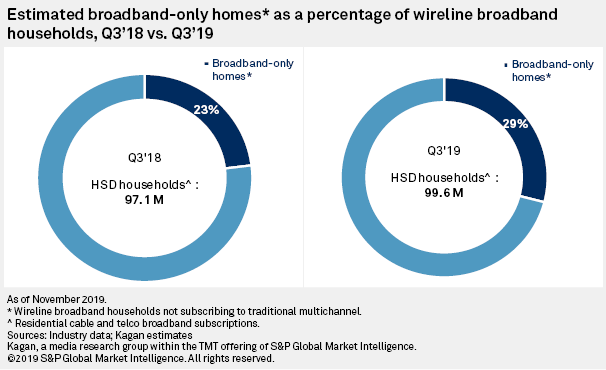 Their share of the total is down an estimated seven percentage points from the year-ago level, however, implying a widening gap between the video and HSD subscription trends among smaller-to-midsize MSOs and telcos, which often serve more rural, HSD-access-lagging areas.

The implications are clear: the market forces that have impacted traditional home video entertainment in the larger, typically more urban markets are likely to yield the same results in the nation's more remote areas as broadband availability seeps in.

The advent of cable's and telco's high-speed data services paved the way for the rise of streaming video, ultimately resulting in traditional multichannel cord-cutting.

With the Disney Empire striking back in the streaming wars with the launch of Disney+ Nov. 12, the wireline broadband-only segment could very well swell in the remaining weeks of 2019.

The slated launches of Comcast Corp.'s Peacock and AT&T Inc.'s HBO Max in the second quarter of 2020 can only contribute to steepening the segment's upward trajectory. 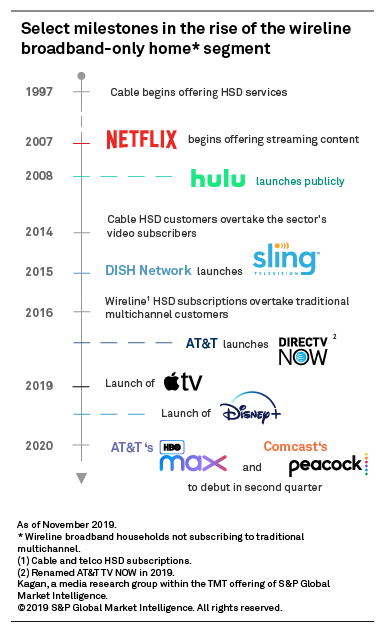 Our estimates of the broadband-only universe do not take into consideration those households relying solely on wireless technology for their broadband needs.