Trends And Themes On Building Successful Video Content: A Review Of The Global Dynamics Of Television Conference


Trends And Themes On Building Successful Video Content: A Review Of The Global Dynamics Of Television Conference

Global video content producers have begun to realize that looking purely internally for ideas is no longer the right way to find really successful concepts, according to trends explored at the Global Dynamics of Television conference, held in London in October. Many are branching out beyond their borders for trends in content development to bring the next big idea to their home markets, while also eyeing the potential for global distribution.

It has not gone unnoticed by producers that average TV viewing time has been declining in recent years across most of the main TV markets. Interestingly, Italy is bucking this trend. 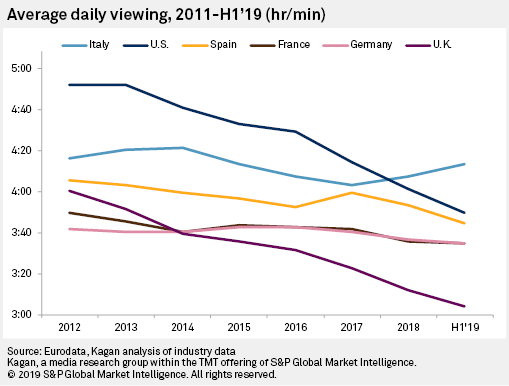 The overriding question for content makers and channel managers is how consumers pick content. Today, the question of live versus time shifted viewing and also whether viewers decide to commit to watching the content or not also come in to play.

1. Familiarity – how comfortable are viewers with the subject matter and is it of interest?
2. Personality – what are the characters that are being portrayed in the show like? Do the consumers want to be in their company? If not, is it still appealing to watch?
3. Relevance – how does this content reflect on viewers’ lives, is it relevant?
4. Recommendations – Recommendations from a friend or third-party such as an influencer are important. Is it the latest hit show? Do viewers seek influencers for content choices?

Peek suggested that these content creation tent poles can be used to help instruct on how compelling content can be constructed to work at home and globally.

The audience reaction is key for producers and the panelists view is that the viewer does not consider content in terms of a genre or whether it is a ratings success, as these are predominantly broadcast industry measures. An audience looks for a sense of expectation, a program's potential for emotional appeal and how accessible and relevant, or identifiable, it is.

The panel discussed two areas, scripted and non-scripted content, in an effort to identify themes that work, from which content makers can draw inspiration.

The panel discussed how themes like crime and punishment, the environment, singing and emotional TV work around the globe.

HBO's “I Love You Now Die,” SundanceTV's “No One Saw a Thing” and Arte's “Sex Slaves in the Catholic Church” were cited as compelling examples of crime and punishment and of telling the story of horrible crimes by asking not just who, but why.

Environmental content is looking for answers and providing them in such shows as “Green Blood” from France TV. Singing shows such as American Idol are a constant feature of schedules, but certain nuances are seen in different regions. For example, in Asia, programs such as “Superband” demonstrate how bands rather than individuals are more popular, a factor reflected in the Korean phenomenon of K Pop.

Emotional content, France 3's “La Boite a Secrets” as an example, features celebrities discovering secrets about themselves, while Spain's “El Cielo Puede Esperar” goes to the extreme of staging a celebrity's funeral to judge people's reaction to their death. Secrets and truth drive an emotional reaction.

In the scripted content space themes such as crime, politics, diversity and sports can be used to produce successful content globally.

Crime-based drama seeks to answer the questions of who did it as well as why the crime was comitted. “15 Days” from the U.K.'s Channel 5 and “Criminal” on Netflix Inc. with its international appeal were both cited as dramas that did both of these things well. “15 Days” delivered a 57% increase in slot average during its first transmission. With fake news dominating world headlines, authenticity in politics and political drama was identified as the most important ingredient for success. Sky Ltd./HBO's “Chernobyl” and the UK's Channel 4 with “Brexit: The Uncivil War” each contain this authenticity and were subsequently successful.

The ability to laugh at yourself and others in a way that is not offensive is one of the key elements of comedy, so diversity as a theme can be seen in the Comedy Central USA series “Alternatino with Arturo Castro,” while “Arab Work” from the Hot Comedy Channel in Israel and the French series “Faites Des Grosses” demonstrates the same comic style in different countries.

Within sports and sports documentaries, Glance's Head of Insight, Avil Blondelot suggested internal themes were present that covering 'teens, behind the game, a hero's redemption, biographies and the lone star'.

Having identified themes that might travel successfully, the discussion ended with an acknowledgement of the importance of the audience. John Peek closed the event by concluding that audiences are smart, "smarter than us" and "never stop judging" as "dedicated students" who spend "3.5 hours of homework (TV watching) every night". The challenge is to keep up with audiences and "understand the drivers that pull them in or push them away. We need to understand the recipe of great programs and what makes them a success."