Thomas Cook Bankruptcy Case Study: What Were The Warning Signs?

On September 23, 2019, while operating 100 aircrafts, 180 eponymous hotels and resorts, and more than 560 shops employing 21,000 people, Thomas Cook entered into liquidation.1 The size of its debt, coupled with the scale and complexity of its business, made it difficult to find an administrator willing to manage its operations.

As the UK-based company’s airline, stores, and hotels are snapped up by rival businesses, we look into what S&P Global Market Intelligence Credit Analytics risk indicators were telling us about the company long before its eventual demise.

The Changing Tide in Credit Quality

Source: S&P Global Market Intelligence as of October 31, 2019. For Illustrative purposes only.

As of the reporting date December 31, 2018, 10 months before the company filed for bankruptcy, Thomas Cook fell into the ‘ccc’ territory and was unable to recover. Thomas Cook’s failure to recover was because of company-specific, as well as systemic issues, which resulted in mounting debts (the bulk of which were accumulated from its merger with MyTravel), falling returns, and a reluctance from lenders to extend financing. These issues included:

The analysis of the one-year Fundamental PD for Thomas Cook indicated that the company’s implied credit scores were in the ‘ccc’ range for the final quarterly reporting periods December 31, 2018 and March 31, 2019. Credit risk was particularly heightened after the reporting period for FQ3 2018 compared to the 14 prior quarterly reporting periods between FQ2 2015 and FQ2 2018, when the implied credit score was consistently in the ‘b’ range. This change from ‘b’ to an eventual ‘ccc’ was largely due to a decline in Thomas Cook’s total equity from positive figures of £195MM on average in the 10 reporting periods from FQ1 2016 to FQ3 2018 to approximately -£1.3BN on December 31, 2018. This was further exacerbated by an increase in debt of £500 MM between FQ4 2018 and FQ1 2019.

Going back to the reporting date for September, 30, 2013, Thomas Cook had a PD of 1.87%, which was outperforming the median benchmark of 2.42% for Hotels, Resorts & Cruise Lines. This was the last period in which the PD was less risky than the benchmark, more than six years before the company filed for insolvency. By March 31, 2017, although the PD was at a level that was worse than the median benchmark, it was still better than the poorest performing 25% of its UK peers. This trend continued until December 31, 2018 when it finally dropped into the worst quartile, with a PD of 21% compared to the quartile benchmark of 7.81%. In other words, the company did not just see an increase in risk in absolute terms, but also on a relative basis.

Fundamental PDs for the reporting period ending July 29, 2017 (FY 2017), which separates the model inputs into Business Risk (systemic and company-specific indicators) and Financial Risk (financial ratios), showed these risks at their most negative extremes. This, therefore, shows the real challenges for the business, with vulnerable and highly-leveraged scores, respectively, as seen in Exhibit 2. The most impactful factors driving the worsening of the PDs were:

Thomas Cook experienced a large loss fall in its total equity, from positive to negative figures (a five-fold decrease from £291MM to -£1.3BN), between September 30, 2018 and December 31, 2018. This was one of the main contributing factors to a PD increase in the second to last reported quarter. The decrease in total equity was a result of persistent negative retained earnings during the final 10 reporting periods, due to net income losses for seven out of those 10 reporting periods. The net losses were a result of slim operating profit margins, a significant impairment of their MyTravel business of approximately £1.1BN, coupled with interest expenses that were, on average, over £100M per annum for the past 10 reporting periods. This compared to average operating income of approximately £260m over this period. In the last reported quarter, Return on Net Capital saw a significant downward movement, particularly due to large cash outflows to suppliers and hotel partners, with cash and short-term investments falling by 106%. Operating income also fell by 38%.

Thomas Cook’s diminishing margins and liquidity issues were exacerbated by the oversized debt of £1.9BN that the company was unable to service, all of which created conditions that eventually pushed the company to file for insolvency.

Source: S&P Global Market Intelligence as of October 31, 2019. For Illustrative purposes only. 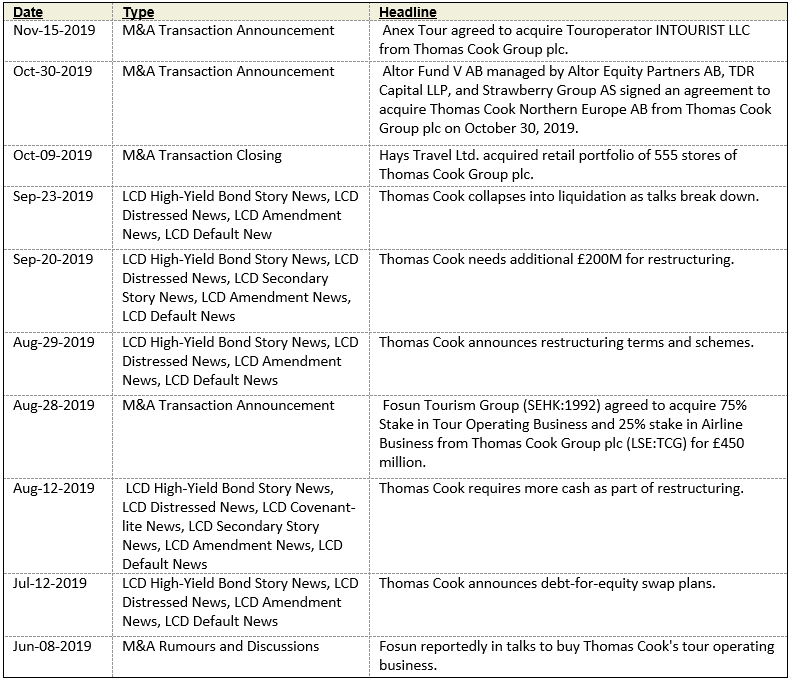 Source: S&P Global Market Intelligence as of November 28, 2019. For Illustrative purposes only.

The S&P Global Market Intelligence Credit Analytics suite of statistical models includes data, analytics, and workflow tools that can be used to assess and monitor the creditworthiness and loss profile for millions of companies and exposures.

1 Unless otherwise noted, all information sourced from the S&P Capital IQ platform as of November 18, 2019.
2 S&P Global Ratings does not contribute to or participate in the creation of credit scores generated by S&P Global Market Intelligence. Lowercase nomenclature is used to differentiate S&P Global Market Intelligence PD scores from the credit ratings used by S&P Global Ratings.
3 Source: The Guardian, Why did Thomas Cook collapse after 178 years in business?, September 23, 2019:
https://www.theguardian.com/business/2019/sep/23/thomas-cook-as-the-world-turned-the-sun-ceased-to-shine-on-venerable-tour-operator