The Worst Is Yet To Come: Ad Agencies Expect Q2 Revenues Below '09


The Worst Is Yet To Come: Ad Agencies Expect Q2 Revenues Below '09

The world's Big Four advertising groups agree it is too early to predict the precise effects of COVID-19 on their businesses over the year. Publicis Groupe SA, Interpublic Group of Cos. Inc., Omnicom Group Inc., and WPP PLC reported their first-quarter results, highlighting declines in Asia while expecting their results from the rest of the world to be hit the hardest in the second quarter. Advertising budgets started to fall in March for Europe and the U.S., and the four agency groups' CEOs warned of the pandemic's more worrying impact on the second quarter, with expectations for double-digit declines in revenues.

During the quarterly conference call, Arthur Sadoun, CEO of Publicis, said, "In March, the rate of decline has been more dramatic than anything we have seen in the past." Discussing second-half and full-year expectations, all four groups agreed on the unpredictability of the pandemic's impact and the time frames for a return to revenue growth, with hopes for a recovery sometime between 2020-end and early 2021. 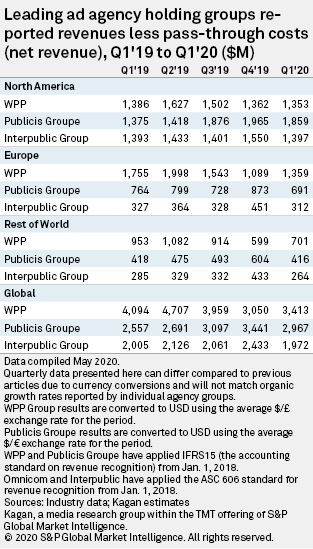 European agencies took a larger hit in the first quarter, with total organic declines of 3.3% for WPP and 2.9% for Publicis. Omnicom and IPG saw almost flat organic growth at 0.3%, but expect a steep decline in the next quarter. In terms of regional results, COVID-19 impacted revenues in Asia throughout the quarter, and from March in Europe when lockdown enforcements began. U.S. and North America revenues began to slip toward end-March, too late in the first quarter for an appreciable impact.

For Asia, IPG saw organic revenue decline by 5.3% in the first quarter, WPP saw an 8.6% decline (off 21.3% for China) and Publicis was down 1.9% (off 15.3% for China). Omnicom saw 2.0% organic growth in the region, with growth in Australia and India partially offsetting a 2.5% decline in China. According to Magna Global forecasts, China, the second-largest ad market in the world, has never experienced ad spend declines since Magna began tracking the metric, with ad spend originally expected to grow by 8.8% in 2020.

The ad agencies' European revenues, which started declining in March, also saw quarterly organic declines across the board. Omnicom reported European markets declined by 2.3%, excluding the United Kingdom, where the group's revenue grew by 3.7%. IPG reported organic growth of 1.2% in the U.K. and a 1.8% decline in the rest of Europe. WPP reported U.K. and Western Europe results declining by 4.2% and 3.7%, respectively, and Publicis reported a 9.2% organic slide for Europe. 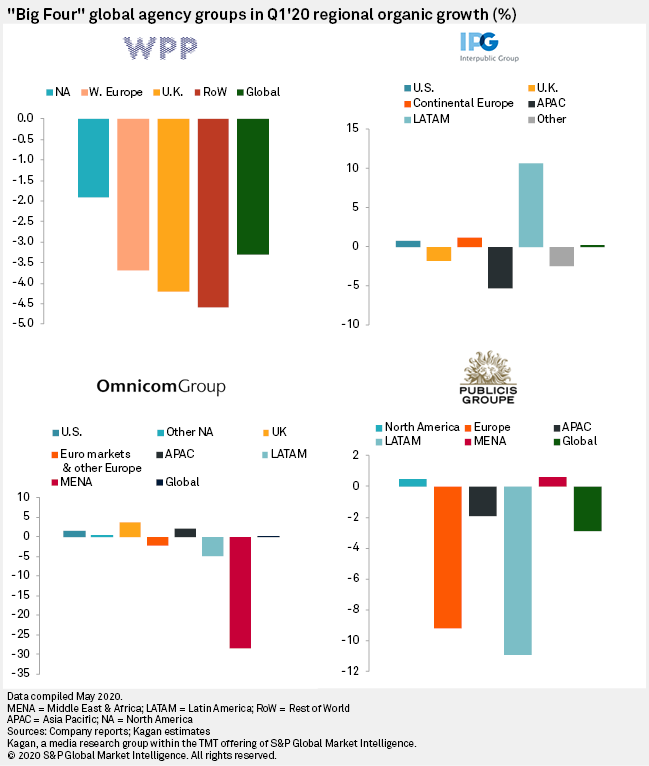 WPP announced organic growth performance for individual major markets, for the first quarter versus the month of March, indicating a significant decline in March not reflected in the total-quarter numbers. China's double-digit declines are set to improve in the next quarter, but European markets, including Italy, which had already declined by 16.2%, are forecast to perform even worse in the coming months. 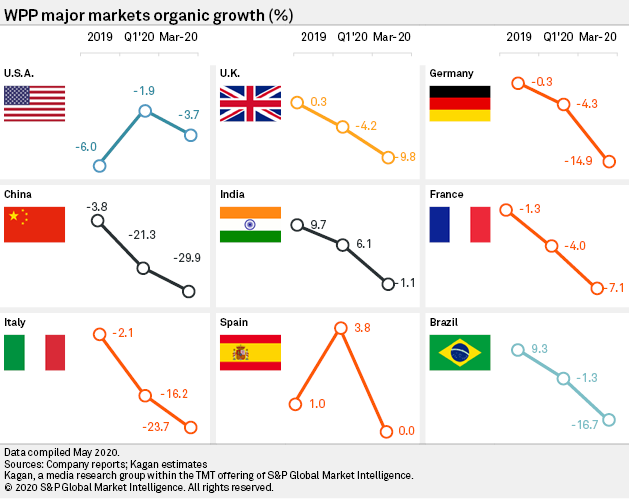 Each company has taken measures to mitigate costs during the pandemic. All have frozen new hiring and salary increases and minimized freelancers. To control costs further, the agencies are utilizing three options: salary sacrifice, furloughs where available, and staff reductions. Publicis and Omnicom senior executives have taken a 20% to 30% salary reduction. WPP executives also saw salary decreases, while over 3,000 of its senior managers sacrificed about 20% of their salaries. IPG executives also had voluntary sacrifices and managers took a 10% pay cut. Omnicom is pushing to take full advantage of furloughs where possible, Publicis is pushing employees to take annual leave, while WPP said it prefers introducing part-time work and a reduced working week to be prepared for when business recovers. Publicis reported that the measures taken at a group and country level are set to lead to €500 million in cost savings and WPP reported it's set to save £700 million to £800 million.

WPP also suspended dividends to shareholders and its share buyback program, saving an estimated £1.1 billion in cash, while Publicis announced a 50% cut in its dividends, which have been delayed to September. Omnicom also suspended its share repurchase program. IPG announced it has no plans to change its dividend policies. CEO Michael Roth said during the company's conference call that "given the level of visibility we have today, the actions we have taken to date and the potential for economic recovery later this year and into 2021, we do not think that action on the dividend is required at this point in time".

By the end of March 2020, Publicis reported €4.7 billion in available liquidity, similar to last year's €4.4 billion level. Of that, €4.0 billion is in cash and marketable securities, including the €2 billion in revolving credit facility it drew preventatively.

WPP reported £4.4 billion in available liquidity as of March 2020, with £1.7 million in cash. The company had net debt of £2.8 million, significantly reduced after the company's diversifications, including its sale of The Kantar Group Ltd.