Subscription OTT revenues in Russia to exceed $230 million in 2020


Subscription OTT revenues in Russia to exceed $230 million in 2020

Kagan expects those revenues will exceed $230 million in 2020.

We believe the stagnation in the multichannel sector and the potential for broadband expansion in the rural areas of Russia, also called "the regions" will help drive the adoption of subscription OTT close to 25% by 2025.

Increased anti-piracy awareness, COVID-19 induced restrictions in outdoor activities coupled with a plethora  of streaming options, mainly by local players, have all contributed to the growth of online video revenues in Russia.  Kagan expects those revenues will exceed $230 million in 2020. We believe the stagnation in the multichannel sector and the potential for broadband expansion in the rural areas of Russia, also called "the regions" will help drive the adoption of subscription OTT close to 25% by 2025.

Six streaming services have managed to accumulate notable market shares in the Russian subscription landscape, five of which are owned and operated by local media groups. Similar to other markets hit by COVID-19, stay-at-home restrictions in Russia led to services adding a significant portion of their total subscriber bases during the first half of the year. 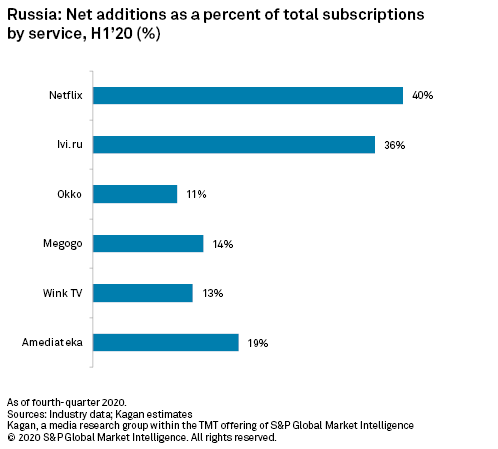 Most of the available OTT video services in Russia follow a hybrid revenue model strategy combining transactional VOD coupled with free-ad funded content. In recent years, OTT providers have begun upselling subscriptions to their registered users. This way they've managed to increase average revenues per user as the attitude toward paying for content is improving.

Following on the footsteps of Amazon.com Inc. with Amazon Channels and Apple Inc. with Apple TV, Russian media groups have been employing online video distribution strategies by aggregating third-party streaming apps into their OTT platforms. By strengthening their content portfolio to include both local and international titles, premium sports and live streaming TV networks, they're able to position as a viable alternative to a pay TV bundle at a competitive cost but without requiring commitment to a long-term contract. Examples of OTT service aggregators include Okko (Rambler Group), Wink TV (Rostelecom PJSC), Kinopoisk (Yandex) and NTV-Plus Online (JSC Gazprom-media Holding). Pure content aggregators include Amedia Zao (Home of HBO), ViP Play (Viasat World Ltd.) and The Walt Disney Co.'s FOXNOW which are some of the most widely available streaming services in Russia.

International Players Behind 91 Of OTT Video Subscriptions In Spain