Subscription over-the-top video services face a considerable amount of competition in Singapore, given the different entertainment options available, both legally and illegally, to consumers. OTT players, however, continue to stake claims in the market by focusing on sustaining subscribers through wider distribution and differentiated content.

Kagan estimates OTT video paid subscriptions in Singapore penetrated 36% of broadband households in 2018 and should grow at an approximate 10% CAGR over the next five years.

HOOQ continues to evolve as it has focused on improving consumer engagement and innovation since the service launched in Singapore in 2016. The OTT player introduced 17 free new channels in the first quarter as part of its live TV feature. HOOQ also continued to strengthen partnerships within the region, particularly with Southeast Asia’s major online-to-offline mobile platform, Grab, as well as an expanded collaboration with major local telco, Singtel.

By June, users of the Grab app in Singapore can expect HOOQ integrated into the platform, which provides them access to popular local and international titles, original series as well as free-to-view channels. Meanwhile, the OTT player’s multimillion dollar partnership with Singtel is intended to bring HOOQ even more telco subscribers in Singapore.

PCCW Ltd.'s Viu has remained relevant by positioning South Korean content at its core while still maintaining its pan-regional strategy, wherein the OTT player has supplemented its content offering with localized original content in its different areas of operation.

Netflix Inc. continues to increase its investment on regional content since its global rollout in 2016, while still providing a potentially attractive content offering for a global audience. In November 2018, the OTT player held a content showcase in Singapore where it presented 17 new Asian original productions.

It has also maintained partnerships with local telcos StarHub Ltd. and Singtel. Netflix’s collaboration with the latter allows new Netflix subscribers who registered through Singtel access to a month’s free subscription. This partnership also provided an alternative payment option to subscribers. Through the Netflix direct billing feature, telco subscribers can opt to consolidate their subscription to the OTT service with Singtel.

Amazon.com Inc. launched Prime Video in Singapore in December 2016 as a stand-alone video offering. Its Prime membership was launched a year after, making Singapore the first Southeast Asian market to experience the service. Such an initiative may help the OTT service with brand recognition and eventually reach more customers.

The selected subscription OTT services are modestly priced given that they fall below 0.5% on our affordability index, which is based on price as a percentage of the country's estimated gross national income purchasing power parity, or GNI PPP. Based on this affordability, pricing does not seem to hinder subscription OTT uptake as it does in some markets within the region. 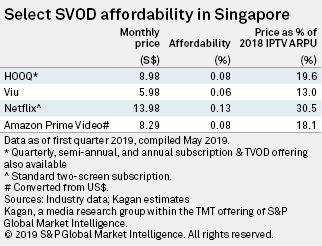 The same calculation puts Singapore’s dominant multichannel platform in the reasonably priced range since it ranks 0.4% on our affordability index, although it would seem to be priced at a premium when compared to the selected subscription OTT services.