Smart cities project adoption continues to be slow and disjointed, as Kagan's database of smart cities programs across large U.S. cities demonstrates. This new Kagan coverage includes 68 active and planned projects across the 20 most populous U.S. cities, and demonstrates that smart cities programs are coming online on an ad-hoc basis, with no single technology vendor showing the ability to market its technology in a systematic way across major U.S. cities. In addition, the economic uncertainty and revenue challenges related to the COVID-19 pandemic will make funding planned and future projects uncertain.

Smart cities projects offer opportunities to save money, increase revenues and enhance the lifestyles of citizens, but they are also showing less upside than was anticipated a few years ago. At that time, smart cities programs were meant to usher U.S. big cities into the future on a wave of technology. Programs were expected to inform and aid citizens and boost businesses while saving cities millions of dollars through everything from easing city permitting to better deploying law enforcement to decreasing traffic jams. And while some cities have benefitted from smart program deployments, the benefits have been somewhat sporadic. Many deployments are expensive, return on investment is taking longer than expected, and municipal budgets are experiencing pandemic-related strain. Budgetary issues could have a particular impact on cities that are in the planning stages of smart cities programs, including Washington, D.C., Denver and Los Angeles.

These goals can be met with less expense by employing technology rather than utilizing other, less automated methods, so smart cities projects will continue to grow, although not at the rate previously expected. 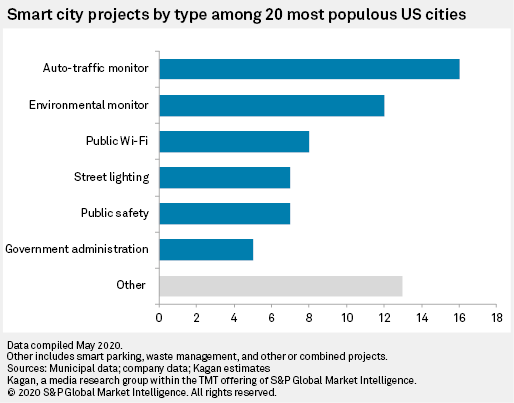 The leading project type among large US cities is auto and traffic monitoring, as 16 of 20 cities have projects in place or in the planning stages. This category includes monitoring traffic patterns via sensors or cameras to determine peak traffic times in different areas of the city, or monitoring specific automobiles for traffic or parking violations. While this is not a new application—cities have been tracking auto traffic for years—the internet of things, or IoT, brings a new level of sophistication and the ability to monitor traffic in real time. Associated analytics enable decision making and relaying information instantly. IoT can also help to focus on specific problems. One example is a partnership between Siemens Ltd. and the City of New York, where Siemens' camera-based Automatic Bus Lane Enforcement (ABLE) system tracks unauthorized vehicles stopped in bus lanes, enabling vehicle ticketing or towing.

Some auto and traffic monitoring projects go beyond a single city's borders. For example, Vision Zero is an international initiative to reduce road traffic fatalities through many different means. A few cities are using IoT to support Vision Zero. Denver has launched a project to use cameras and road sensors with a goal to improve traffic and pedestrian conditions in some of the most high-traffic areas within the city. And New York has partnered with Amazon to launch a mobile app with an up-to-date map of road fatalities and injuries throughout the city.

Auto-traffic monitoring is popular because it meets many needs that cities have. First, traffic monitoring projects can increase the flow of traffic, saving commuters' time. Second, reduced time for cars on the road and less stop-and-go driving can reduce automobile emissions, helping cities improve air quality. It can also help city revenues by increasing ticketing and resulting fines.

Environmental monitoring is the second most popular program among the 20 largest U.S. cities, with 12 programs in place or planned. It is a broad category, and can include air quality monitoring, litter monitoring as well as sewage and water level monitoring. Air quality monitoring is the most popular, and most established environmental monitoring project. For example, New York City has been conducting regular IoT air quality surveys since 2008, and other cities also have well-established programs. This gets directly to quality-of-life issues for municipal citizens, and sets a baseline for cities to measure their air quality to know whether they need to reduce it. This is a federal as well as local issue, as the U.S. Environmental Protection Agency (EPA) oversees federal air quality policy that affects large cities.

New developments have both eased and expanded the collection of this environmental data. The rise of smart street lighting projects means that air quality sensors are increasingly found in hundreds of locations throughout a city with smart programs, compared with the dozens of established, dedicated air quality monitoring stations. This creates many more data points spread over a greater area of a given city, resulting in better, more targeted data about air quality. San Diego has been a leader here, and has installed 4,200 air quality sensors in streetlights since 2017, in cooperation with its partners AT&T, Intel and GE.

Other environmental monitoring projects include Chicago's City Digital project that monitors water levels and flood danger, and also reduces pollution into the Chicago River and Lake Michigan. This is one of the older environmental smart city projects among big cities, as it was launched in 2016 in conjunction with Microsoft.

Public Wi-Fi projects are quite popular, with eight extant or planned projects among the 20 largest U.S. cities, and demonstrate a variety of municipal strategies. Most of these projects aim to provide Wi-Fi access only in specific parts of the city. This contrasts with more ambitious citywide programs of the 2000s that attempted to blanket cities with free Wi-Fi coverage. The previous programs mostly failed due to slow speeds, technical problems and high costs. The newer programs target specific city segments. For example, the city of Charlotte is partnering with Microsoft to provide free Wi-Fi on public buses. Other programs are more ambitious. San Francisco's SFWiFi provides Wi-Fi in 33 city parks and other public spaces, as well as a number of government buildings, and portions of Market Street. Other programs are targeted, such as Columbus' announced project with the Central Ohio Transit Authority to make information on public transportation, autonomous vehicles and bike share programs wirelessly available.

Public safety programs are the fifth most popular smart city programs, with seven cities involved. This application mostly applies to law enforcement programs, but can also pertain more broadly. For example, Los Angeles and AT&T have partnered on an earthquake warning project with results that are available via a publicly available app.

Law enforcement smart city programs are primarily being driven by a company called ShotSpotter Inc. that provides a sophisticated set of acoustic sensors to triangulate the location of gunshots. The sensor systems are generally placed well above the ground, on buildings or on street light poles, and dispersed throughout a city. ShotSpotter technologists evaluate potential gunshots and notify local law enforcement when they are confirmed. New York, San Diego and San Francisco are all currently using ShotSpotter technology, and the company claims just under 100 U.S. cities as customers.

Street lighting technology has been adopted by seven of the 20 cities. This technology refers to the transition to LED street lighting, which also must include the ability of street lights to be monitored remotely via wired or wireless connectivity for maintenance purposes. Smart lighting is not only a smart city application itself, but can serve as the basis for several other smart city programs. In addition to air quality monitoring and acoustic sensors for law enforcement, street lights can accommodate cameras to monitor automobiles or people and motion detectors to turn lights off when pedestrians aren't present. Light poles can also be used simply as platforms for radio technology to meet specific needs. In 2016, Los Angeles installed low power wide area network (LPWAN) radios on streetlights to collect gas company smart meter information transmitted from nearby homes.

Waste management is a small but interesting smart city application. It involves using wireless sensors connected to the cloud to remotely monitor trash levels in receptacles throughout a city. This allows trash pickups to be scheduled only when necessary, thus potentially reducing municipal labor and fuel costs. The sensors can be powered by solar or battery. The most established program among large U.S. cities is between New York and BigBelly, which manufactures the smart receptacles. The project was launched in 2012, and has grown to 174 cans.

The large technology companies that are represented among the 20 largest US cities smart cities vendors are dispersed among hardware and software companies, and service providers. Though the smart cities category has been a target of many of these leading technology companies for years, evidence of success is somewhat limited among America's largest cities. Microsoft and AT&T are the clear leaders among these firms, as Microsoft has seven projects and AT&T six. However, other companies, including GE, Google and Verizon have been less successful, with two projects for each of these three firms. 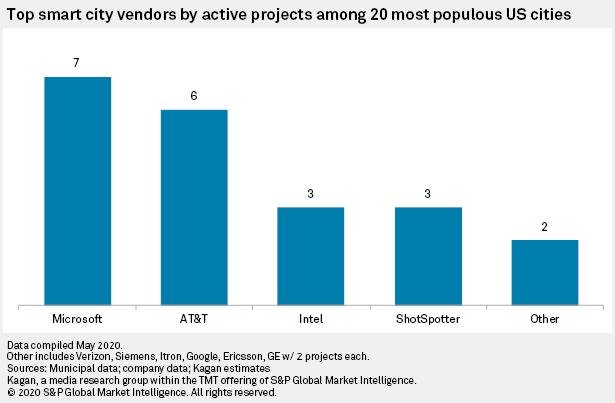 One issue with regard to vendors is the lack of scalability of smart cities solutions. Smart cities technology vendors must sell to many different municipal governments of different sizes, each with their own specific requirements. And though the number of smart city project types is large, there are no must-have applications that are universally in demand. This creates a somewhat confused market on both the vendor and city sides, and contributes to relatively slow adoption.