The global nickel market is still dealing with the aftermath of China's Tsingshan Holding Group Co. Ltd.'s potential game-changing battery nickel supply announcement. On March 3, the company revealed plans to process nickel pig iron, or NPI, which is typically used by the stainless steel sector, into high-grade nickel matte that can be converted into nickel sulfate for use in the electric vehicle battery sector.

The announcement turned investor excitement based on expectations for long-term EV battery nickel excess demand into concerns over the potential for oversupply. The London Metal Exchange three-month nickel price reacted by dropping from a seven-year high of $20,110/t in trading Feb. 22 to $15,948/t March 30, the lowest since November 2020.

Prices ranged between $16,000/t and $16,500/t for most of April but surged to close above $18,000/t May 7 on market optimism regarding the global economic recovery. News that China's CNGR Advanced Material Co.Ltd. and, most notably, Australia's Nickel Mines Ltd. are also planning to convert NPI into nickel matte for the battery sector has, however, kept concerns over the potential for long-term battery nickel market oversupply in investor's minds and has prevented prices from settling above $18,000/t. Rising inflationary fears caused the LME three-month nickel price to drop from $17,968/t May 18 to $17,325/t May 19. Nickel has consequently underperformed versus other industrial metals such as copper and iron ore so far in 2021. 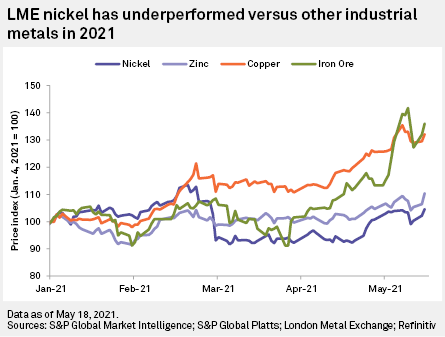 Tsingshan plans to produce nickel matte and NPI in Indonesia, with volumes dependent on market demand and prices. Economics will therefore be a significant factor in determining the amount of nickel matte that it will convert from NPI. Given Nickel Mines' close relationship with Tsingshan, with Nickel Mines previously acquiring interests in Tsingshan's two rotary kiln electric furnace plants from Shanghai Decent Investment (Group) Co. Ltd., a Tsingshan Group company, and both companies having operations in Indonesia's Morowali Industrial Park, Nickel Mines' NPI and nickel matte production costs may be indicative of Tsingshan's.

On May 3, Nickel Mines announced that it had signed a memorandum of understanding with Tsingshan's Shanghai Decent for two of its rotary kiln electric furnace, or RKEF, NPI production lines in Indonesia to be converted to enable production of a nickel matte product suitable for sale into the EV battery market. The modifications are expected to involve the addition of a nickel matte production circuit to the lines at either the company's Hengjaya RKEF or Ranger RKEF and will cost approximately $1 million per line, according to Nickel Mines. 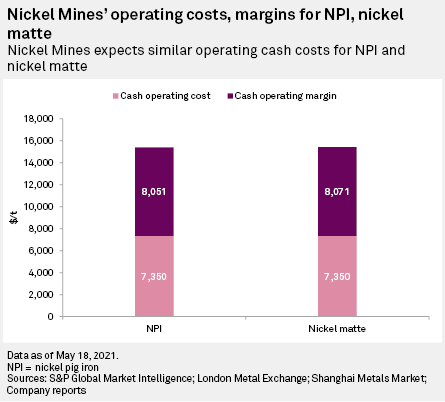 …but we believe this is unrealistic 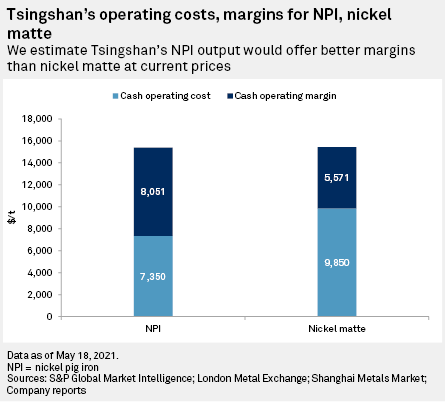 Although Tsingshan's nickel matte production could be less profitable than its NPI output, we anticipate that the group may see its nickel matte strategy as a first step into the lithium-ion battery value chain. It could then move up to produce higher-value-added nickel-containing battery-related products in the longer term. Tsingshan's next move may be to convert its nickel matte into nickel sulfate, a component of such batteries. 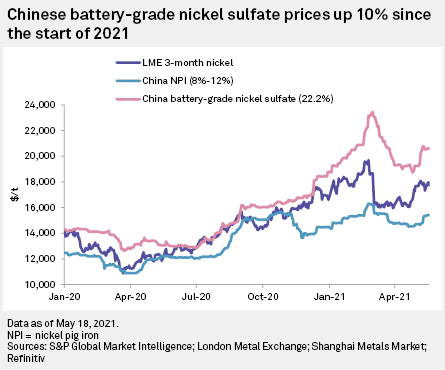 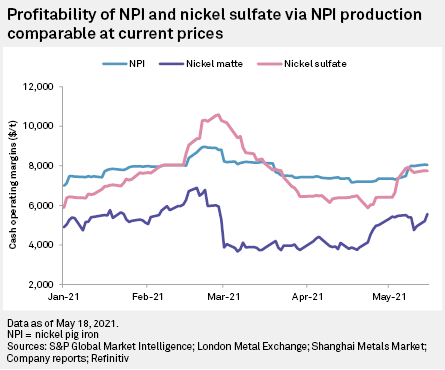 The potential for higher margins, as nickel demand from the passenger plug-in EV battery sector expands on increasing plug-in EV penetration rates in the long term, may encourage Tsingshan to move to converting nickel sulfate from its nickel matte. 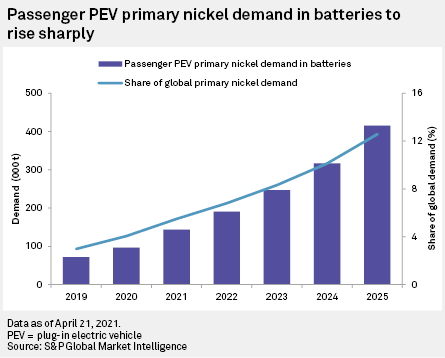 Rather than selling this nickel sulfate to the market, we anticipate that Tsingshan could also use the material for its own lithium-ion battery plants. The company said in April that it aims to expand its annual production capacity for lithium batteries from 6 GW currently to 200 GW by 2025 as it looks to meet growing demand for such batteries in China. As part of this ambition, the group plans to invest $1.57 billion to build a captive lithium-ion battery plant in China's Guangdong province.

We believe that concerns over the potential environmental impact of Tsingshan's NPI/nickel matte production strategy will be a significant headwind to its long-term success, given the EV industry's key role in the wider green revolution of the global economy.

We previously highlighted that the global warming potential from the production of nickel in ferronickel, a higher-grade version of NPI, is 3.5 times higher than that of LME-grade class 1 nickel production. The environmental, social and governance implications of this may deter EV battery producers outside China from using nickel-containing battery-grade products derived from Tsingshan's nickel output.