Broadcast networks are likely to have a tough road ahead due to the coronavirus and its lasting impact on the industry. Networks are bearing blows from multiple areas, including advertising, retransmission fees and programming, with the loss of sports arguably one of the biggest problems. Lack of big sporting events will likely be a great shock for revenues. Although the Olympics are now scheduled to air in 2021, over $1 billion is at stake this year for Comcast Corp.'s NBC.

If we look at the Big Four networks' performance over the past two decades, the Olympics provided gains in years that may have otherwise ended in losses. In 2002, following the dotcom bust and 9/11, ad revenues grew 5.5%, but if you take out the Olympics, the figure falls to a loss of 2.1%. A similar situation arose in 2008 during the Great Recession: The ad revenue decline was 2%, compared to a 7% deficit lacking the Olympics. 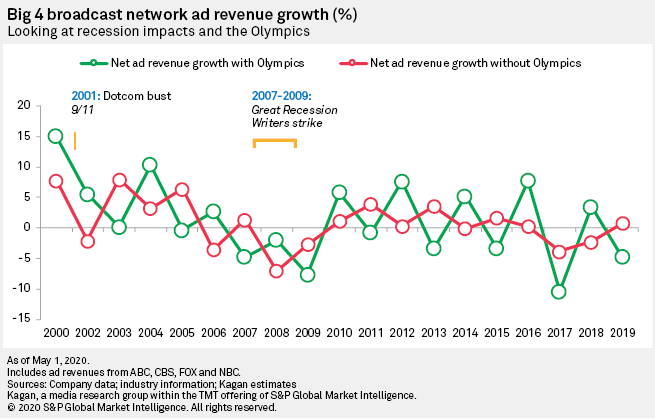 If the impact stopped at the Olympics alone, that would mean a significant hit to advertising this year. However, there are unprecedented sports postponements for the NHL and the NBA, possibly meaning the end of the season for both. The start of the MLB season was similarly delayed. If the NFL debut is hindered as well, that would result in big losses on the most lucrative TV network contract in sports and would take an immense chunk out of advertising.

Other programming has also been upset, including a stoppage in production, which could ripple through scheduling and lead to a serious lack of new content. This includes a delayed pilot season, making it difficult to produce the fall prime-time roster and leading to the upfront's cancellation, which many speculate may be permanent. Fewer pilots may necessitate the return of some shows that were "on the bubble" for renewal in the 2020-2021 season.

However, some programming does not necessarily involve people in close physical proximity, including certain reality, animation and "filmed from home" types. Examples so far include late-night TV, Rachael Ray from home, the "Parks and Rec" reunion, "SNL: Home Edition" and "American Idol." Other ideas flying through the market involve boosting the schedule with more reality and variety programming ("Disney Family Singalong: Volume II") and a return of theatrical films and other acquired shows.

Programming has gone through slowdowns in the past, most notably due to the writers strike of 2007-2008, when networks scrambled to fill their available airtimes with mostly reality content, due to a halt in scripted shows.

When production does resume, there are likely to be additional problems with planning around talent's schedules. This and issues with cost cutting from some networks may slow the need for programming production. The originals industry has been hot for TV in recent years, but this could be the point at which many networks just bow out of making their own programming due to lack of funds or declining audiences. As less programming is produced, this could have far-reaching outcomes down the line, such as lost revenues for secondary windows.

While people may be watching more TV, we expect that cord cutting and shaving will continue to hurt the long-term outlook for retransmission fees. Overall, an accelerated decline in multichannel subs, particularly given missing sports, could result in broadcast networks having less of a leg to stand on when negotiating the station/network split for retrans with their affiliates.

One bright side may be subscription video-on-demand services, with ViacomCBS Inc.'s CBS All Access ahead of the pack. NBCU launched Peacock in beta last month and will go national in July. Hulu LLC is another service that offers broadcast content, with distributors receiving a share of the revenues.