Less than four years after demonetization nudged India toward cashless payments, another exogenous shock is setting the stage for a more rapid acceleration in digital payments. As financial technology and e-commerce companies are digitizing millions of mom and pop stores that traditionally deal in cash, S&P Global Market Intelligence expects mobile payments to gain a greater foothold in commerce.

Unlike Apple Pay or other mobile wallets that allow customers to make electronic transactions using a linked debit or credit card, popular payment apps in India enable customers to pay directly from their bank accounts and thus promote an alternative to cards.

By comparison, point-of-sale transactions completed using debit and credit cards, including online and in apps, rose 24% to $204 billion. While a large number of transactions handled by payment apps include peer-to-peer transactions, mobile phone account recharges and utility bills, mobile payments are increasingly becoming a popular payment choice for retail transactions at the point of sale and online. While card purchases at brick-and-mortar stores were roughly $103 billion, about $62 billion of UPI interbank transfers represented in-store payments. 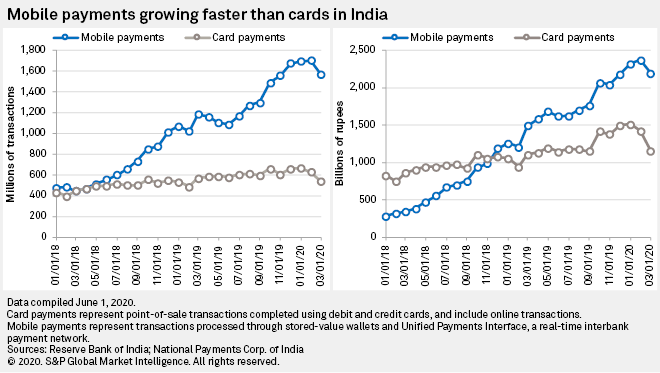 For mobile payments, there are plenty of person-to-merchant transactions to chase in India. Total retail expenditure online and offline at the point of sale exceeded $806 billion in 2019, according to 451 Research, which is part of S&P Global Market Intelligence.

Much of the growth potential exists in the form of offline transactions, with in-store sales accounting for more than 96% of total retail sales in 2019. We estimate that card purchases and UPI mobile payments represented only 21% of $781 billion in in-store transactions in 2019 as cash remains the primary payment method for the majority of merchant payments.

Leading the mobile payment landscape are Google Pay, Walmart-owned PhonePe and Alibaba-backed Paytm. Amazon Pay, which entered the UPI space in mid-2019, has yet to match the popularity of the three UPI incumbents, but Amazon invested $255 million in 2019 to scale up its payment businesses. Facebook's WhatsApp, a popular messaging app with more than 400 million users in India, is expected to scale up its payments features. We expect these five companies — Google, PhonePe, Paytm, Amazon and Facebook — to dominate the mobile payments landscape in India.

Google’s search for dominance in payments

Google has long been iterating on its payments strategies and expanding in countries by primarily allowing people to digitally store credit cards in Google Pay and make online purchases and contactless payments in stores. While its card integrations require a number of partnerships with banks or payment aggregators in other countries, Google's association with UPI sponsor banks ensures that customers of various banks can use Google Pay and transact with account holders at any UPI network bank without having to use their debit or credit cards. 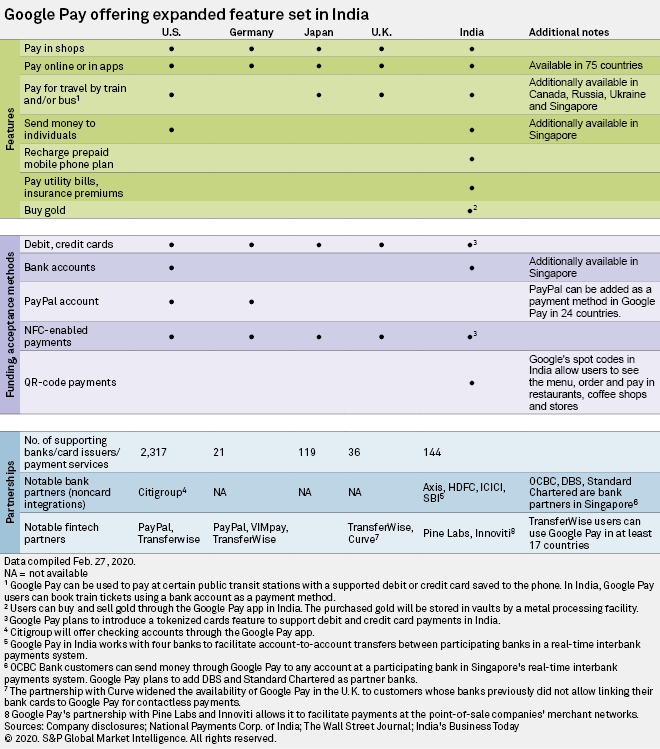 Amazon's payments strategies globally involve facilitating easier payments for buyers on its own e-commerce platform as well as giving consumers the option of paying with their Amazon accounts on external websites and in merchant apps. On both fronts, Amazon has made rapid strides in India.

Joining the UPI bandwagon has enabled it to provide a popular payment option and fueled Amazon Pay's rise as a high-frequency payments platform. Amazon Pay’s expanded features include movie, bus and flight ticket bookings, which were built in partnership with bookmyshow.com, red Bus and cleartrip, respectively.

For Amazon and Google, payments are just means to propel their existing e-commerce and advertising businesses. Paytm and PhonePe, on the other hand, are using payments to acquire customers and build digital ecosystems of financial services and commerce from scratch. All four companies are heading in the direction of building an interconnected set of in-app services, providing options to fulfill daily needs in seamless ways.

In the absence of a clear path to profitability, Paytm and PhonePe will continue to need venture capital support to fuel their expansion plans. The current climate of subdued private funding makes it difficult for startups to get venture capitalists to open up their purses.