OTT Winners, Losers In The Age Of COVID-19

Over-the-top video services might seem to be obvious winners as people around the world go into mandatory or self-imposed quarantines, but the outlook remains uncertain for most operators. The popular subscription video-on-demand model is based on fixed-rate pricing regardless of consumption, so popular SVOD services such as Netflix Inc., Amazon.com Inc. Prime Video, and HBO Now do not directly benefit from a short-term spike in consumption.

Hybrid services such as ViacomCBS Inc.'s CBS All Access and Hulu LLC that offer an ad-supported tier might be more likely to see a bump in advertising revenues. Many major sports leagues around the world are pressing the pause button and big advertisers potentially shift digital ad spend that might otherwise have gone towards live sports on linear TV.

Complicating matters, though, is that ViacomCBS and The Walt Disney Co. — the respective parents of CBS All Access and Hulu — derive a relatively small percentage of their revenues from their OTT offerings, with any gains from digital advertising minimized when compared to losses felt across their other operations. Most major SVOD services are operated by larger parents such as Amazon, Apple Inc., AT&T Inc. and big media companies with much larger revenue streams outside of their video offerings that could face far more downside there from the impact of the novel coronavirus. 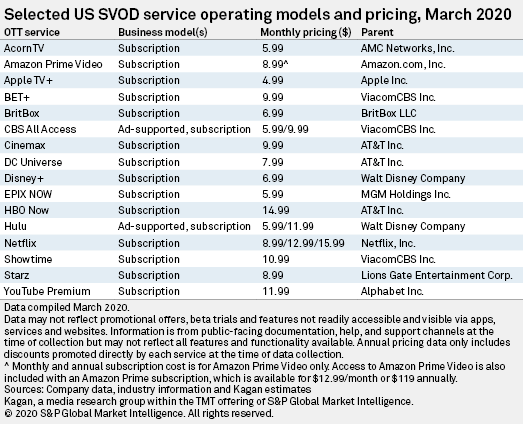 Some costs for OTT providers also rise along with increased consumption, with services impacted to varying degrees depending on the content delivery network model employed. As the amount of OTT viewing goes up, so does the OTT provider's cost of delivery, since CDN services are usually charged for the amount of content delivered. SVOD services with flat monthly fees that see a spike in viewing hours because subscribers are staying home could face a greater challenge because their revenue per subscriber will not increase.

However, advertising-based services may see their ad inventory increase as viewing hours increase, thereby allowing their revenues per viewer to grow as costs grow. OTT providers such as Netflix, Amazon and YouTube LLC that have their own CDNs are in a better position to control their delivery costs than OTT providers that rely on third-party CDN providers.

The near-term outlook, in general, could be rosier for free, ad-supported services offered by YouTube, Roku Inc., Pluto TV, Tubi, Vudu and others, although a protracted economic decline might also cause advertisers across the board to scale back their digital ad spend. Data from Kagan's recent MediaCensus online consumer survey shows that YouTube dominates in the ad-supported video-on-demand space, with nearly half of respondents indicating they use the service while the closest competitors barely cross into double-digit percentages. However, just over a third of respondents (36%) indicated they use more than one of these services. 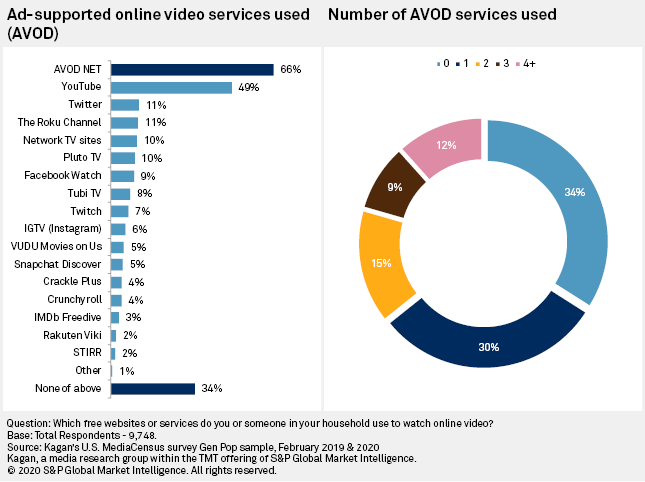 YouTube's massive global audience of over 2 billion monthly viewers gives it the most upside in the short run — plus the service could see a bump in YouTube Premium subscriptions that turn off ads among other perks — but its massive digital ad business also faces the most downside in a global recession or depression. YouTube's gross global ad revenue of $15.15 billion in 2019 represented just 11.2% of the total gross ad revenues of $134.81 billion in revenues that Google hauled in for the year. Any bump in YouTube revenues could be easily overwhelmed if Google's overall ad revenues fell by 20% or more on an annual basis in 2020. 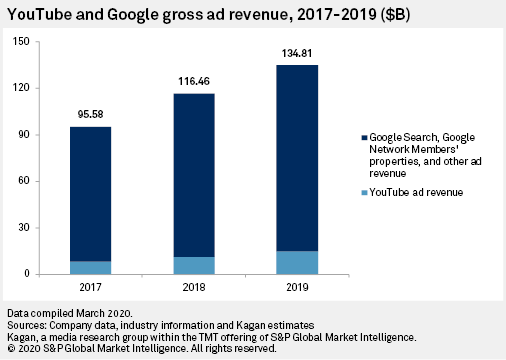 New OTT launches planned for 2020 including HBO Max, Peacock and Quibi Holdings LLC could see a sizable impact from COVID-19, with some filming and production for certain series already disrupted. Comcast Corp. had planned a significant marketing push for Peacock tied to the 2020 Summer Olympics and Quibi's launch without a sizable back catalog or major corporate parent could be challenging in the middle of a pandemic. The $14.99/month price point of HBO Max might also be more intimidating for price-conscious consumers facing economic uncertainty, although most SVOD services remain relative bargains compared to other forms of entertainment in "normal" times.

Some SVOD services might see a bump in new subscribers if quarantines drag on for months and consumers dig deeply into available services looking for new content, although economic pain in an extended shutdown might also force some subscribers to pare back their total number of SVOD subscriptions. Online consumer data from our 2020 survey shows that SVOD service use is still increasing in the U.S., with over half of internet households surveyed indicating that they use more than one SVOD service at 51%, up from 48% in 2019. With the launch of new services like Disney+, consumers are in many cases adding on to their existing subscriptions, as can be seen in the share of households using four or more services increasing while those using one or two services decreased. 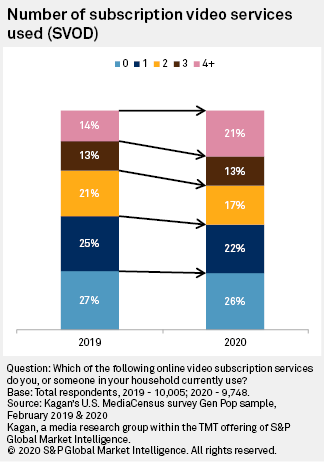 Survey data presented in this article is from the general population sample of the MediaCensus surveys conducted in February 2019 and 2020. The MediaCensus samples include 10,005 (2019) and 9,748 (2020) U.S. internet adults matched by age and gender to the U.S. Census. The survey results have a margin of error of +/-0.3 percentage points at the 95% confidence level. Survey data should only be used to identify general market characteristics and directional trends.