Opportunities And Challenges For African Telecommunications Industry At Africacom 2018


Opportunities And Challenges For African Telecommunications Industry At Africacom 2018

Revenues under pressure in free-to-air broadcasting

Affordability and innovation are key for MNO's strategies

Top executives of the telecommunications industry convened at AfricaCom 2018, held Nov. 13-15 in Cape Town, South Africa, to discuss challenges and opportunities in Sub-Saharan Africa. One of the main challenges in the market is lack of access to electricity. Orange SA's Middle East and Africa division is tackling this problem by offering solar kits. Meanwhile, a key opportunity rests on the sports rights market with local and international players exploring alternatives for monetization. While MNOs explore initiatives to improve affordability. These new trends are happening while data transmission speeds for the region improve because of a new submarine cable between the Americas and Africa.

Collaboration is the cornerstone for ICT development

Collaboration with policymakers is a key ingredient for a successful information and communications technology, or ICT, development program. Olabiyi Durojaiye, Chairman of the Board of Commissioners of the Nigerian Communications Commission, encouraged government, regulators and private stakeholders to collaborate in order to propel the Sub-Saharan African ICT sector. Durojaiye invited governments to declare access to ICT services a human right. He proposed tax holidays, deductions in duties and general incentives to encourage aggressive investments in telecommunications infrastructure and development of new technologies to bring cheap and affordable ICT to the region.

The Sub-Saharan African multichannel market is dynamic, with operators competing across platforms to capture a bigger share of the growing pay TV market. Whereas direct-to-home satellite is the leading platform in South Africa, digital terrestrial television pay TV services in Nigeria and Kenya captured market leadership in the past five years. In this environment, Kwese launched DTH services in several African markets in 2017, but after only 18 months started to phase out some of the operations due to unfavorable conditions. Joseph Hundah, CEO of Econet Media Ltd., said Kwese entered the DTH market at the wrong time.

Revenues under pressure in free-to-air broadcasting

Kagan estimates free-to-air TV, or FTA, reached close to 60% of TV households in Sub-Saharan Africa by year-end 2018. Interestingly, according to Deepak Mathur, EVP Global Sales at SES SA, Sub-Saharan African free-to-air broadcasting revenues represent less than 10% of the revenues generated by the pay TV industry. This is in sharp contrast to other regions, where FTA generates more revenues than the pay TV industry.
The Sub-Saharan Africa media market is not a stranger to global trends in the advertising market. Advertisers are starting to shift their advertising investment toward digital media. Aynon Doyle, head of policy analysis and research at MultiChoice Africa Ltd., mentioned that TV advertising revenues in South Africa are beginning to drop for pay TV operators and broadcasters.

Opportunities in the sports rights market

Robert Klein, CEO of Bundesliga International, commented on the efforts to promote Bundesliga content in Sub-Saharan Africa. Klein said they had a partnership with StarSat to provide Bundesliga content to its subscribers. According to Klein, Bundesliga is also investing in local talent, producing lifestyle documentaries and developing content solutions to increase awareness in the region. This strategy aims to erode the Premier League dominance in the region.

Angola Cables' South Atlantic Cable System's cable between Brazil and Angola has significantly improved connectivity between the Americas and Africa. The new cable began commercial operations in September 2018. SACS is expected to improve routing of internet traffic in the southern hemisphere, significantly reducing latency. According to Angola Cables estimates, latency between Fortaleza, Brazil, and Luanda, Angola, declined from 350 milliseconds to 63 milliseconds. Furthermore, the latency between Miami, Florida, and Cape Town, South Africa, two major data centers, has been reduced to 163 milliseconds from 338 milliseconds. The capacity of the new system is 40 terabytes per second using four fiber pairs.

Demand is surging with big carriers in Africa and Latin America, with OTT providers as the primary users. Three months after launching, the company is using two of the four cables, which translates to SACS operating close to 50% capacity. 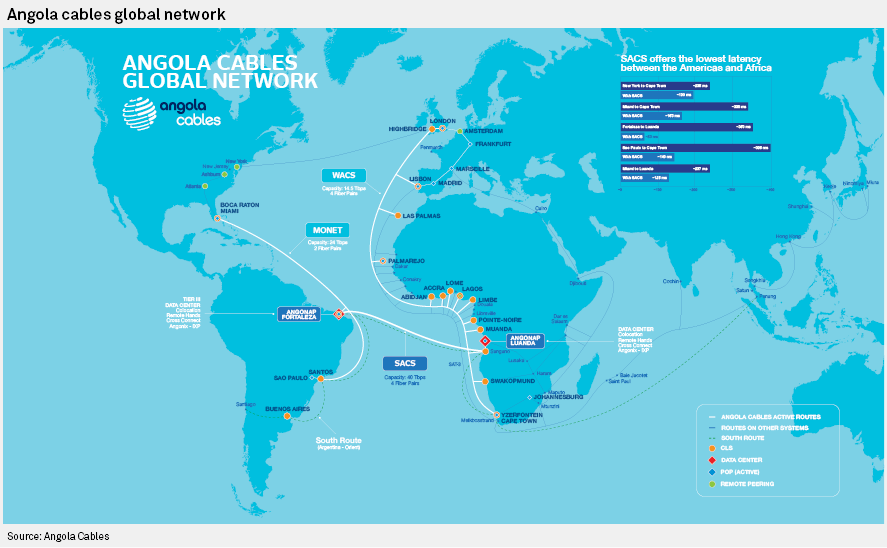 Innovation to tackle lack of electricity

Low electricity penetration, lack of infrastructure and low affordability are the primary challenges for the telecommunications industry in Sub-Saharan Africa. Confronted with these factors, operators are forced to innovate to reach potential customers. Some of the operators shared their recent initiatives at the conference. To tackle the lack of electricity, Alioune Ndiaye, CEO of Orange Middle East and Africa, said Orange developed solar kits that allow customers to recharge their devices; the solution is available in seven African countries.

Sub-Saharan Africa mobile network operators are eager to contribute to the development of a strong information and communication technology industry in the region. Operators presented key strategies for helping the region bridge the digital divide. Kagan estimates mobile subscription penetration in Sub-Saharan countries such as Kenya, Nigeria and South Africa was above 50% in 2017; however, 4G penetration remained limited.

At the conference, Huawei Technologies Co. Ltd. pledged to be a partner in the digital development of Sub-Saharan Africa. Fernando Gordo Jimenez, director, chief transformation office in the Carrier Business Group at Huawei, indicated that talent, regulation and funding are the keystones for a successful national information and communication technology, or ICT, program.

The Sub-Saharan African mobile telecommunications market is highly dependent on 2G and 3G technologies, which limits operators' ability to monetize value-added services and mobile connectivity. In the three Sub-Saharan African mobile markets we cover, namely Kenya, Nigeria and South Africa, prepaid accounts for 93% of total subs; moreover, all had single-digit ARPUs in 2018. In the same year, 4G penetration over total subs is below 15% in the three markets. Currently, mobile network operators, or MNOs, are highly dependent on traditional voice and SMS revenues, thus we think developing strategies that monetize high-value services and mobile connectivity will be key for revenue growth in the coming years. MNOs tackled this topic at AfricaCom 2018.

MTN Group Ltd. CEO Rob Shuter presented key initiatives within MTN's strategy to become a digital operator and introduced an affordable smart feature phone. The company aspires to becoming a digital player offering communications, rich media, mobile financial and e-commerce services. MTN’s strategy rests on five pillars: coverage, handsets, affordability, service bundling and education. In this respect, the company introduced a new smart feature phone that will provide internet connectivity through 3G and Wi-Fi, Bluetooth and GPS using the KaiOS operating system. The new device is priced between $20 and $25, which should help the company tackle affordability challenges in the region. Shuter mentioned ARPU in the region was around $4.00 and the price of 1 GB of data in Nigeria was $1.80. MTN is aiming to provide value-added services; on this topic, Shuter announced plans to reinvigorate its mobile money offering and the acquisition of Simfy, a music streaming service. According to Shuter, MTN's mobile money service is present in 14 markets and is aimed at reaching 60 million customers in the next two years from 26 million in 2018.

Alioune Ndiaye, CEO for Middle East and Africa at Orange SA, also announced a partnership with KaiOS to offer affordable smart feature phones in Sub-Saharan Africa. In addition, Ndiaye described some of the initiatives the company is implementing in the region such as its €50 million entrepreneurship fund and its mobile money platform. Local partners are essential for ICT development; thus, Orange tries to support local entrepreneurs through its fund. The Orange mobile finance application is a vital part of its Africa strategy with 40 million active customers.

During a panel discussion with top African MNO executives, Nicholas Rudnick, Liquid Telecommunications Ltd CEO, said the company is using digital solutions to connect with local entrepreneurs for the installation of fiber networks. At the same panel, Mohamed Dabbour, CEO for Africa at Millicom International Cellular SA, stated collaboration between MNOs and policymakers is critical for achieving a successful ICT development program.