On average, each country holds about 482 MHz each for mobile services.

Colombia ranked sixth in terms of spectrum allocation at only 365 MHz.

In the next two years, regulators across the six mobile markets we cover in Latin America are widening spectrum inventory in the low and mid-bands with the 700 MHz and the 3.5 GHz bands standing out.

In Latin America, total spectrum for six covered markets Argentina, Brazil, Chile, Colombia, Mexico and Peru totaled 2,893 MHz at the end of 2018, up by 120 MHz compared to 2017. The year-over-year gain follows Mexico's June 2018 2.5/2.6 GHz auction. On average, each country holds about 482 MHz each for mobile services, with Colombia ranked sixth in terms of spectrum allocation at only 365 MHz, while Brazil ended 2018 with the most at 620 MHz of total spectrum. 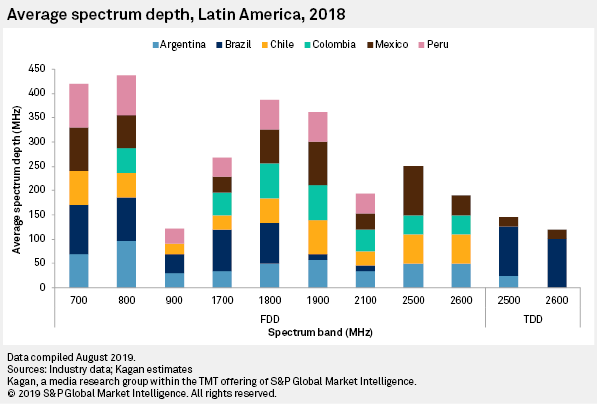 Although markets across Latin America are experiencing a burgeoning base of 4G LTE subscriptions, growth has been comparatively slow in Colombia and Mexico. Both countries closed 2018 with 4G LTE subs as of total mobile subs in the mid-20% range. Regulators from both countries are expanding spectrum inventory in the low frequency range due to cheaper costs associated in utilizing it.

In the case of Mexico, a large chunk of the "beachfront" spectrum — or 90 MHz within the 700 band — is allocated to ALTÁN Redes S.A.P.I. de C.V.'s Red Compartida, becoming the only player in the market to have access in it. However, its network build-out reached only 36% of the total population at the end March 2019, and this has yet make a strong enough impression for mobile operators to ink any roaming agreements.

For Colombia, tower expansion has been slow due to a delayed spectrum auction in the low band. Telecom regulator Ministerio de Tecnologias de la Informacion y las Comunicaciones, or MinTIC, is looking to auction off bands within the 703-749 MHz and 758-803 MHz bands, a total of 90 MHz, in October 2019. Rural areas were marked as priority areas for deployment, so 4G will likely only improve as soon as blocks are assigned to carriers by the end of 2019. 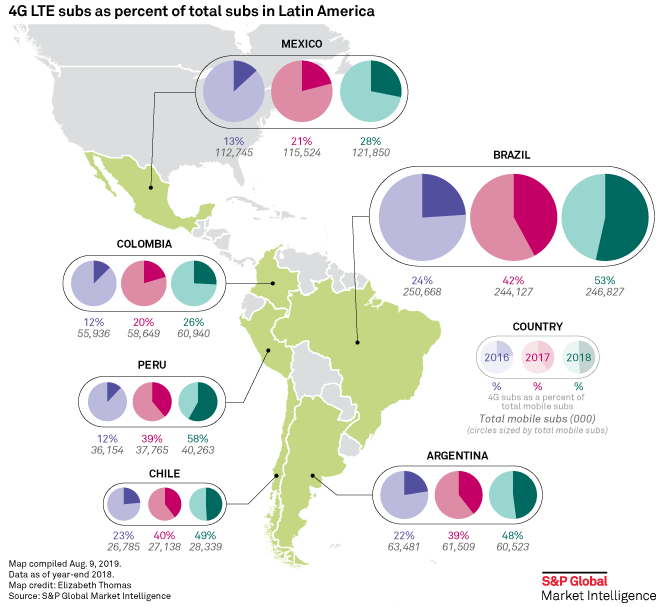 In the next two years, regulators across the six mobile markets we cover in Latin America are widening spectrum inventory in the low and mid-bands with the 700 MHz and the 3.5 GHz bands standing out. The cost associated with the millimeter-wave band does not make it an appealing option for Latin American operators that need a faster return on investment. Only Chile's telecoms regulator Subtel included the millimeter-wave band, or the 28 GHz band, as one of the four bands it would release for 5G. 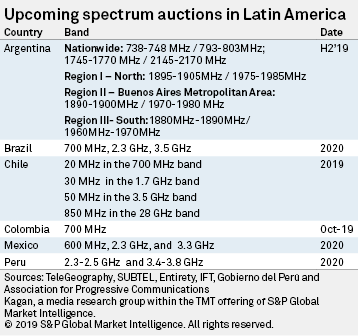 Despite a sickly peso and economy, a tight-fisted consumer base, and rising expenses in utilities, telecom operators still aggressively expanded across Argentina. The newly merged Telecom Personal SA and Nextel Communications Argentina S.R.L. entity increased its 4G LTE footprint in 900 new locations and ended 2018 with the most 4G LTE users under its network at 12.2 million subscriptions. While regulatory support for the millimeter-wave in Argentina is not a priority, Telecom Personal has started to conduct tests with Nokia Corp. within the 28 GHz band.

In Brazil, a little more than half of the subscriptions in the country are 4G LTE. Operators like TIM Brasil Serviços e Participações S.A.and Nextel Telecomunicações Ltda. used portions of their capital expenditures in 2018 to refarm mid-band spectrum they have under 1.7 GHz and 2.1 GHz. On the other hand, Claro Brazil, which is owned by America Movil, will comfortably sit as the second-largest operator in terms of subs due to its merger with NII Holdings' Nextel and will likely be asked by the country's regulator, Anatel, to return spectrum to level the playing field. Anatel is also lowering fees for operators to activate machine-to-machine, or M2M, connections that belied the successive growth of the sector.

The 4G uptake in Chile is predominantly smartphones with a little under 1% of total subs M2M. The quick adoption of 4G in Chile is partly due to the increased data bundles attached to cheap postpaid plans that are a transition for high-spend prepaid customers, as well as the advent of "unlimited" data and voice plans to capture heavy data users. Over half of total mobile subs in Chile are 4G as of year end 2018.

At the end of 2018, about 60% of total mobile broadband users in Colombia are 4G, which reflects the transition of 3G users and the increased demand for faster and more reliable networks. 4G LTE adoption is still very slow, but telecoms regulator MinTIC looks to change this through increased spectrum caps and the sale of the 700 MHz band. Meanwhile, operators are banking on traditional mobile services to sustain services and slow down the continuous ARPU by introducing unlimited text and voice add-ons in 2018.

For Mexico, mobile virtual network operators will likely be the first to dive in Red Compartida's network. The country's wholesale network ended March 2019 with 36% coverage of the whole country, which is why established mobile network operators have not yet inked any roaming deals with the network wholesaler. Instead, MNOs AT&T Mexico and Movsitar Mexico are repurposing spectrum under the 1.9 GHz band — shutting down 2G networks to enhance mobile broadband for 4G. With the highly anticipated 600 MHz band to be auctioned soon, it is unlikely that the 50,000 towers Mexico still needs will be built in the short term.

Peru is able to overcome the infrastructure gap through the wide distribution of the 700 MHz, 800 MHz and 900 MHz bands among Movistar; Claro Perú; Entel Perú S.A.; and Bitel, which is owned by Viettel Telecom Co. At the end of 2018, almost 60% of Peru's mobile subs were 4G LTE subs. Market regulations surrounding spectrum management, which required MNOs to expand networks to a number of locations after any spectrum auction, also helped the swift infrastructure build-out in the country. Around 63% of the active towers in Peru are owned by MNOs as of 2018, while towercos are trying to penetrate the market by offering these carriers a cheaper alternative. In 2018, operators fiercely competed in a price war in the prepaid segment while offering various data promotions through migration, online recharges, or by purchasing bundled voice and SMS packages.