Hampered by a lack of new discoveries and a shift away from growth-focused strategies toward margin preservation, the world's major gold miners have seen their economically minable gold reserves decline over the past 10 years. With top producers facing declining production profiles, shrinking reserves and rising production costs, we expect many to supplement their depleted pipelines by expanding organic exploration in the near term while leveraging targeted acquisitions.

Sixteen of the world's 20 largest gold miners — including top producers Newmont Corp., Barrick Gold Corp., AngloGold Ashanti Ltd. and Kinross Gold Corp. — saw their aggregate remaining years of production fall over the 2010-19 period. At the end of 2019, Kinross had just nine years remaining, down dramatically from 24 years at the start of the period. 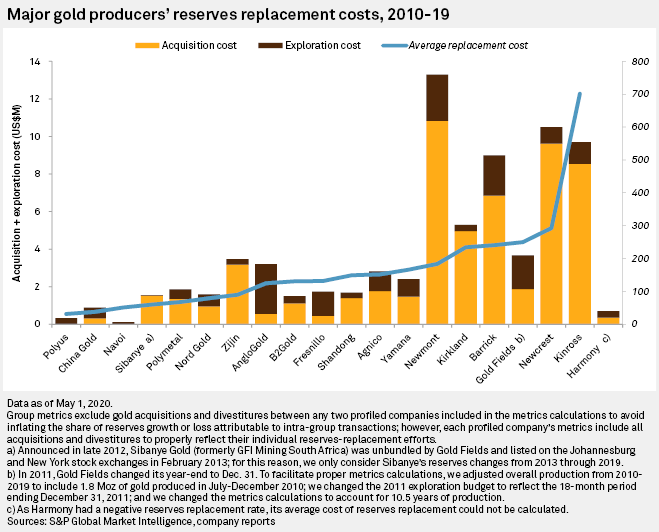 Only two companies — Zijin Mining Group Co. Ltd. and Fresnillo PLC — had more remaining years of production at the end of the 2010-19 period than at the start, and Gold Fields Ltd.'s remaining years were unchanged at 20. (We excluded Sibanye-Stillwater Ltd. from the chart above as the company was not created until 2013; during its seven years of operation, however, its remaining reserves life increased from 12 to 15 years.) Overall, the remaining years of production for the group, excluding Sibanye, fell by six years over the past decade, to 14 from 20.

Throughout the 10-year period, some miners relied mainly on acquisitions to replenish reserves or bolster production, although some of their largest deals are now viewed as overpriced, ill-timed or having not "panned out" as envisioned.

Major producers replaced gold reserves for US$175 per ounce

Over the 10-year period, the 20 top producers spent a total of US$69.55 billion on acquisitions and exploration, representing an average cost of US$175.15 per ounce for the 397 million ounces of replaced reserves.

Since 2010, 16 of the profiled gold producers have managed to increase their annual production, with Kirkland Lake Gold posting the largest increase. The Toronto-based company boosted output by more than 2,000%, from just 45,000 ounces in 2010 to almost 975,000 ounces in 2019.

In the full report, available to clients, we analyze each producer’s efforts, and the entire group’s production changes, reserves acquisitions and divestitures, exploration budgets and discoveries, providing comprehensive reserves-replacement metrics.