Service launches are showing momentum in Latin America and Eastern Europe, but remain in early stages in the Middle East and Africa.

The challenges to traditional multichannel services have rippled unevenly through the global pay TV market, but the integration of access to third-party streaming video or over-the-top services through proprietary set-top boxes has gained a broad foothold.

Operators across all six global regions have begun baking in access to subscription streaming services, with integration available from service providers that collectively had 342.3 million video subscribers, or less than one-third of the nearly 1.1 billion subs globally, according to Kagan estimates for major streaming service launches throughout the world.

Integrated access to streaming services has become common in Western Europe and North America. The practice is gaining a foothold in the massive Asia-Pacific market, and the service launches are showing momentum in Latin America and Eastern Europe ahead of the nascent stages in the Middle East and Africa. 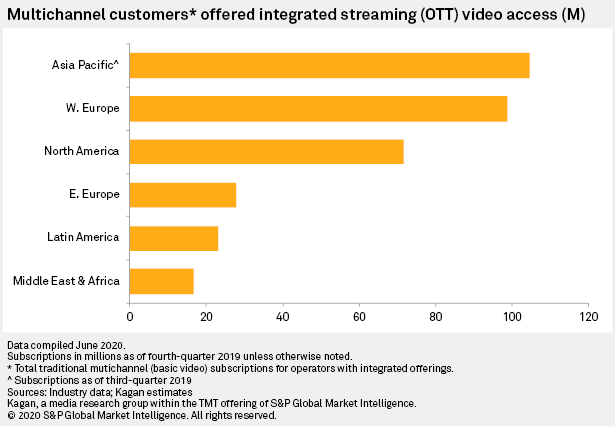 Kagan's study, spanning the first half of 2020, features slight differences in methodologies by region, rooted in varying approaches from the operators. One notable difference is the classification of premium offerings such as AT&T Inc.owned Home Box Office Inc.'s HBO Go, which is treated as a TV Everywhere offering in North America but appears as an integrated app in other regions.