Oct. 24 2018 — A firm’s stock price is often thought to be a reflection of its expected future cash flow. Based on this idea, in 1974 Merton proposed a model for assessing the structural credit risk of a company,1 leveraging Black-Scholes’ options pricing paper.2 This model has become popular among financial and academic practitioners and is still employed to monitor the credit risk of public companies or for investment purposes.

Due to its market-driven nature, the model’s daily outputs are often plagued by unwanted noise that makes it hard to detect genuine signs of a firm’s impending credit risk deterioration.

At S&P Global Market Intelligence, we have developed PD Model Market Signals (PDMS), a statistical model that builds on the original framework proposed by Merton with further enhancements and refinements such as:

How can you use PD Model Market Signals?

Based on this model, there are four early warning signs of imminent credit deterioration of the public companies under your surveillance. Below, we outline those key indicators and how to apply our PDMS model as a best practice approach for measuring credit deterioration.

1. The Probability of Default (PD) increases beyond a fixed level, based on our observed historical trends: Our model can be used to flag a company every time its PD passes the median or the bottom quartile of the distribution of defaulted companies. Figure 1, shows the historical behavior of the median and bottom quartile PD generated by PDMS for several hundred public non-financial companies that defaulted between 2003 and 2015, as they approached the default date. Half of the defaulters had a PD above 8%, a full twelve months prior to default, increasing to 15% at the default date. For a quarter of the companies that “went bust” (the “bottom quartile”), the PD goes from 16% (12 months prior to default) to more than 28% at the default date. Keeping in mind your own risk appetite, it is relatively straightforward to define reference points that can be used to generate timely alert signals that can trigger specific actions when breached in advance of a potential default.5

Figure 1: Median and bottom-quartile PD generated by PD Model Market Signals for non-financial (non-FI) public corporations that defaulted in the period 2003-2015, from twelve months prior to default to default date. 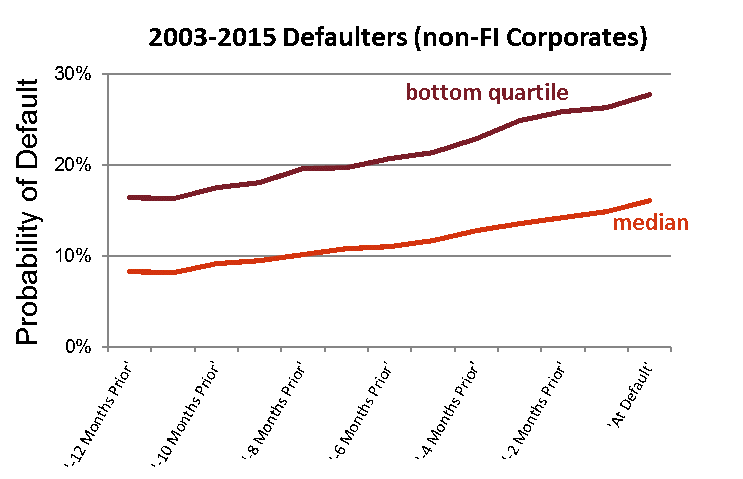 Source: S&P Global Market Intelligence (as of August, 1st 2018). For illustrative purposes only.
2. The PD is markedly different from the typical values of companies in the same industry/country peer group: When you have exposure to several companies in the same sector or country and their PD’s are all quite volatile, you still need to monitor and separate the “bad from the good apples”. Figure 2 shows the case of Noble Group Limited that defaulted in March 2018. Over a twenty-four month period prior to default, our PDMS model generated a very volatile PD that peaked above 30% on several occasions. This is even more significant when compared to the median, bottom quartile, and 10th percentile PD of companies in the same peer-group for the corresponding period. One suggestion to get additional insight is to set a threshold based on the bottom quartile or the 10th percentile PD so that whenever a firm’s PD exceeds the chosen threshold, the company is moved into a watch-list for further action. The converse would happen when the PD goes back within the “norm” range. This approach is also validated by the Key Developments reported for this company within the S&P Capital IQ platform, as shown in the callouts within Figure 2. 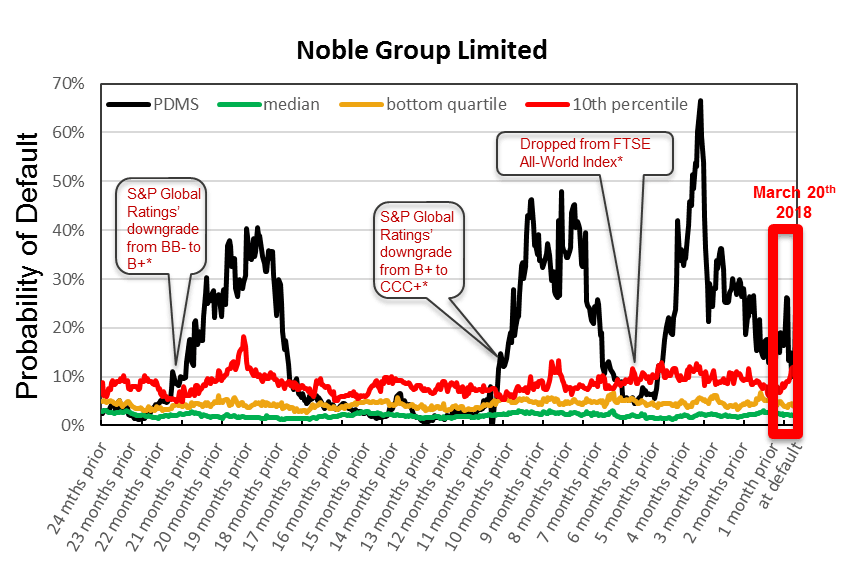 Source: S&P Capital IQ Platform (as of August, 1st 2018). For illustrative purposes only.
3. The PD of a company exceeds its moving average: This third sign is important when analyzing stock markets, where moving averages are often employed to remove unwanted noise to more easily gauge short-term and long-term trends of a stock’s price. A firm’s PD can often be very volatile, but its moving average (over 30 or 180 days) is less eventful, and any time the short-term moving average crosses the long-term average, a warning signal is generated. Cumulus Media Inc., which defaulted in November 2017, is a good example (see Figure 3). As you can see, a more timely alternative would consider the actual PD value in relation to the 30 days moving average. For example, in the Cumulus Media Inc. example, the last time the PDMS was higher than the 30 day moving average was in August 2017.This additional intelligence would have potentially allowed for precious time to carry out further analysis or take an appropriate remediation action. In addition, in this case, checking key developments and news may have further provided signal confirmation, as shown in Figure 3. 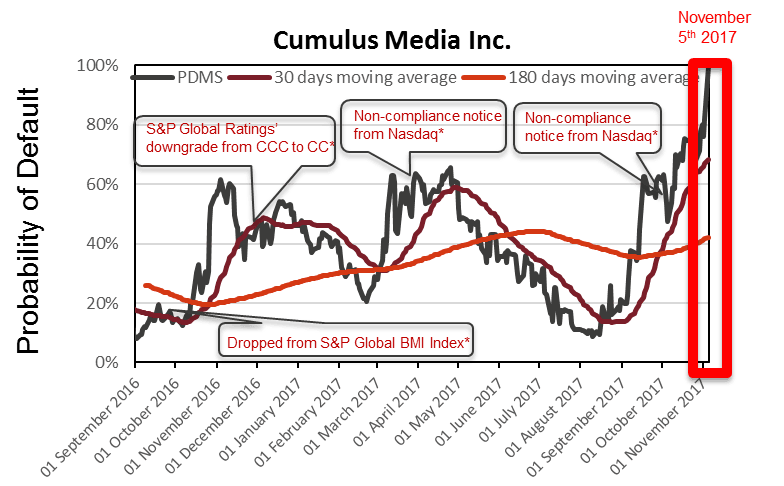 More generally, our internal analysis on non-FI corporates rated in the speculative grade range by S&P Global Ratings shows that whenever the PDMS-implied score is three or more notches worse than the actual credit rating, there is a 30% chance of a further S&P Global Ratings’ downgrade6 within 12 months. This helps confirm the versatility of this technique in generating actionable signals even for asset management purposes. We will follow with a separate white paper on how asset managers can use this model, and what happens when the PDMS implied-score sizably deviates from the S&P Global Ratings’ issuer credit rating.

What about the public companies that are not rated? One can still combine the PDMS output with the credit score generated by S&P Global Market Intelligence’s CreditModelTM, a quantitative model that uses company financials and other socio-economic factors to generate a quantitative credit score for a longer time horizon that statistically matches S&P Global Ratings’ issuer credit ratings7 for rated companies, but also covers unrated companies. 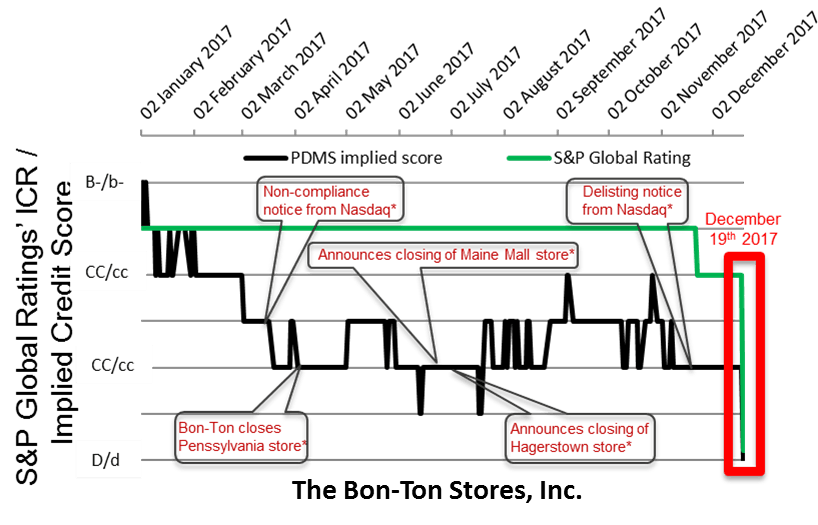 Some will argue that looking at a firm’s stock price should be sufficient for most purposes, as its price already embodies all necessary market information. However, the main advantage of a structural model such as PDMS is to link the capital structure of a company to the uncertainty around a company’s future cash-flows, and to properly quantify the probability of default based on empirical evidence.

As a final remark, we stress that none of the techniques mentioned above will be infallible all the time, due to the unpredictable nature of default events. In general, a combination of multiple signals will achieve better performance, and should trigger further due diligence. For example looking at the company financials and their trend over time, comparing the focus company vs its peers, complementing the market-implied credit risk assessment with alternative statistical models (for example S&P Global Market Intelligence’s PD Model Fundamentals), and ultimately validating the assessment with news, key developments or alternative information.

5 Past performance does not predict future results. As such, statistical models are calibrated on companies that have and have not defaulted