Verizon has been the fastest-growing network over the past two years by fiber route miles, adding nearly 200,000 to end 2018 with more than 1 million globally.

Mar. 04 2019 — Optical fiber, long the backbone for broadband internet, will soon take on additional workload in the form of data backhaul for 5G wireless traffic. That has spurred the two fiber titans among U.S.-based companies to build out even further.

Our analysis of fiber networks held by U.S.-based companies found telcos in control of the three largest fiber networks. AT&T Inc. and Verizon Communications Inc. alone combine for more than 2.2 million route miles, more than half of the total in our survey of publicly available data.

Verizon is jockeying with AT&T to lead the 5G charge in the U.S. 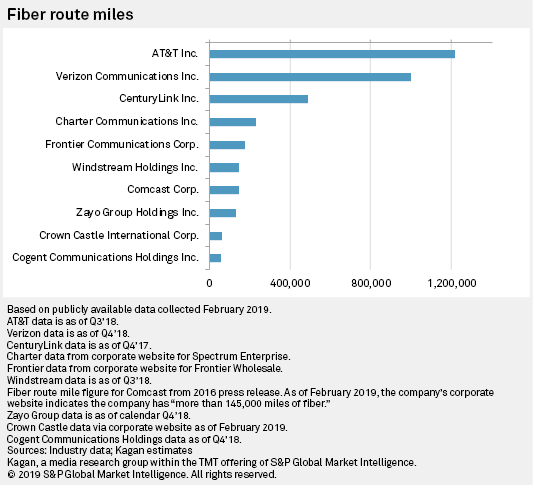 Third on our list is CenturyLink Inc., which nearly doubled its fiber route miles in 2017 with the acquisition of Level 3 as it sharpened its focus on large-scale business functions.

Broadband and multichannel providers Charter Communications Inc., Frontier Communications Corp., Windstream Communications, Inc. and Comcast Corp., take up spots four through seven on our list. Their publicly available data on fiber route miles has been relatively static in recent years, perhaps because they are not under pressure to deliver next-generation wireless networks.

Our analysis is based on recent company filings or data found on corporate websites and is, consequently, an incomplete picture.