To date, all of the ESG-linked financings completed in the European leveraged loan space have been private equity-backed

Private equity firms' focus on ESG topics, the inclusion of ESG-linked ratchets on sponsored loan transactions is perhaps a natural progression for the market to adopt

Europe's sponsored activity opened the year with a surge of new leveraged finance issuance in January, as private equity-backed borrowers hit the high-yield bond and leveraged loan markets for both new-money transactions and opportunistic deals. 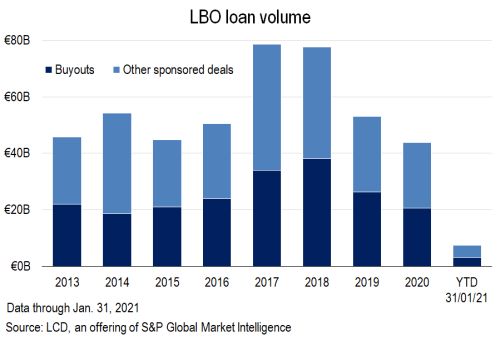 In January there was €7.48 billion of European sponsored loan issuance, according to LCD, which is equivalent to nearly 20% of the total private equity-backed volume recorded in the whole of 2020. Of January's loan activity, roughly €3.12 billion was used to support buyouts, with the €965 million term loan supporting Carlyle's €2 billion carve-out of Flender GmbH from Siemens, one of the largest LBOs of the month.

As had been the case in 2020, January also saw a number of sponsors turn to the increasingly competitive high-yield market to fund their buyouts. European jewelry retailer THOM Europe SAS, for example, wrapped a €620 million offering of fixed- and floating-rate notes to back its buyout by Altamir, while BC Partners-backed Forno d'Asolo S.p.A completed a €350 million offering of secured notes (albeit as a private placement and not a widely syndicated deal), with proceeds expected to be used to back a portion of the sponsor's acquisition of Pasticceria Bindi. 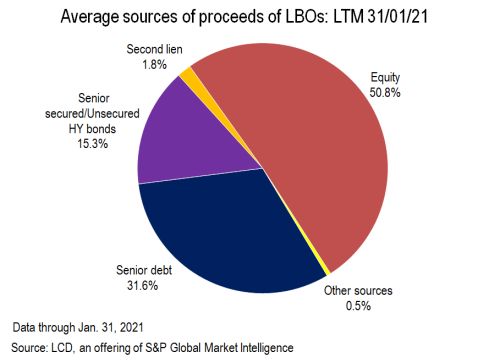 January was a relatively quiet month for new buyouts announced in Europe, with CVC taking over heavy building materials distributor Stark Group at the beginning of the month, and Nordic Capital announcing its take-private of Advanz Pharma on Jan. 27. More such supply is expected to be on the way though — especially given that the amount of cash available to private equity sponsors to put to work continues to rise. 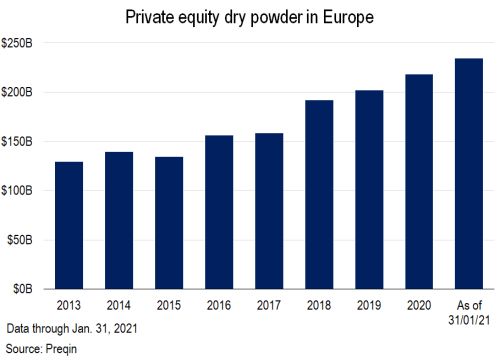 Pricing dynamic
Away from buyouts, private-equity-backed issuers were also busy in January taking advantage of the tightening pricing on offer, with a string of opportunistic transactions. Generics pharmaceutical firm Zentiva Group a.s., which is backed by Advent, shaved 25 basis points from the margin of a €1.275 billion term loan, while Hellman & Friedman-owned Verisure AS repriced its €800 million B1-F term loan, cutting the margin by 50 bps to E+350, alongside a €4.4 billion bond and loan debt package to fund a dividend and refinance debt. Elsewhere, BC Partners-backed Springer Nature repriced its cross-border term loans of €2.154 billion and $868 million, while extending the tenor of the debt.

In January, total loan repricing activity in Europe increased to €1.3 billion, from €1 billion in December — the first two months to register any such volume since February 2020, apart from October (which saw €150 million of repricing activity). Throughout the month, supply in the leveraged finance markets was dwarfed by investor demand for paper, driving the terms on offer tighter and creating the backdrop that allowed for these repricings and extensions. In the secondary market, this pricing dynamic was reflected in the performance of the S&P European Leveraged Loan Index with the weighted average bid of the Index rising in January, and nearly reaching its 2020 pre-lockdown high by Feb. 18, at 98.61. 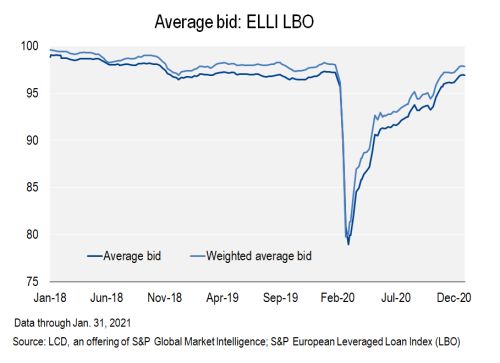 Looking at January's loans that were backed by private equity sponsors, several carried pricing features linked to environmental, social and governance criteria as sustainable borrowing looks like becoming a mainstream practice for many private equity firms. A €1.755 billion term loan B from French private healthcare Groupe ELSAN SAS, for example, included a +/- 15 bps margin ratchet linked to ESG criteria (with the ratchet increased from original talk of +/-7.5 bps), while the €965 million facility backing Carlyle's carve-out of drive technology firm Flender included a margin ratchet of 5-10 bps linked to the power volume of new gearbox installations in wind turbines.

Elsewhere, the €1.2 billion-equivalent term loan portion of the bond and loan refinancing from SVP-backed Klöckner Pentaplast GmbH includes an ESG-linked margin ratchet based on three KPIs focused on emissions, packaging, and women in management, with each target having an independent ratchet of +/-2.5 bps tested annually.

To date, all of the ESG-linked financings completed in the European leveraged loan space have been private equity-backed, and sponsors are clearly leading the way in making ESG a mainstream concept in the market.

Private equity firms' enthusiasm for ESG has been evolving over the past decade, but the issues tackled by the topic have come into particular focus in the last year. "There has been a shift in the last 12 months," confirms Vanessa Maydon, corporate affairs director at Cinven. "This is partly due to an increasing focus on issues like climate change, while the pandemic and movements like Black Lives Matter have shifted more attention to societal issues including diversity and health."

Furthermore, it is not only private equity firms themselves putting ESG issues in the spotlight, as the topic is becoming increasingly important to their own investors, including limited partners. "Our LPs are clearly more focused on this issue and are putting more pressure on private equity," continues Maydon. "A lot of money that comes into the sector is public pension fund money — and they want to know that their investments are going somewhere responsible."

James Yu, a partner at EQT Partners, agrees that the growing attention on ESG not only comes via feedback from LPs, but also from institutional debt investors and from the need to tie in with sponsors' own internal guidelines on ethical and sustainable operations. "We want to know that everything we do is contributing to a sustainable world and a more equal world," says Yu. "ESG has become a big theme for fundraisings and a mainstream topic of the due diligence process for our LPs, but it's often also the biggest question from debt investors on deals."

Indeed, EQT is now one of the firms that considers ESG at every stage of its process in acquiring, managing, financing and exiting portfolio companies. It ensures that every one of its portfolio companies has a board representative focusing on ESG matters, that all its firms are moving towards gender parity on its boards, and that all are increasing their use of renewable energy. However, this is not purely for altruistic purposes as an asset that has engaged with ESG is likely to be more attractive to future buyers and debt investors. "You need to have a business that is contributing," says Yu. "When we're looking at new businesses to invest in, before we even talk about returns if ESG is not an integral part of the investment story then we won't buy it — and that's across all strategies. If you're not investing with ESG trends, those portfolio companies, in five years' time, may not be as sellable. And it may be that deals without an ESG angle don't get financing in the future. Debt investors want to see that firms are a positive contributor to the world."

Others agree that implementing an ESG strategy can have a material upside for private equity firms. "It can be quite difficult to measure the impact of ESG, but some studies have cited companies that are more focused on these issues are more profitable," says Cinven's Maydon. "Private equity is profit-driven, we're focused on generating returns and we're always asking what is the upside? Where is the value uplift in a business? There's now more evidence that this is the right approach."

Ratchets at the ready

Against this backdrop of private equity firms' focus on ESG topics, the inclusion of ESG-linked ratchets on sponsored loan transactions is perhaps a natural progression for the market to adopt. While some bankers expect the ESG-linked margin ratchet to become as widespread as cov-lite structures, the market is still very much in the early stages of implementation, and there is no standardized format for the way that sustainability ratchets can be utilized. One market participant has called this area the "wild west" of the leveraged finance markets, and some investors remain cynical that an ESG-linked margin ratchet is just a way for a sponsor to reduce the costs of a transaction.

The sponsor behind the Flender transaction notes that it is working to bely this expectation. The borrower will donate half the savings from the ratchet to ESG charities, ensuring that the private equity firm would not be seen to be reaping all the monetary benefits of the company under the chosen KPI for ESG.

"There's definitely buy-in from European banks on this issue, but our focus was on how the ESG criteria would translate to the CLO market where funds are assessed on returns," says Chris Scott, managing director and head of European capital markets within the global capital markets team at Carlyle (note, the CLO market is the predominant investor segment in European leveraged loans). "On the Flender transaction — one of the first big TLBs with an ESG ratchet — we were delighted with the market response, with investors identifying ESG criteria as important for their funds. The ratchet flexes up to 10 bps dependent on how much growth there is in the installation of gear boxes for wind power. It is an important feature the ratchet works both ways. If targets are met the company will benefit from the interest saving, and plan to pass a proportion of this on to environmental charities — this is likely a first in the leveraged loan space. But there is also a penalty construct if targets are not met."

Alongside the €600 million term loan from Klöckner Pentaplast, the accompanying $725 million U.S. facility also included the same ESG KPI language — making it what is understood to be the first term loan to incorporate an ESG-linked ratchet on a transaction marketed to U.S. investors. Indeed, the U.S. market has fallen behind Europe in the adoption of ESG-linked lending — partly due to the recent political landscape there placing less of a focus on sustainability in general, but also because of the structural differences between the regions' leveraged lending markets.

"The U.S. is a sophisticated market, but if you do a cov-lite term loan there it looks like every other term loan," says one senior market participant. "In Europe there's a bit more flexibility and creativity."

Private equity sponsors say the theme is likely to spread from Europe, especially given many of the investors participating in recent deals are from global firms, and suggest that now such players have got comfortable with ESG-linked structures in the European market, they will be able to transfer that familiarity to transactions coming from further afield.

LCD Monthly: Demand for US loans puts borrowers in the driver's seat