We believe that The Walt Disney Co.'s 10-year exclusive agreement with the Southeastern Conference, announced on Dec. 10, is just the first in a number of long-term sports rights deals that will fuel both ESPN Inc. and its streaming offshoot ESPN+.

Although ESPN (US) has been bleeding subs due to cord cutting and cord shaving, ESPN + is on a growth trajectory. We believe that it will continue to line up digital rights that will enable it to, over time, shift a number of games — and the costs with them — over to ESPN+.

At Walt Disney's investor day, held online on Dec. 10, very little was said about the linear networks and the focus was clearly on Disney+, Hulu and ESPN+. Management used the venue to announce the SEC deal, and the stock soared by 13.59%, or a gain of more than $21, to a new all-time high of $175.72 on Dec. 11. 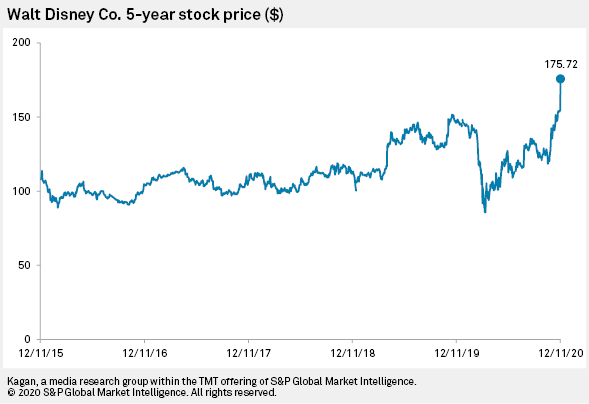 This came despite the woes at virtually every division caused by the coronavirus and was due in large part to Disney significantly raising its guidance on its over-the-top services, which was given at last year's investor day. Disney is now expecting a massive combined sub count at Disney+, ESPN + and Hulu LLC's Hulu of 300 million to 350 million in fiscal year 2024, versus just 108 million to 162 million per the company announcement at last year's investor day. 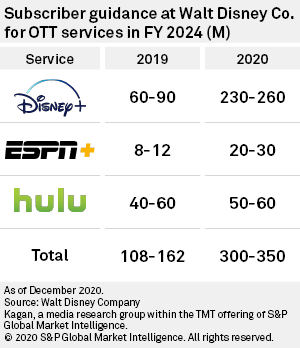 As the graphic below shows, ESPN+, which currently has 11.5 million subs — nearly triple what it had a year ago — is dwarfed in size by ESPN. However, by 2024, at the high-end of Disney's most recent guidance, ESPN+ could have 30 million subscribers, making it half the size of the mothership ESPN. 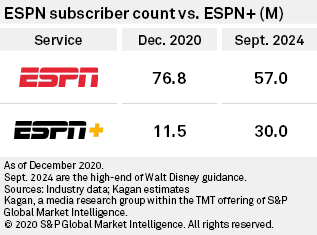 At that point, we believe that significantly more top-tier games will air on ESPN+, with Walt Disney negotiating deals where it can put games on ESPN, ESPN+, or both. Management admitted that some of the costs of the SEC deal will be amortized at ESPN+, although it is premature to say how much. It did note that ESPN+ is expected to be profitable by fiscal year 2023, right before the new SEC pact kicks in.

Other good news announced at investor day for ESPN+ is that it will be integrated into Hulu so subscribers will not have to leave the app to watch ESPN+ content. Hulu has 92 million monthly ad-supported viewers, double what it had a year ago, a significant springboard for ESPN+.

Another positive for both ESPN and ESPN+ is that Hulu + Live TV — which includes both ESPN and ESPN+ as well as Disney+ in its $61.99 bundle — hit 4 million paying subscribers. With the popular Disney+ platform now included and its commitment to significantly ramp up content spend, the company has the confidence to raise the price point by $10/month on Dec. 18.

Clearly, the most recent SEC deal shows Walt Disney's confidence in paying up big for important sports rights in order to fuel its ESPN and ESPN+ platforms. Although the new deal does not start until 2024, getting the top-tier conference's premium football and men's basketball broadcast rights is a big win. The deal is reportedly worth $3.00 billion in total, or about 6x the value of the current CBS (US) annual payout, which has been pegged at just $55 million per year.

The new pact means that Disney will soon hold the broadcast rights to every SEC football and men's basketball game, which Disney will deploy via ABC (US), ESPN's linear networks and ESPN+.

The recently announced transaction includes up to 15 football games, including the SEC Championship game, as well as high-profile inter-conference rivalry games such as the Iron Bowl (Alabama vs. Auburn) and Georgia vs. Florida.

Then there's the SEC Network (US), which is owned and operated by ESPN, and launched in 2014 as the conference's third-tier rights holder.

Disney's strategy, vision and structure show that it is confident where the future of sports media is heading, and the company is now looking to maintain and expand its premium sports rights portfolio to arm its multiple platforms. The company has stated that it believes the future of sports media will be built on consumer demand for big brands, and it is tough to find a bigger brand in college football than the SEC.

The news that CBS was not going to renew its SEC package broke about a year ago by SBJ's John Ourand, where Ourand correctly projected ABC/ESPN as a likely landing spot.