Affiliation with technology platforms serving large pools of consumers and small businesses could be key to the future of both freshly minted digital banks and incumbent banks with digital capabilities. For branchless banks in the region, partnership with e-commerce companies could be the quickest way to gain scale as e-commerce sales in the six largest economies are estimated to grow to $79.29 billion in 2022 from $41.28 billion in 2019, according to 451 Research, which is part of S&P Global Market Intelligence.

Shopee and Lazada are engaging shoppers and merchants through digital payments and lending to shore up activity on their marketplaces across these countries. 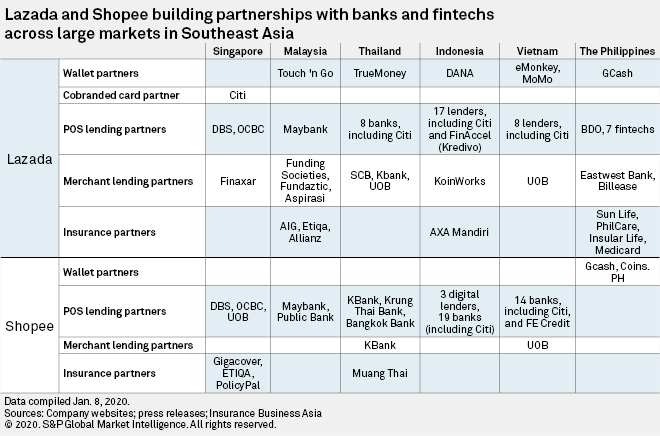 Affiliates of the two e-commerce companies have applied for bank licenses in Singapore and will likely be interested in other Southeast Asian countries. We expect Lazada, Shopee and banks tethered to their platforms to become principal actors in the evolution of digital banking in the region.

Full digital bank licenses come with strings attached, including maintaining minimum capital of S$1.5 billion. The Monetary Authority of Singapore will also look at candidates' ability to offer financial services to underbanked segments in the city-state and to use Singapore as a gateway to expand into other Southeast Asian countries. Of the six known bids for full bank licenses, applications made by Sea and ride-hailing company Grab Holdings Inc.'s consortium appear to most comfortably meet these expectations. 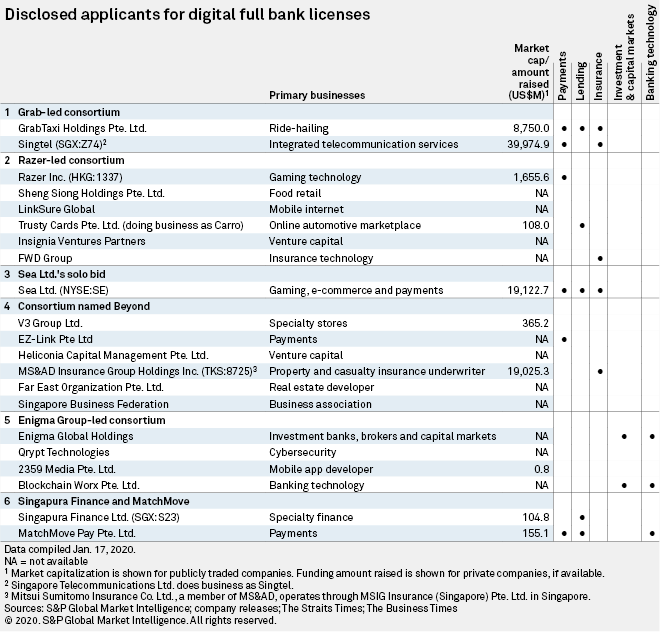 If successful, both Sea and the Grab-led consortium could use their banking licenses to serve their current ecosystems. Sea’s e-commerce business, however, presents the company with greater lending opportunities, as online shopping transaction values tend to be bigger than ride fares.

With a digital bank license, Sea could bridge the gap with large competitors in Singapore in terms of providing financial services to its users. It does not offer co-branded cards, whereas Lazada and Singapore-based e-commerce company Qoo10 already partner with Citigroup Inc. and Bank of China Ltd., respectively, to offer co-branded credit cards.

Other notable e-commerce platforms in Singapore

Whether or not Lazada has applied for its own digital bank license in Singapore, it can lean on Ant Financial Services Group to support its merchants if the Alibaba affiliate is successful with its application for a wholesale license to collect deposits from and make loans to small businesses.

Another notable e-commerce company that has not signaled interest in a bank license is Qoo10, which has generally shown greater alacrity in using financial services and technology in facilitating payments than most large e-commerce companies in Singapore.

Qoo10 in 2019 launched a blockchain-based online marketplace that uses smart contract technology to settle payments between sellers and buyers. Shoppers and merchants on the QuuBe marketplace deal in a digital currency known as Q*Coin, obviating the need for middlemen in cross-border transactions. Its flagship e-commerce platform allows shoppers to use third-party wallets, such as GrabPay and DBS’ Paylah, and offers loans to sellers in partnership with United Overseas Bank.

Qoo10 does not enjoy the large capital buffers of Lazada and Shopee, which have deep-pocketed affiliates. Even if it is not in the race for a bank license, it should be on the radar of banks seeking partnerships with digital platforms.

Both Shopee and Lazada will have greater banking needs in other large Southeast Asian markets, where cash-based payment options appear to be more popular than in Singapore. Both marketplaces offer cash-on-delivery options in Thailand, Indonesia, Vietnam and the Philippines, which lead to longer cash conversion cycles and pose risks to merchants.

Installment payment options are available to credit card holders across Singapore, Malaysia, Indonesia, Thailand, Vietnam and the Philippines. And both Lazada and Shopee already make unsecured lending available at the time of checkout to buyers without credit cards in Indonesia in partnership with peer-to-peer lending firms.

Offering banking services, including credit cards and other unsecured lending options, to consumers in underbanked countries allows e-commerce companies to shift consumers away from cash-based payments and drive greater activity on their platforms. While Lazada could deepen its fintech ties with Ant Financial-backed companies, Sea could see a greater need to secure bank licenses in other countries.

Are you a current client?