The key eight telcos experienced a revenue fall in the first quarter of 2020. TIM in Italy saw the steepest revenue decline, off by 12.4% in local currency and 13.9% in U.S. dollars.

Reported ARPUs in the first quarter of 2020 declined in Austria, Finland, France, Italy and Sweden

Deutsche Telekom AG, British Telecom, Orange SA, KPN NV, Telefónica SA, Telecom Italia SpA, Proximus, Telia Company AB (publ), Swisscom AG, Telenor Norge AS and Telekom Austria Group (A1 Telekom) saw revenue declines in a range of 1.4% to 12.4% in the first quarter of 2020 as a result of cancellations and postponements of sporting events, as well as adverse economic effects caused by the COVID-19 pandemic. In general, the operators downgraded their expectations for 2020 in terms of revenue and average revenues per user, and in some cases, decreased their future dividends. Share prices for all the incumbents in Western Europe took a moderate to steep tumble around mid-March 2020 and recovered fairly strongly after that — but not to the pre-March level.

The key eight telcos experienced a revenue fall in the first quarter of 2020. TIM in Italy saw the steepest revenue decline, off by 12.4% in local currency and 13.9% in U.S. dollars. Its capex fell by 65.9% in euros. However, for the last four years, TIM has reported lower first-quarter capex compared to the previous quarter. Kagan is not expecting capex to be affected for the year and for the next five years as the fiber build-outs continue. In the long term, the more efficient fiber network will cut operating costs for incumbent telcos. A1 and Deutsche Telekom reported higher capex in the first quarter of 2020 than in the previous quarter. Telenor's revenue declined by 6.7% in local currency, a 17.2% fall when expressed in U.S. dollars; the Norwegian kroner fell sharply against the U.S. currency over the period.

Reported ARPUs in the first quarter of 2020 declined in Austria, Finland, France, Italy and Sweden 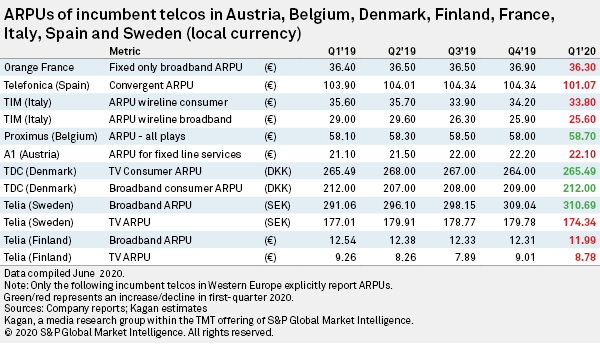 When expressed in U.S. dollars, the reported ARPUs in Austria, Belgium, Denmark, Finland, France, Italy and Sweden were as follows: 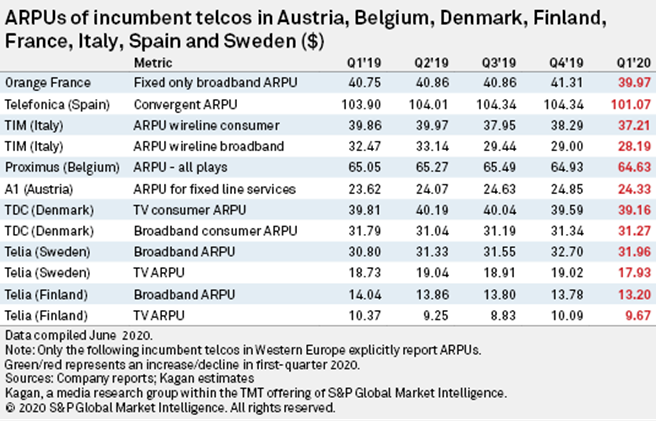 Telia saw TV ARPU declines, with its TV & Media unit negatively affected by COVID-19. In its Sweden and Finland markets, its TV ARPUs went up in the last quarter of 2019 after declining in the previous quarter. Some fans' decisions to pause sports package subscriptions also impacted ARPUs during the global pandemic. However, unsubscribing from a package out of contract led to cancellation fees, so only subscribers who had a sports package for over 12 months were able to cancel it. This explains why ARPU only declined by 3.0% in Sweden and 2.6% in Finland in the first quarter of 2020.

Orange in France, TIM in Italy and Telia in Finland experienced a fall in fixed broadband ARPUs due to downgrades of triple-play and quad-play bundles to cheaper alternatives. As with the TV subscriptions mentioned above, only certain customers were able to change their contracts. ARPUs fell by 1.6% and 2.6% for Orange and Telia, respectively. Such low declines are a testament to a broadband connection's essential role, both for work and entertainment, during lockdown. ''It is not a deluge, but it is a very large increase," said Johan Ottosson, the head of international business at Telia, in a March 2020 Financial Times interview. TIM's wireline broadband ARPU declined by 1.2% in the first quarter, despite an 80.0% increase in fixed data traffic volumes. Telefonica's "convergent ARPU" in Spain declined sequentially by 3.1% from €104.34 to €101.07. The decline was moderate because a large proportion of customers subscribed to multiplay bundles. In the first week of lockdown, fixed broadband data traffic grew by 20.0% and both fixed and mobile voice usage increased by 70.0%.

For more information on the U.K.'s fixed broadband market, please refer to this article and to the Broadband Market Summary of Kagan's U.K. country profile.

As of June 2020, the majority of incumbent telecom companies planned to pay out dividends in line with previous years. Orange France and Telia, the incumbent telco in Sweden and Finland, told shareholders that dividends will be reduced by 28.6% and 26.5%, respectively. France, which enforced one of the strictest lockdowns in Europe, has a history of showing support for essential industries, including telecommunications. With Orange France 23.0% owned by the French government, the latter was able to pressure the company to reduce the dividend. This is in line with the French government's commitment to stop companies that received state aid and tax holidays from paying out shareholder dividends.

Telia reported that COVID-19 negatively affected its TV & Media unit and that it will miss its operational cash flow and EBITDA 2020 goal. Telia has an even higher government share ownership than Orange France: the Swedish state holds 38.4%. As in France, Sweden offered a variety of financial support and tax deferments to local companies during the pandemic. Although Sweden was the only country in Europe not to enforce a lockdown, its telecom companies were hit by declines in mobile roaming revenues and losses associated with travel restrictions and the postponement of live events. 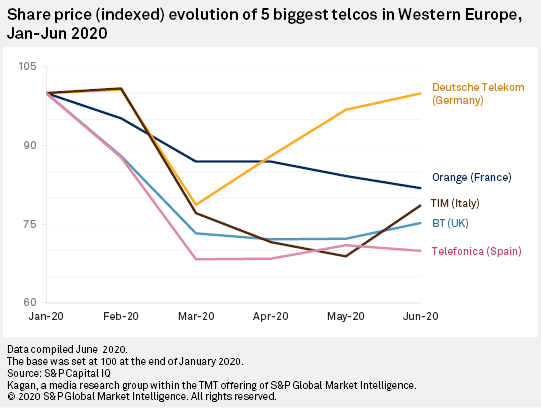 Deutsche Telekom's share price recovered almost to the January 2020 level at the end of June 2020. BT's share price recovered the least since the European pandemic's peak. This was partly due to the dividend payment suspension described above. Orange France's share price continued to fall past France's lockdown. The lockdown was first introduced on March 17 and was lifted on June 15 when France opened its borders to the U.K., the European Union and the rest of the countries in the Schengen Area.

Despite a share price recovery to pre-pandemic levels, Deutsche Telekom's credit rating was downgraded by S&P Global Ratings in April 2020 from BBB+ to BBB. It was the only downgrade among the five largest telcos' credit ratings. The decision was primarily driven by the completion of the merger between Deutsche Telekom's T-Mobile U.S. and Sprint. Ratings stated that despite the long-term benefits of the merger, increased risk and uncertainty in the short and medium term warranted the downgrade; the outlook was stable.