Amazon added 6,000 MW of new wind and solar capacity over the year for a cumulative total of 8,500 MW of renewable capacity, including on-site renewable generation.

Corporate wind PPAs made up roughly 82% of the total corporate renewable capacity installed through 2019.

There is an estimated 41,000 MW of corporate-tied renewable capacity in the U.S.

The COVID-19 pandemic proved to be a significant disruption for many corners of the global energy industry, but the corporate renewables market plowed ahead as if nothing had happened. S&P Global Market Intelligence tracked over 20,000 MW of new corporate wind and solar capacity throughout the year, making 2020 the most active year yet in the rapidly growing segment.

Leading the charge were technology and telecommunications companies, which saw their demand increase due to distancing and stay-at-home mandates worldwide. Internet retail and web services provider Amazon.com Inc. became the leader in corporate renewable capacity in 2020 after signing agreements for nearly two dozen new wind and solar projects around the globe. Amazon added 6,000 MW of new wind and solar capacity over the year for a cumulative total of 8,500 MW of renewable capacity, including on-site renewable generation.

Amazon signed deals with wind and solar projects in 14 countries including the U.S., the U.K., Spain, Australia, Sweden, Canada, South Africa and China. In the U.S., Amazon added over 1,350 MW of solar capacity in Ohio alone, including a 300-MW power purchase agreement, or PPA, with the Highland Solar Farm developed by Hecate Energy and a 200-MW deal with the Hillcrest Solar Project from Innergex Renewable Energy Inc. The Seattle-based company added to its substantial portfolio in Virginia with over 300 MW of new solar capacity to service its data centers in the region. 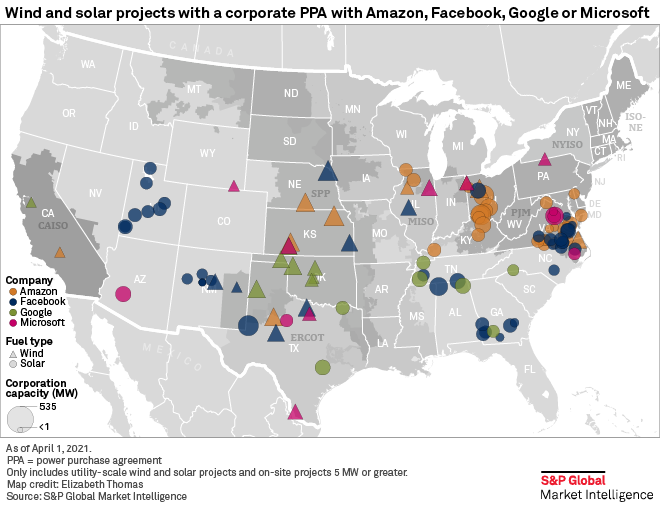 Alphabet Inc. subsidiary Google LLC slipped to second place in 2020 in the corporate renewables market behind Amazon but remains a leader in the industry. The technology company signed deals for nearly 1,000 MW of new renewable capacity, pushing its cumulative total to around 6,200 MW. Google was one of five companies that signed a PPA with the massive 1,310-MW Samson Solar Energy Project in Texas developed by Invenergy LLC. Google signed 100 MW from this project along with 140 MW from the 7v Solar Ranch Project, also in Texas. The largest deal from Google was an agreement with Berkshire Hathaway subsidiary NV Energy Inc. for 350 MW of solar capacity and up to 280 MW of energy storage.

Microsoft Corp. has nearly 2,700 MW of corporate renewable capacity in PPAs in the U.S., the Netherlands, Singapore and Ireland. Its largest PPA signings to date include the 225-MW Pleinmont Solar II (Spotsylvania Solar Energy Center) project in Virginia, the 178-MW Bloom Wind Power Project in Kansas and the 175-MW Pilot Hill Wind Project (K4 Wind Farm) in Illinois. In 2020, Microsoft announced a portfolio addition of 500 MW of solar capacity across the U.S. with developer Sol Systems.

Other active companies in 2020 include Verizon Communications Inc., which announced nearly 1,700 MW worth of deals for wind and solar projects in Indiana, West Virginia and Texas. The telecommunications company announced agreements for 296 MW of solar with First Solar and 254 MW of solar in Texas with Clearway Energy Inc. Rival AT&T Inc. announced one of the largest single PPA signings of the year in the U.S., agreeing to buy 500 MW from the Samson Solar Project. Automobile manufacturer General Motors Co., fast food corporation McDonald's Corp. and steel manufacturer Nucor Corp. also signed notable deals in 2020, adding 680 MW, 583 MW and 517 MW of renewable capacity, respectively. 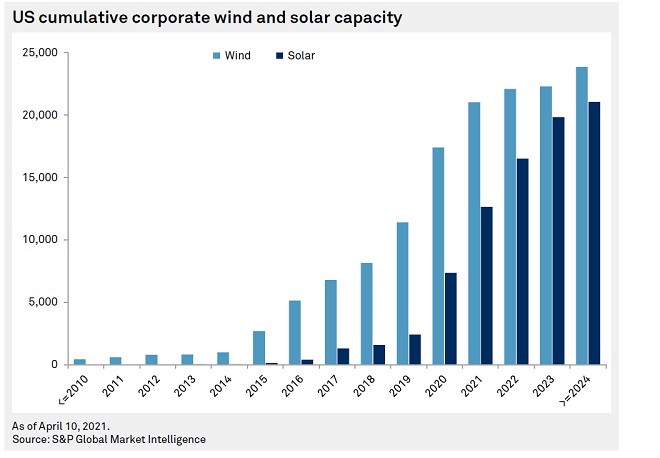 The rapid development of solar in Texas is helping this trend. Additionally, data centers, which have been a key driver for corporate renewable procurement, are located in several markets where solar is the preferred technology. These markets include Virginia — one of the data center hubs in the world — Utah, New Mexico and the southeast region, which includes Georgia, Alabama and Tennessee. Solar makes up nearly two-thirds of the corporate PPA capacity announced in 2020.

Given the rapidly growing storage market in the U.S., it is likely to become a larger part of the corporate renewables market as well. The battery storage pipeline in the country has increased to 12,300 MW of storage tied to wind or solar projects, with an additional 9,700 MW of stand-alone storage.

The pace of corporate renewable deals did not skip a beat in the midst of a pandemic and is expected to continue to expand its footprint in the U.S. and globally. The interest in going 100% renewable goes well beyond the tech industry and is reaching all corners of the corporate world. Members of the RE100, an organization of companies committed to going 100% renewable, nearly doubled to over 300 members worldwide from fewer than 200 in 2019. This increasing commitment will help the corporate sector.