It has been nearly a decade since OnLive launched the first cloud gaming platform to the public in 2010, but the segment has yet to draw a significant audience. Now, with Alphabet Inc. and Microsoft Corp. primed to bring their considerable technical and marketing muscle into the fray, Kagan expects cloud gaming to command $3.61 billion in revenue by 2023. 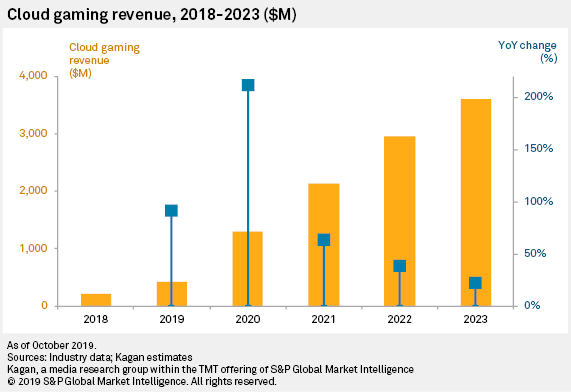 We believe that the opportunity to play console-quality games on hardware people already own combined with the branding prowess of Sony Corp., Microsoft and Google will be enough to push cloud gaming's worldwide monthly active user and subscriber count from 1.5 million in 2018 to 25.9 million in 2023.

Kagan's definition of cloud gaming takes into account only those cloud services that stream game content remotely. Some services, such as Xbox Game Pass and Apple Inc.'s Apple Arcade, leverage the cloud to offer users games to download, but we see these as an extension of the digital games marketplace and not true cloud gaming.

Cloud gaming's potential is reminiscent of the internet video-on-demand phenomenon that disrupted the home entertainment market, but internet infrastructure constraints and the gravitational pull of the traditional console market will likely keep upside in check over the forecast period.