The recent COVID-19 pandemic has reminded governments about the importance of managing tail risks, which are a form of portfolio risk, including green swans related to climate change, which occur outside the normal range of expected events. While pandemics may give a hand to the climate risk agenda by triggering nationwide lockdowns that help reduce greenhouse gas (GHG) emissions, paradoxically, there is mounting scientific evidence that global warming may facilitate the spread of a variety of bacteria, viruses, and vibrios, thus exposing the world’s population to severe epidemics or new pandemics.[1] This adds to the list of well-known physical risks associated with global warming, such as droughts and wildfires, and confirms why tackling climate change is important. However, there are still roadblocks on the way to a greener future. A transition to a low-carbon economy will require concerted efforts among governments, companies, and households, plus significant investments into greener technology over the next 30 years.

A carbon tax is one of the main policy tools leveraged by governments to accelerate this process. The way companies respond to it, by promptly adopting new technology and reducing CO2 emissions, lagging behind, or carrying on their business as usual (BAU) can have significant financial implications, affecting their credit risk profile and, potentially, impairing their ability to operate. Thus, several financial regulators have launched, or are planning to launch, stress testing exercises to probe the financial sector’s resilience to climate-related risks. However, in a recent survey by the European Banking Federation, almost 50% of the respondents signalled major challenges in connecting climate data to credit risk modelling.[2]

In the following case study, we employ the market-valuation approach to almost 5,000 publicly-listed companies (within S&P Global Market Intelligence’s database), domiciled in the European Union (EU), and reveal how different response types can affect their creditworthiness over various energy-transition scenarios.

Figure 1 shows the estimated yearly costs of EU public firms, between 2020 and 2050, under a slow, moderate, and fast energy-transition scenario. These scenarios were prepared by Trucost, and take into account the difference in carbon tax evolution by country and, within the same country, by industry sector:

In the BAU case (dotted lines), companies do not adopt new technology and pay increasingly higher carbon taxes on emissions that grow in line with projected energy consumption and average economic growth. The overall yearly costs reach approximately half a trillion USD in 2050 (fast and moderate scenario), and are three times lower in the slow transition case.

The continuous lines refer to the case where companies face further costs to adopt new/greener technology, but manage to offset them by reducing carbon emissions, thus saving on the carbon tax hike. The overall yearly costs reach approximately USD100 billion in 2050, and remain broadly similar across all three scenarios. The bottom-line shows that, over a fast transition, companies will not necessarily incur higher overall yearly costs than over a slow transition, provided they manage to swiftly adopt new/greener technology over the next 30 years.[6]

Fig. 1: Distribution of credit score change by 2050 for public companies in the Materials sector, over a fast transition. Please, note the semi-logarithmic scale used to zoom in the y-axis. 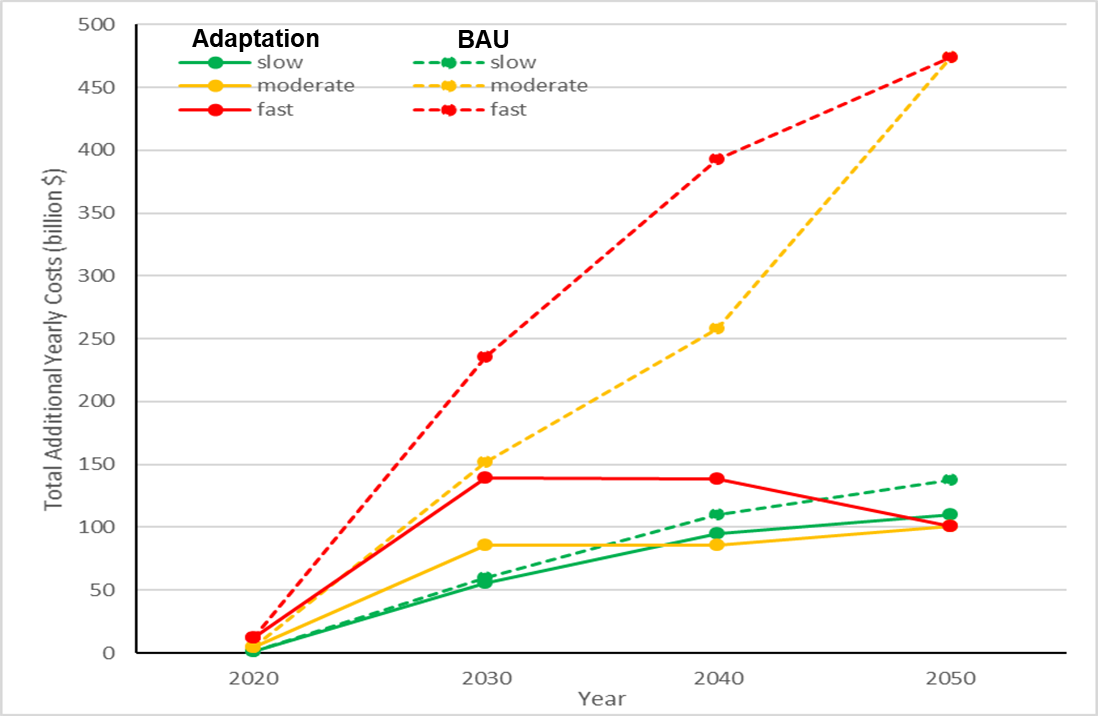 Source: S&P Global Market Intelligence. As of September 1, 2020. For illustrative purposes only.

Despite the additional costs representing a small fraction of the total revenues generated by EU firms listed in this dataset, the credit risk profile can change quite significantly depending on the firms’ response to the carbon tax increase.

Figure 2 shows the distribution of the credit score changes between 2020 and 2050 over a fast transition, where the carbon tax increases significantly.

Fig. 2: Distribution of the credit score change by 2050 for a sample of approximately 5,000 EU public companies, over a fast transition. Please, note the semi-logarithmic scale used to zoom in the y-axis.

Source: S&P Global Market Intelligence. As of September 1st, 2020. For illustrative purposes only.

In addition to the BAU and the Adaptation response, we include a Forced Action case, where companies do not manage to promptly adopt new technology, and governments impose progressively stricter caps on CO2 emissions (or ban the use of some highly-polluting materials), potentially inducing severe revenue losses among companies. Under such a draconian (and tail) response, most companies will suffer a credit risk deterioration (red bars to the right), and a large number will be at risk of default[7] by 2050. In the BAU case, where governments do not impose extreme restrictive measures, the number of companies at risk of default is lower. In addition, many firms will record larger revenues, driven by projected economic growth and, thus, may experience an improvement in their credit score (assuming their liabilities and other operating expenses remain at similar levels as today). In the Adaptation case, we find the lowest level of potential defaults by 2050 because the additional abatement costs to reduce carbon emissions are more than offset by the savings achieved to adopt greener technology and, thus, companies pay carbon taxes on reduced emissions.

A deep-dive by industry sector enables us to pinpoint the sectors with firms at a higher risk of default by 2050, for example, over the fast transition. Figure 3 considers only the two most likely response types (BAU and Adaptation), since the Forced Action case is an extreme measure.

Fig. 3: Cumulative default rate (by 2050) over a fast transition, for a sample of approximately 5,000 EU public companies, split by industry sector. 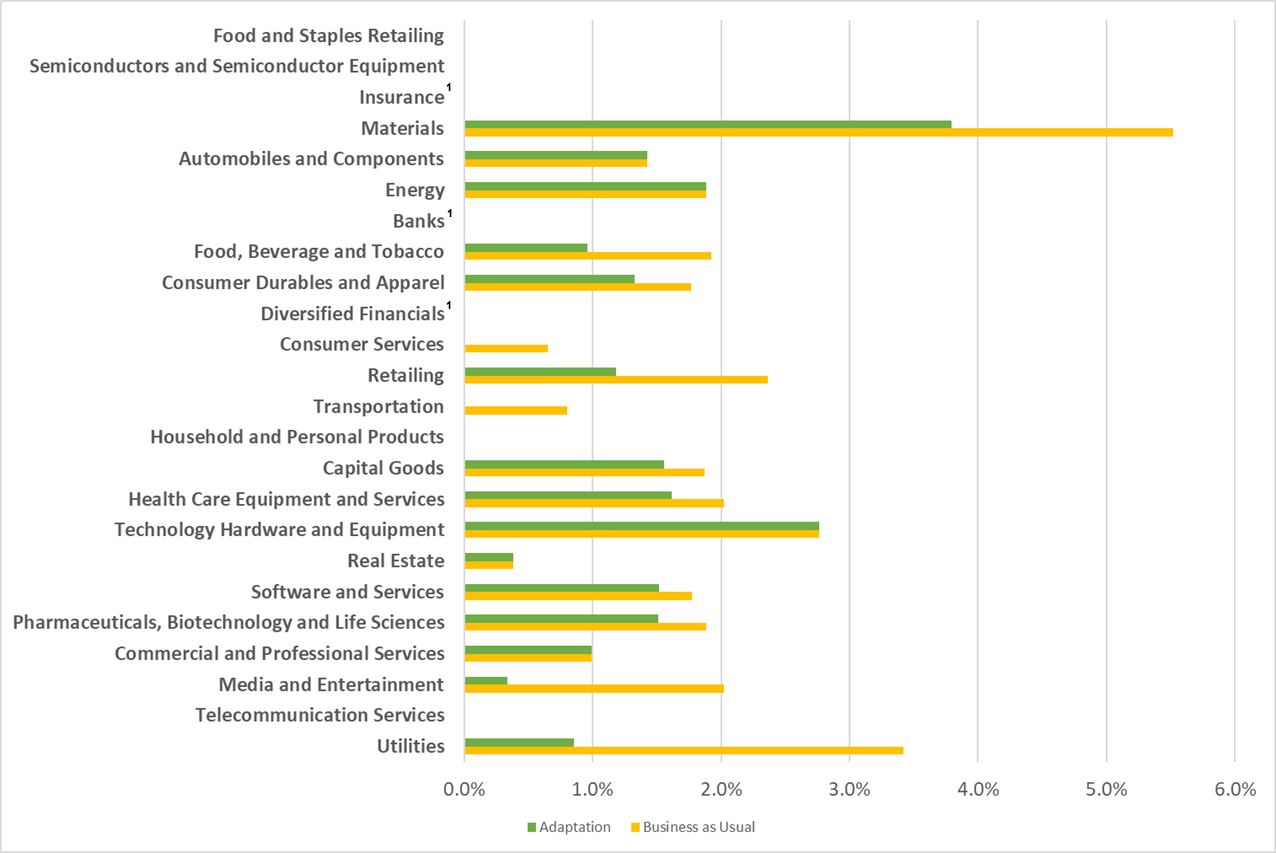 Source: S&P Global Market Intelligence. As of September 1st, 2020. For illustrative purposes only.1 For these sectors, we considered only the emissions produced by owned (i.e. reported in the balance sheet) or controlled (e.g. rented) assets.

Sectors at higher risk of default events by 2050, in the case of a fast transition (with a rapid increase of carbon taxation), include Materials, Utilities, and Technology Hardware and Equipment under a BAU response. The Adaptation response helps reduce the default rates in most sectors, but remains a significant source of risk in others (e.g., Technology, Hardware and Equipment, Energy, and Automobile and Components).

It is worth noting that our analysis is based on certain assumptions that can be modified by the user, and deliberately omits considerations about future macroeconomic cycles, so we can focus on the pure impact of energy-related transition scenarios. Moreover, the market-valuation approach enables the assessment of the main financial and credit risk impacts at an individual company-level.

Finally, for a sector-specific analysis and a detailed view of the full financial impact and credit score changes induced by future energy-transition scenarios, we recommend using the fundamentals-based approach included within Climate Credit Analytics

[3] The list will be finalized after collecting feedback from market participants.

[6] Incidentally, we note that over a slow transition scenario, companies would incur further costs due to the increase of physical risk events (both in terms of frequency and severity), due to the higher limit imposed on the global warming temperature.

[7] In this context, we consider only “technical defaults” where the market capitalization falls to zero.