At a time of unprecedented confinement measures keeping millions of individuals and families at home, more than a quarter of U.S. homes essentially rely on their wireline broadband connection to keep up with the latest crisis developments and video educational and entertainment programs.

We estimate that the number of U.S. wireline broadband households not subscribing to traditional multichannel jumped 5.6% sequentially in the fourth quarter of 2019. Overall, wireline broadband-only homes rose by a net 6.6 million in 2019, up a staggering 26% annually. 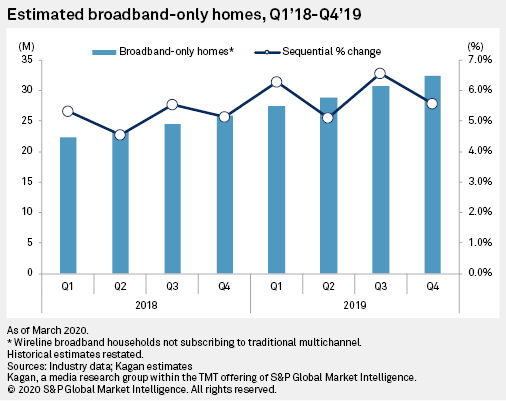 The large percentage of wireline broadband households choosing not to take traditional multichannel, likely more than one-third of the total as of March 2020, puts the question of data consumption in perspective.

However, our March 19 analysis of broadband data usage in the initial stages of the national emergency shows headroom for daily usage — when housebound Americans work, conduct online classrooms and strive to keep their children entertained — despite a surge from typical averages.

Broadband-only homes have been on the ascent for years. More of the same, theoretically, should be expected moving forward, especially as high-profile streaming services Peacock and HBO Max, offered by Comcast Corp. and AT&T Inc., respectively, join the ranks of over-the-top behemoths Netflix Inc., Amazon.com Inc.'s Amazon Prime and The Walt Disney Co.'s Disney+ in the second and fourth quarter.

But today, all bets are off regarding the trajectory amid measures to limit the spread of COVID-19. Americans households may accelerate cord cutting as the economy deteriorates, thus accelerating the rise of the broadband-only segment.

On the other hand, the crisis could compel consumers to take a fresh look at the value of tried-and-true services such as traditional multichannel, and even the landline phone, somewhat flattening the broadband-only curve.

In the latest round of earnings calls to discuss fourth-quarter 2019 results, top cable executives reiterated their focus on "connectivity." But they also reminded investors that they remain committed to video, particularly as an add-on service that may increase the stickiness of their broadband offerings.

A boost to the organic broadband subscriber trajectory in the first and second quarters of 2020 — the major wireline ISPs have announced measures to get households currently without an internet connection online — could be accompanied by an uptick in traditional video subscriber gross adds.

Note that our historical figures have been restated as a result of a larger broadband-only take rate than previously modeled among smaller-to-midsize cable operators and a recalibration of broadband-connected direct broadcast satellite households receiving their high-speed data service via satellite.

Our estimates of the "broadband-only" universe do not take into consideration those households relying solely on wireless data for their broadband needs.