Broadband-only homes' year-to-date net gains more than doubled on a record jump in the second quarter. This puts the segment on track to meet our 2020 target as the multiplication of high-profile over-the-top services expand consumer choices and facilitate cord cutting amid budget tightening in the COVID-19 era.

Perhaps unsurprisingly in the context of a global pandemic and its economic impact, which has led to tens of millions of Americans filing for unemployment benefits since the March national emergency, the three months ended June 30 marked the segment's second straight quarter in 8%-plus territory.

For the first half of the year interval, the net gain is about 80% higher than the previous record set in 2019.

Given the economic headwinds of the first half, U.S. households likely were looking to cut back on discretionary spending, including entertainment. At a monthly $100-plus average, traditional multichannel services stand out in budgeting decisions, particularly in the era of streaming video proliferation.

The OTT market expanded with the launch of AT&T's HBO Max in the second quarter, augmenting the palette of choices for traditional multichannel households considering cutting the cord.

AT&T Inc. has yet to disclose any customer data for HBO Max, but CEO and Director John Stankey in the company's earnings call July 23 said the product had a "strong launch, on track to hit its targets." Stankey added that the streaming service can contribute to augmenting AT&T's broadband subscriber net adds.

Comcast Corp.'s Peacock streaming service launched nationally on July 15 and already counted more than 10 million sign-ups by the end of July, underscoring the enthusiasm for high-profile OTT services and supporting unrelenting erosion for the traditional multichannel segment in the back half of 2020. 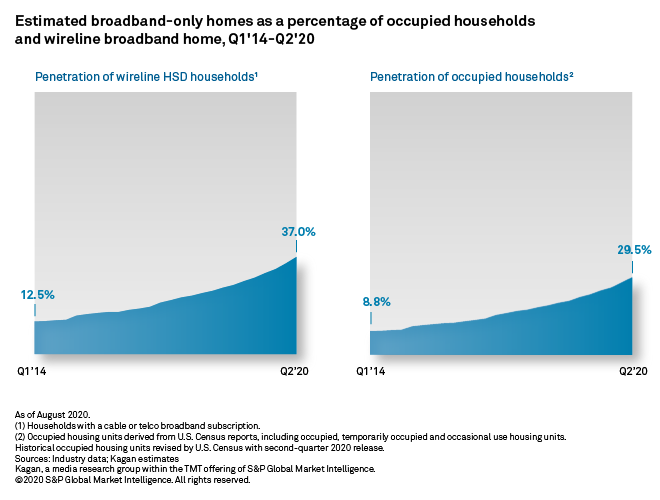 Our estimates of the "broadband-only" universe do not take into consideration those households relying solely on wireless data for their broadband needs.