Telcos in East Asia reported stable year-over-year fixed broadband subscriber and revenue growth in the first quarter despite the impact of COVID-19. Still, the monthly and quarterly numbers reflect traces of the crisis.

The region, which served a total of 382.7 million broadband households as of year-end 2019, was most affected in the first wave of the pandemic. Telcos have responded differently to the surging demand for broadband services and aim to increase and retain subscribers without lowering their ARPU. 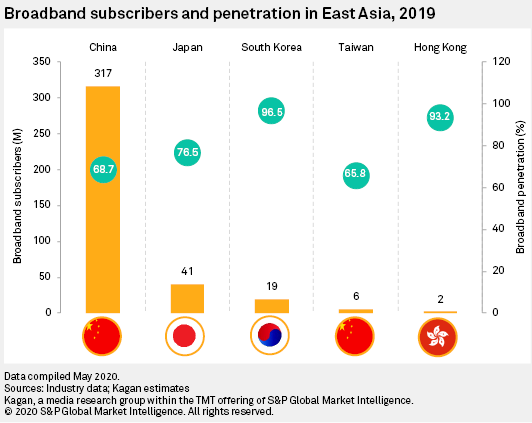 China was the first market to be hit by the outbreak of coronavirus in January and the government soon imposed stay-at-home and social distancing policies, including the lockdown of Wuhan. In the fourth quarter of 2019, the three incumbent telcos recorded subscriber loss soon after they raised prices and tightened the requirements for users of other services to access broadband for free or at a low cost.

Both China Mobile Ltd. and China Unicom (Hong Kong) Ltd. were able to drive 0.7% subscriber growth in January, but the lockdown in February minimized the monthly growth rate to a bare 0.2% for both telcos. China Telecom Corp. Ltd. reported the worst monthly subscriber loss of 810,000 households in the same month.

It was not until March that subscriber growth for the trio returned to levels similar to before the price increase, as the country gradually loosened measures against the virus. Total broadband subs for the three telcos increased by 7.3 million in the first four months of 2020, up by 1.7% since December 2019. 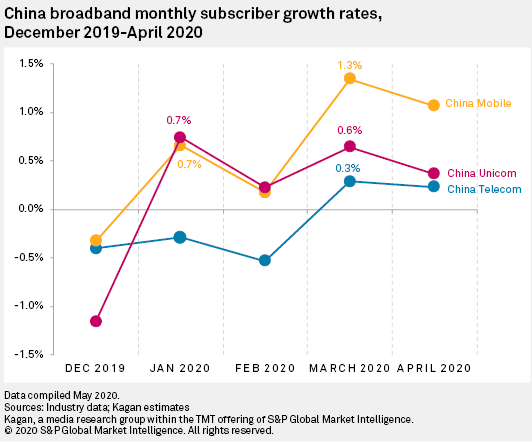 We observed a slightly greater impact on broadband revenue. While China Unicom managed to maintain quarter-over-quarter revenue growth of 0.9%, China Telecom and China Mobile logged decreasing growth rates at 1.8% and negative 3.3%, respectively. China Mobile reported a 5.2% drop in broadband ARPU in the first quarter. The contraction in China Telecom's first-quarter revenue was due primarily to a loss of subscribers in the same quarter.

China Telecom, the nation's largest ISP serving 32.9% of China's broadband subs as of year-end 2019, is offering its FTTH households with download speeds below 200 Mbps free upgrades to 200 Mbps until the end of June. Households can also upgrade to 500 Mbps downstream at a 50% discount. Subscribers in Fujian province received free upgrades to 500 Mbps downstream in February when the country was reinforcing stay-at-home measures.

In terms of broadband revenue, both KT and SK Broadband's highest quarter-over-quarter growth in the past year occurred in the first quarter of 2020, at 1.4% and 1.3%, respectively. According to KT, it was driven by the increased adoption of higher-tier gigabit internet plans, including one with download speeds of up to 1 Gbps for 36,300 won per month.

As of the first quarter, gigabit internet households accounted for 62% of KT Corp.'s broadband subscriber base. While broadband ARPU has remained relatively low in South Korea, subscribers are less hesitant to upgrade to higher-cost plans.

To meet the needs of students taking classes online, KT and SKB give out free laptops/tablets to new subscribers of their gigabit internet and IPTV bundles, while LG U+ provides subscribers with discounts on higher-end laptops/tablets. Other popular broadband signup gifts are personal healthcare products such as air purifiers.

Unlike its competitors, LG U+ reported negative revenue growth of 3.2% in the first quarter; however, substantial growth in the second and fourth quarters of 2019, of 5% and 6.8%, respectively, offset the fall. As a result, the telco achieved year-over-year revenue growth of 6.4% as of March, in line with the prior-year period's 6.6%.

Telcos in Japan and Taiwan reported stable quarter-over-quarter and year-over-year subscriber and revenue growth in the first quarter as the outbreak of coronavirus heightened demand for bandwidth. In Japan, Nippon Telegraph and Telephone East Corp. and Nippon Telegraph And Telephone West Corp. reported a surge of up to 61% and 49%, respectively, in weekday daytime traffic since the government declared a state of emergency in most parts of the country.

Other forms of promotion are found in markets with less stringent stay-at-home policies. Hong Kong Telecommunications (HKT) Ltd. in Hong Kong and Chunghwa Telecom and China Network Systems Co. Ltd in Taiwan offer subscribers the flexibility of a shorter contract term. HKT offers no contract period for its service with download speeds of up to 1,000 Mbps at the same price charged to a normal 24-month contract; however, it charges an installation fee of HK$680, which is waived for contract customers. CHT and cable MSO CNS launched plans with six-month contract periods at the same monthly rate as their 24-month contracts. Users of CHT's six-month service are also entitled to a waiver of the installation fee.

Other operators in Taiwan are attempting to boost their subscriber bases through different promotions. Sister cable MSOs kbro Co. Ltd. and Twm Broadband rolled out a monthly lucky draw, with a prize of a 40-inch TV, to new subscribers to its broadband and/or cable TV services. While subscribers to each service are entitled to enter the lucky draw once, broadband subs can also receive an online shopping coupon worth NT$600.

Instead of offering promotions on fixed broadband services, SoftBank Corp. and KDDI Corp. in Japan provide 50 GB of free mobile data to subscribers below the age of 25. The promotion is aimed to assist students who would stream online classes on smartphones and/or tablets.