LCD Monthly: Demand for US loans puts borrowers in the driver's seat

Leveraged finance volume already reached record levels for an August period after less than half a month, reflecting both a continuation of the heady pace for high-yield bonds, and an eye-catching acceleration in leveraged loan activity.

Bonds continue to lead the charge, with high-yield issuance eclipsing the prior peak for a full August period.

While leveraged loans continue to lag the field in August, accounting for about one-third of the August leveraged finance total, that amount marks a three-year high for an August period.

Leveraged finance volume already hit record levels for an August period after only half a month, reflecting both a continuation of the heady pace for high-yield bonds, and an eye-catching acceleration in leveraged loan activity. 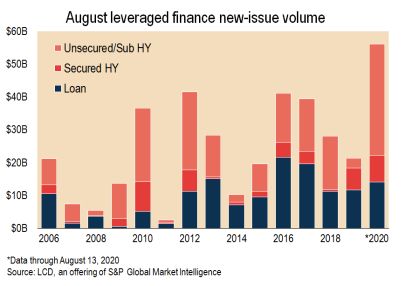 Bonds continue to lead the charge. High-yield issuance across all priority claims totaled $42 billion through Thursday, vaulting above the prior peak for a full August period of $31.6 billion, in 2010. Issuance has now set records for the respective calendar-month periods since May, driving 2020 issuance 68% ahead of last year’s pace, and already ahead of all full-year totals since 2014. 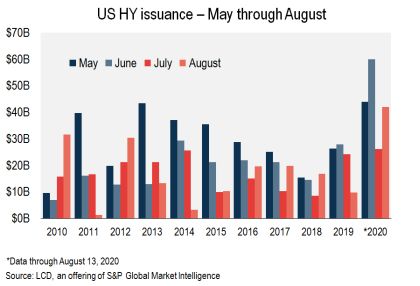 Unsecured volume is in record territory for an August period, at $34 billion so far this month, versus the prior high of $24 billion, in 2012. Secured bond volume, at $8.0 billion, is less pronounced, in the context of an August peak of more than $9.2 billion, in 2010.

The secured-bond share of total issuance has dipped sharply since April, when issuers placed nearly equal amounts of secured and unsecured bonds. That month, leveraged loans accounted for just $8.7 billion of the $45.5 billion of leveraged financings, or roughly 19%.

While leveraged loans continue to lag the field in August, accounting for $14.1 billion of the August leveraged finance total, that amount marks a three-year high for an August period, in the context of high-water August totals of $21.6 billion in 2016, and $19.6 billion in 2017. Loans’ share of the overall leveraged finance market is also up to roughly 25% so far this month, a notable shift for the variable-rate asset class, especially in light of this week’s pivot higher for underlying Treasury yields.

Meantime, the unflagging pace for high-yield bond issuance comes with new all-time lows for new-issue yields. Through Aug. 13, new-issue yields across all high-yield placements this month averaged 5.09%, down 137 bps from the July full-month average, and roughly two points lower relative to the April average. The prior low, per data since 2006, was the pre-pandemic, 5.25% average recorded in February this year. 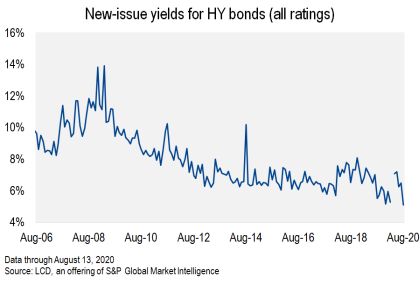