Over the last five years, multichannel and fixed broadband households have grown by 29% and 20%, respectively.

This places Belarus on third place in Eastern Europe in both pay Tv penetration and fixed broadband penetration.

The Belarusian pay TV and broadband market is dynamic and highly developed.

The Belarusian pay TV and broadband markets have been dynamic and highly developed. Over the last five years, multichannel and fixed broadband households have grown by 29% and 20%, respectively. In 2019, pay TV in Belarus reached 3.8 million subscribers, equating to a TV household penetration rate of 92.1%. Fixed broadband was delivered to 3.2 million households in 2019, which translates into a 75.7% household penetration rate. This put Belarus in third place in Eastern Europe in both metrics. The rapid growth of both multichannel and broadband services was largely driven by the dynamic development of IPTV services and fiber rollouts, fueled by competition among key providers such as incumbent Beltelecom, as well as Telekom Austria Group's A1 Belarus, formerly known as VELCOM. 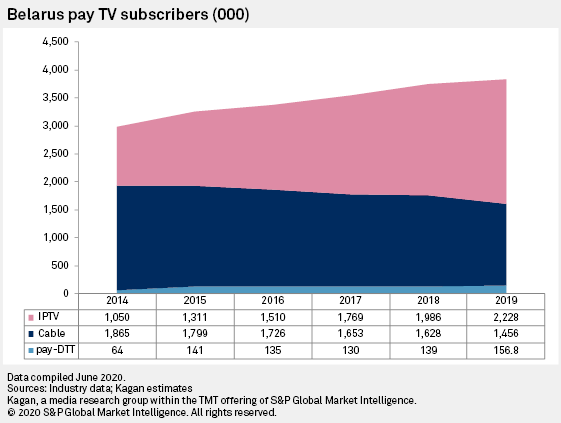 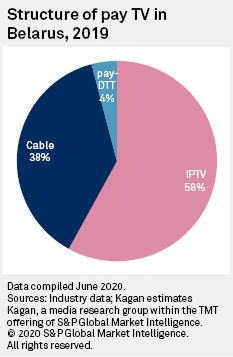 IPTV overtook cable in 2017 and became the biggest pay TV platform in Belarus, with subscribers rising by 112% over the last five years. With 2.2 million subscribers at the end of 2019, IPTV represented 58% of the whole pay TV market. The incumbent telco, Beltelecom's service Zala TV, is both the biggest IPTV and pay TV operator. A1 Belarus services the rest of the IPTV market, with 386,300 subscribers as of year-end 2019.

Cable operators in Belarus served 1.5 million subscribers, representing 38% of the total pay TV market as of the end of 2019. Over the last five years, cable subscribers have shrunk by 22%, making it the least dynamic platform. The leader in the local cable market is Cosmos TV, a cableco delivering up to 117 channels and internet with download speed up to 300 Mbps as of June 2020.

In Belarus, there is no local direct-to-home provider. However, as ethnic Russians and ethnic Poles compose 8% and 3% of the population, respectively, the free-to-air satellite services from Russia and Poland are popular. The lack of a paid satellite platform is successfully offset by Beltelecom's pay digital terrestrial television service Zala TV. Over the last five years, pay DTT has grown by 145%, serving 156,800 households as of year-end 2019. Further dynamic growth of pay TV is rather unlikely, as Belarus already has second-highest penetration rate in the region. 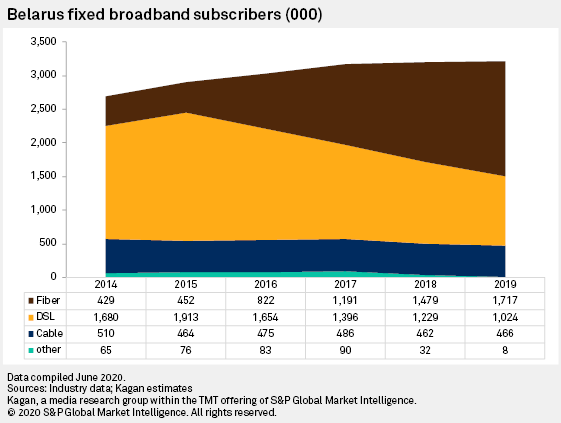 Successful fiber rollout made it the leading fixed-broadband platform in Belarus, with over 1.7 million subscribers as of year-end 2019. With the third-highest penetration in the region, further dynamic growth of fixed broadband is also unlikely as the service is near saturation. The transition from DSL to fiber should continue, however, as well as a slow erosion of cable broadband.