With the coronavirus (COVID-19) pandemic forcing companies to shift to work-from-home operations, schools to adopt online education, and individuals to self-isolate and practice social distancing, telcos in Australia and New Zealand are putting together new measures to ensure connectivity for homes and businesses. A slew of data and voice plans have been made available to support telecom customers in both markets during the crisis.

Singtel-owned Optus on March 16 became the first to announce a relief package in Australia. The operator is offering eligible postpaid mobile subscribers a bonus of 20 GB of data and prepaid subscribers 10 GB data during April. To further help customers who may have difficulty paying their bills during the pandemic, Optus is also waiving any charge of late fees until after April.

As the largest telco in Australia, Telstra Corp. Ltd. soon followed suit with a similar move. It has gone one step further, upgrading all broadband customers to an unlimited plan until the end of April. All eligible pensioners are also allowed to make unlimited calls.

In addition to data and voice bonuses, Vodafone, operating in both countries, offers its customers unmetered access to health and education websites via devices on its network. Our data indicates Vodafone NZ is the second-largest fixed broadband provider in New Zealand, but remains a smaller player in Australia given its late entry to the market. In February 2020, Australia's federal court approved the proposed merger between Vodafone Australia Pty. Ltd. and TPG Telecom Ltd., which had previously been opposed by the Australian Competition and Consumer Commission (ACCC), citing concerns over reduced competition in the mobile market. 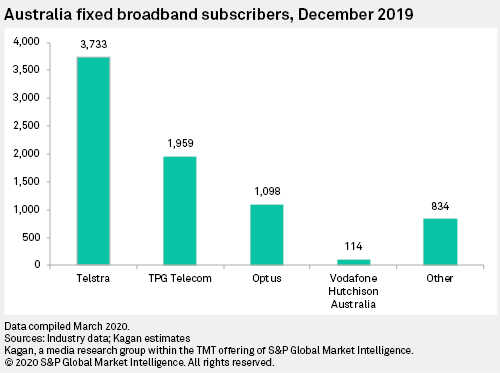 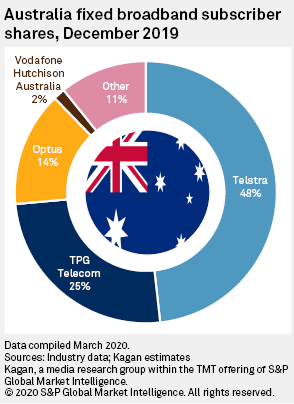 In New Zealand, telcos including Spark New Zealand Ltd., Vodafone, Vocus Group Ltd. and Two Degrees Mobile Ltd. are emulating their Australian peers by upgrading plans with data caps to unlimited. Most will also waive late payments for various durations. Spark, which owns sports streaming platform Spark Sport, has gone so far as to allow all New Zealanders to use the service free of charge until May. Regular subscription to Spark Sport costs NZ$19.99 per month.

As of March 25, of the 14 ISPs in Australia and New Zealand, seven have offered free unlimited data plans to all broadband users, seven have waived late fees, and six have given free bonus add-ons for data or voice, among other measures. 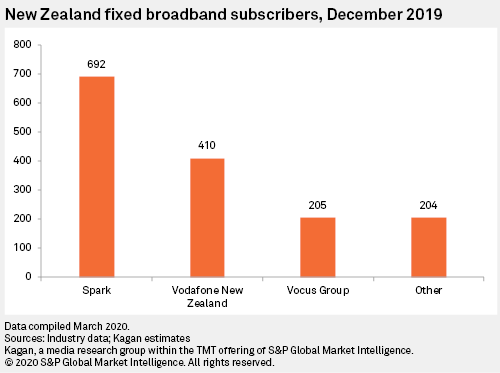 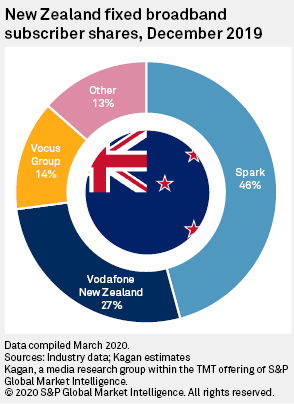 Although most telcos have seen increases in internet traffic over the past few weeks, our projection models do not account for the COVID-19 pandemic. With fixed broadband penetrations in Australia and New Zealand near saturation, our forecast indicates both markets will achieve 1.3% subscriber growth during 2020.

Besides the enhanced telco plans, the markets' video industry is also responding the crisis, with Foxtel Holdings Pty Ltd. offering its premium entertainment, lifestyle, documentary, reality and kids channels and packages at no extra charge to existing subscribers who had not subscribed to such content, as well as to new customers. The bonus applies to subscribers of either Foxtel satellite or Foxtel Now streaming platforms, and is valid through May.

As the Australian Football League (AFL) and National Rugby League (NRL) suspended their 2020 seasons, Foxtel's sports streaming platform, Kayo, has worked with both leagues to let AFL and NRL ticketed members use its OTT service for A$5 for two months. A regular subscription to Kayo starts at A$25 per month.

On March 24, Sky New Zealand announced it would make Sky News available to Sky Starter customers for the next three months. In the wake of the postponement of the Tokyo 2020 Olympics, Sky also launched an official Olympic Channel, featuring past and present stories of Olympic athletes.