Climate change induced by greenhouse gas (GHG) emissions has been argued to pose a serious threat to life on earth. Over the past few years, it has become a hot topic of debate among governments, central banks, and regulators due to possible business disruptions and, potentially, financial losses. This may also lead to further detrimental consequences, ranging from a slowdown of a country’s economic output to increased unemployment to financial market instability.[1]

Since the 2015 Paris Agreement, 180+ countries[2] have committed to accelerate the transition to a low-carbon economy by enacting a variety of policies. This includes the introduction or increase of a carbon tax.  Major central banks and financial regulators across the world are planning to test the financial markets’ preparedness for associated physical and transition risks by introducing ad-hoc scenarios to financial institutions’ annual stress-testing exercises.

While scenario analysis is routinely performed by risk managers at financial institutions and non-financial corporations, energy transition risks pose new challenges. This includes the longer time horizons needed for the analysis, the scarcity of quality company emission data, and the lack of an established quantitative approach linking energy transition risks and opportunities to credit risk.

S&P Global Market Intelligence, in consultation with Oliver Wyman,[3] developed the Climate Credit Analytics tool enables users to estimate the impact of a carbon tax on companies operating in the upstream Oil & Gas sector, one of the most carbon-intensive sectors. Currently covering more than 1,200[4] public and private companies, it provides a fundamentals-driven view of how a future carbon tax increase may affect each item reported within company financial statements over the next three years. Users can explore the impact of global carbon tax scenarios (where the carbon tax increases by a user-defined percentage across all countries) or the integrated scenarios generated via a global energy-economy-climate model (REMIND).[5] The estimated financials can then be run via Credit Analytics’ CreditModelTM, a quantitative model that generates a credit score. The score aims to statistically match S&P Global Ratings issuer credit ratings for rated companies, which can also be applied to unrated companies.[6]

The Climate Credit Analytics tool can help users perform stress testing and scenario analysis, as well as comply with the Task Force for Financial Disclosures (TCFD) recommendations. These recommendations are expected to become mandatory over the next few years for the signatories of the Principles for Responsible Investment (PRI).[7]

A Sample Climate Scenario for ConocoPhillips

As a baseline, the S&P Global Market Intelligence analytical team leveraged ConocoPhillips’s financial statement data as of the end of 2018 when the firm’s estimated credit score was ‘a-’. They then used Climate Credit Analytics tool to calculate the projected scenario-based financials and associated credit score for a three-year time horizon, assuming that a global carbon tax was introduced in 2019 and increased linearly to $50 USD/tCO2 by 2021. 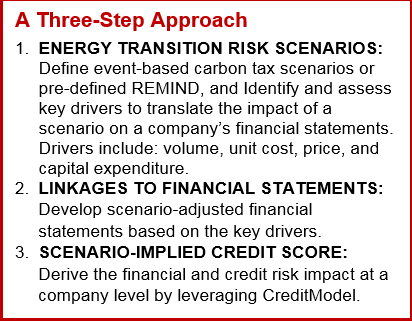 As shown in Figure 1 below, the impact of a carbon tax was limited at first, and the projected credit score remained stable throughout 2020. This may be attributed to ConocoPhillips’s leading position as a large Oil & Gas producer with global diversification, making it relatively less sensitive to a carbon tax increase. However, the credit score deteriorated to ‘bbb+’ in 2021 as the firm’s creditworthiness was impacted by the carbon tax.

Complementing the Climate Credit Analytics tool, CreditModel enables users to identify which financial ratios will be most affected by the introduction of a carbon tax and be the main drivers of a credit score change. For example, the Gearing ratio, Asset Turnover, and EBIT Interest Coverage Ratio are the largest contributors to the credit score for ConocoPhillips in 2019, as shown in the Absolute Contribution Analysis below. This enables users to perform a detailed analysis of the drivers and sensitivity of a credit score for a chosen climate-transition scenario.

Figure 1: Creditworthiness for ConocoPhillips and a three-year projection of the impact of a $50 USD/tCO2 carbon tax scenario 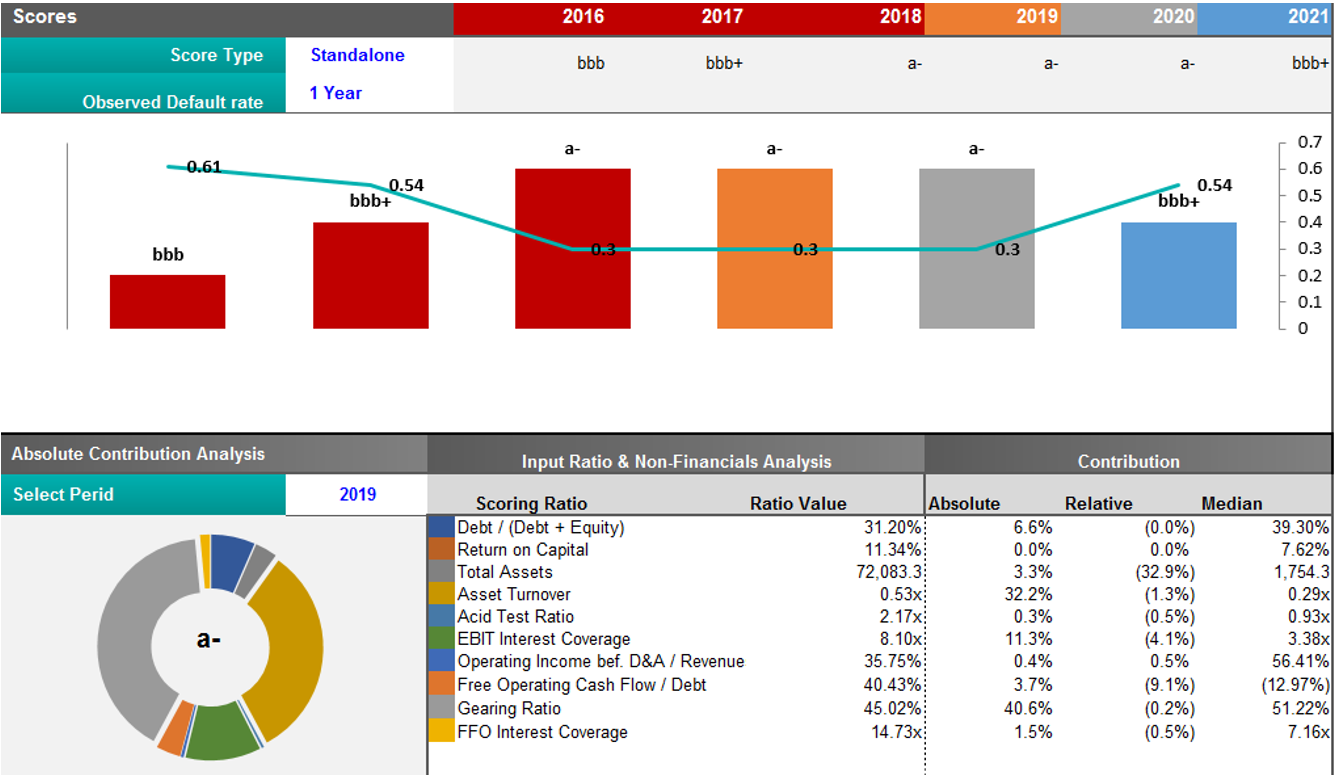 [1] “Climate Change: why it matters to the Bank of England”, Bank of England (available at: https://www.bankofengland.co.uk/knowledgebank/climate-change-why-it-matters-to-the-bank-of-england - November 1, 2019).

[3] Oliver Wyman is a global management consulting firm and is not an affiliate of S&P Global, or any of its divisions.