The proliferation of over-the-top video has taken its toll on the traditional pay TV industry in the Asia Pacific region. The impact was felt across the multichannel landscape in many markets as the region lost nearly 5.9 million cable TV subscribers and 600,000 DTH subscribers in 2018.

Over the next ten years, Kagan analysis indicates the number of total multichannel subscribers in Asia Pacific will continue to increase annually, but at a slower rate than in the past. As a result, multichannel penetration of TV households will largely remain flat at roughly 70% beyond 2019, as further growth is constrained by pay TV alternatives including OTT and free-to-air digital terrestrial or satellite services.

China and India remain the two largest multichannel markets by subscriber, collectively accounting for nearly 80% of the region's total pay TV households. On the flipside, their multichannel subscription average revenues per user are among the lowest in the region at typically $2.00 to $3.00 per month, resulting in smaller market shares in terms of revenue.

In 2018, total multichannel subscription revenue for Asia Pacific reached $34 billion, a 3.1% year-on-year growth. As ARPU improves, our analysis indicates multichannel revenue is projected to grow at a 4.9% CAGR over the next ten years, and will reach nearly $56 billion by 2029.

Region-wide, cable is expected to maintain its lead position within the next ten years in both subscriber and revenue terms. Nevertheless, its shares will be eroded year after year by DTH and IPTV. Our analysis estimates cable accounted for 58.2% of multichannel households and 56.1% of multichannel service revenue in the Asia Pacific in 2018. 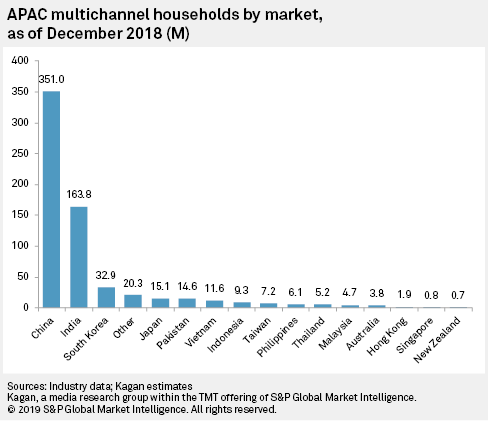 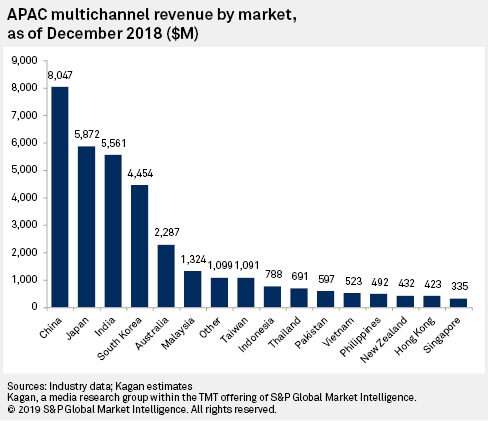 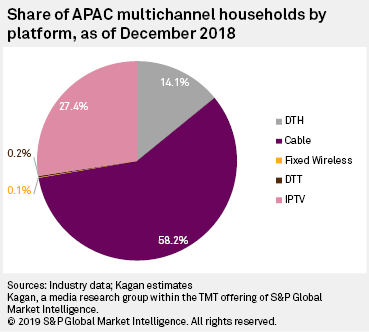 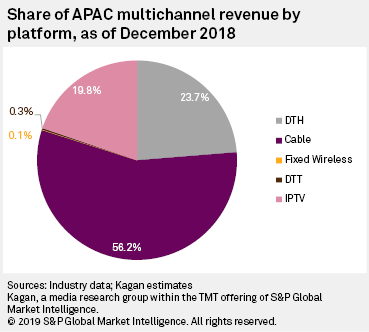 Our analysis indicates the DTH sector served 91.6 million multichannel households in the Asia Pacific as of 2018, a minor 0.6% fall from the previous year. Despite the decline, we anticipate DTH will regain subscriber growth in the region over the next ten years with a 4.7% CAGR, reaching 153.8 million households by 2029. During the same period, DTH service subscription revenue is projected to grow from $8.07 billion in 2018 to $14.48 billion by 2029.

India will remain the single largest DTH market in Asia Pacific, with a roughly 70% subscriber share and more than 30% revenue share for the foreseeable future. However, the market generated the lowest DTH ARPU in the region during 2018, at just $3.12 per month. In contrast, the highest DTH ARPU in the Asia Pacific was found in Australia, at $66.39 per month in 2018.

Within the Asia Pacific, DTH is the dominant multichannel platform by subscriber count in Australia, India, Malaysia, Myanmar, New Zealand, the Philippines and Sri Lanka. Long term, while India will continue to be the main driver for DTH growth in the region, our analysis indicates the DTH market size will shrink across several geographies, including Japan, Malaysia, New Zealand and South Korea. Shifts in consumer preference from full multichannel packages to flexible online video alternatives are largely what is stopping DTH businesses from growing in these markets. 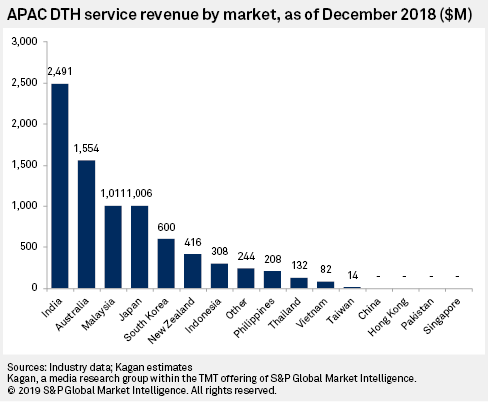 The cable TV market in Asia Pacific has been losing multichannel subscribers since 2016, a trend we anticipate will persist over the coming years. As of 2018, cable served 377.5 million pay TV households in the region, down 1.5% from the previous year. The biggest cable TV subscriber churn occurred in China with loss of 6 million connections in 2018, as a result of the fast growing IPTV and OTT sectors. During the same period, cable experienced subscriber declines across a number of other territories as well, including Hong Kong, Japan, Philippines, New Zealand, Singapore, Korea, Taiwan and Vietnam.

Over the next ten years, cable TV subscription revenue is projected to grow at a 3.3% CAGR, from $19.1 billion to $26.4 billion by 2029. Taking inflation into account, revenue growth at a regional level will largely stay flat, with revenue losses expected in New Zealand, Taiwan and Singapore. In fact, existing operators in both Singapore and New Zealand are phasing out their cable TV platforms in favor of IPTV and OTT.

Digitization of analog cable systems has been fully achieved in Australia, Hong Kong, Japan, New Zealand, Singapore and Taiwan as of 2018, with additional markets on their way to digitization within the next ten years. At year-end 2018, our analysis indicates 71.9% of cable TV households in Asia Pacific markets had a digital connection, a figure projected to increase to 96.6% by 2029. Historically, analog cable connections were prone to widespread content piracy in the form of signal theft in many parts of the region. 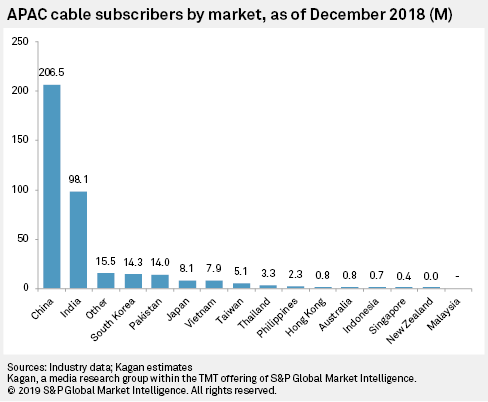 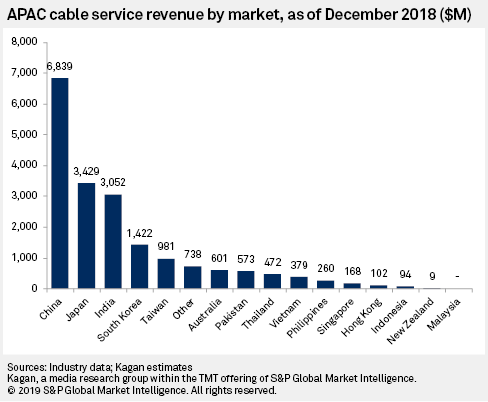 IPTV is the fastest growing multichannel platform in Asia Pacific. As of 2018, our analysis indicates the total number of IPTV households had reached 177.9 million, up 22.4% year over year. Much of the growth came from the Chinese market, where IPTV is marketed as a telco value-added service with minimal monthly cost. Over the next ten years, we anticipate China's pay TV sector will become nearly saturated, hence the slowdown in overall IPTV subscriber growth region-wide. By 2029, the Asia Pacific IPTV subscriber base is projected to reach 329.5 million connections.

With a 10.7% increase year on year, subscription revenue for IPTV service amounted to $6.7 billion in 2018 across the region, and is projected to more than double by 2029 to $14.3 billion. Since 2010, The IPTV economy in Asia Pacific has been dominated by South Korea, Japan and China, which in 2018 collectively accounted for three quarters of aggregate revenue. Although China grabbed more than 80% of the region's IPTV households in 2018, it only contributed to less than 20% of revenue due to the sector's ultra-low monthly ARPU at less than $1.00. In contrast, New Zealand generated the highest IPTV subscription ARPU in 2018, at an estimated $50.58 per month. 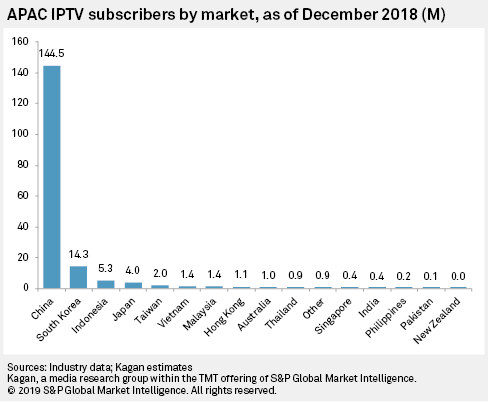 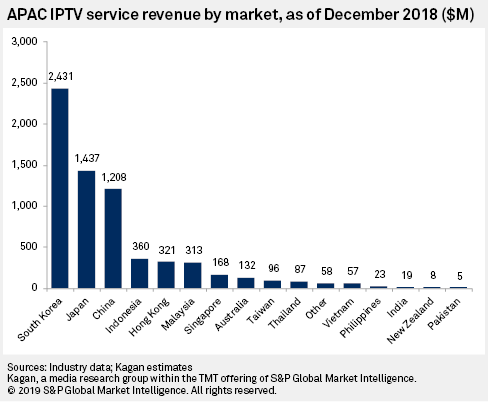 More than 216 million households in Asia Pacific, according to our estimate, received free-to-air digital terrestrial TV in 2018, translating to a 23.2% penetration rate of TV households. As national governments facilitate implementation of digital switchover initiatives, the number of FTA DTT homes is projected to more than double within the next ten years, reaching 448 million by 2029.

As of 2018, countries in the Asia Pacific that had completed analog switch-off included Australia, Japan, New Zealand, Singapore, South Korea and Taiwan, with more countries working toward full digitization in the coming years.

Subscription-based DTT services are available in select Southeast Asian markets including Indonesia, Philippines and Vietnam. As of 2018, we estimate pay DTT served 1.4 million subscribers, maintaining a niche position in the region's multichannel landscape. In these markets, pay DTT is often offered as a low-cost alternative to full-fledged multichannel packages over DTH, cable or IPTV. 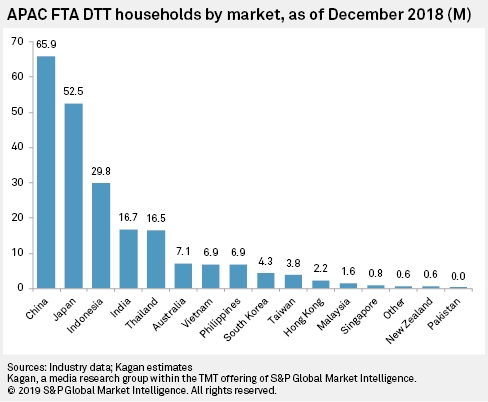 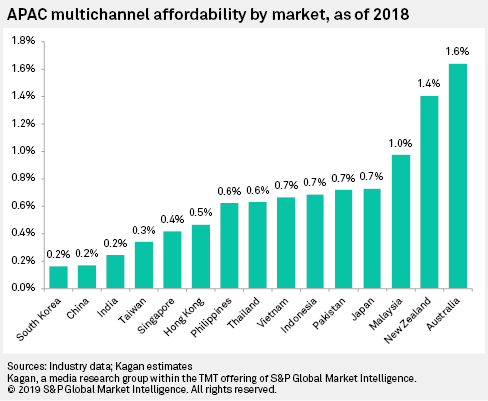