Another Outcome Of COVID-19: Olympics Postponed

As live professional sports hit a standstill around the world, a new casualty of postponement is the 2020 Summer Olympic Games, formerly scheduled to begin in July. Comcast Corp.'s NBC had licensed U.S. rights to the games for an estimated $1.4 billion. However, the impact will be spread across their broadcast and cable networks, along with TV stations, since most outlets were slated to air some of the games.

Total revenue from the 2016 Rio games was $1.6 billion, which included nearly $1.2 billion in advertising. In early March, NBC revealed that it had received more than $1.25 billion in commitments against the games, selling 90% of inventory for national ads. That figure is about 6% above the total delivery for the 2016 games. 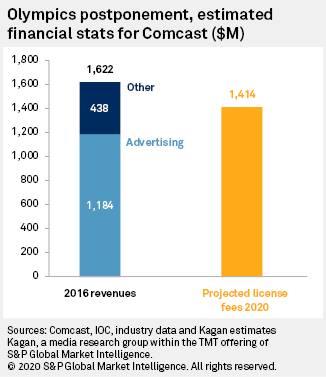 There will be other effects for Comcast, including the challenges filling summer programming schedules for its networks and stations. Peacock could also be hurt, with the Beta launch on April 15 and national debut planned for July 15. The latter launch was timed to take advantage of Olympic programming and help push for new subscribers.

Chairman and CEO Brian Roberts said on March 3 at the Morgan Stanley Technology, Media & Telecom Conference that Comcast is protected via contract language and insurance for expenses incurred in case of cancellation of the games. Roberts further said, "there should be no losses should there not be an Olympics, just wouldn't be a profit this year."

While several National Olympic Committees had asked for a postponement, and countries such as Australia and Canada had already withdrawn, it was only on March 24 that Japan's Prime Minister Shinzo Abe and International Olympic Committee President Thomas Bach agreed to postpone the games. The IOC will decide the fate of the games within the next four weeks, which are likely off until 2021. The Games have not previously been postponed, but were canceled during World War I (1916) and World War II (1940, 1944).