The amount of venture capital raised by financial technology companies in the Asia-Pacific region dropped 58.5% sequentially to $1.3 billion in the first quarter, with India-based companies attracting the most funding. Across the six industry segments tracked by S&P Global Market Intelligence, payment companies led the pack in terms of total capital raised and number of investments. Investors' continued interest in challenger banks amid the COVID-19 outbreak offers optimism to newly minted digital banks and virtual banking contenders in the region.

India-based fintechs raised a total of $543.4 million, accounting for 42.9% of total Asia-Pacific fintech funding in the first quarter. While India saw the largest dip in fintech investments from the previous quarter, this was largely due to the absence of mega funding rounds. In November and December 2019, One97 Communications Ltd., the parent company of Paytm, pulled in $1.7 billion over two fund raises. Excluding these transactions, investments in India-based fintechs in the first quarter would have grown by 17.9% sequentially.

The outlook for fundraising activities in the near term is likely to be subdued. India, which has been on a stringent lockdown since March, is clamping down on foreign investments from neighboring countries including China. The move was initiated to prevent opportunistic takeovers of Indian corporates at a time of crisis when asset prices are depressed. Foreign investments are now subject to mandatory government clearance, which may stem new capital inflows.

Meanwhile, as China regains control over the COVID-19 outbreak, the pace of fintech funding appears to be gaining momentum with consistent growth in capital raised across the first three months of 2020. But SoftBank Group Corp.'s ongoing struggle to pare down portfolio losses and attract investors for its second Vision Fund could be an indication that technology startups around the world will face difficulties in raising money in the months ahead. 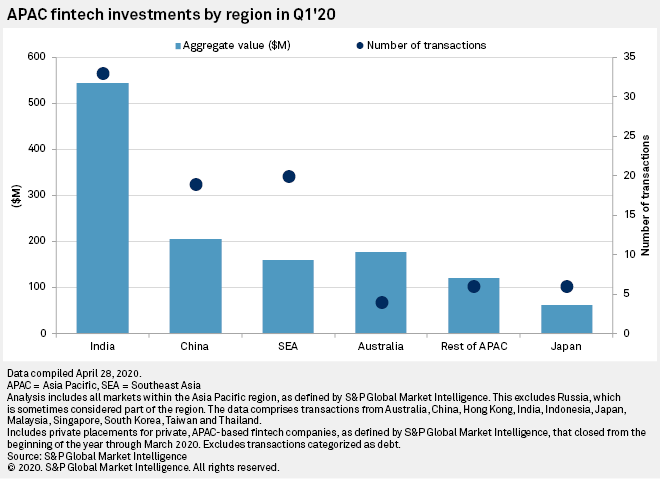 Go Digit General Insurance Ltd. was the top-funded fintech in India and the only insurance technology company involved in the 10 largest Asia-Pacific fintech funding transactions in the first quarter. In January, Go Digit raised $83.9 million in a series B round at a pre-money valuation of $786 million. The proceeds will in part be used to shore up its solvency ratio.

The full-stack insurtech company offers a range of nonlife general insurance though motor insurance accounts for the bulk of premiums written. Go Digit has invested in improving the efficiency of its claims process with flight delay claims achieving 100% automation. The company actively tracks customers' flights and automatically triggers an SMS to initiate the claim process once the schedule has been delayed beyond a stipulated time. Users only need to send in their boarding pass to receive payment. The company also provides a smartphone-enabled self-inspection feature that has reduced motor insurance inspection process from seven days to seven minutes. Established in 2017, the firm now has 9 million customers. 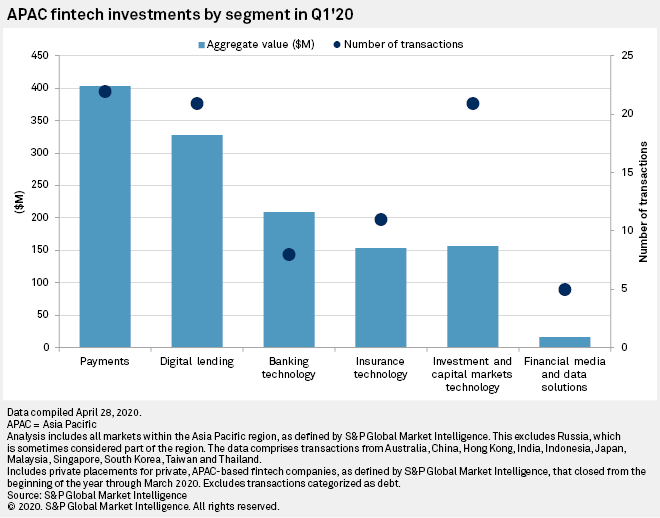 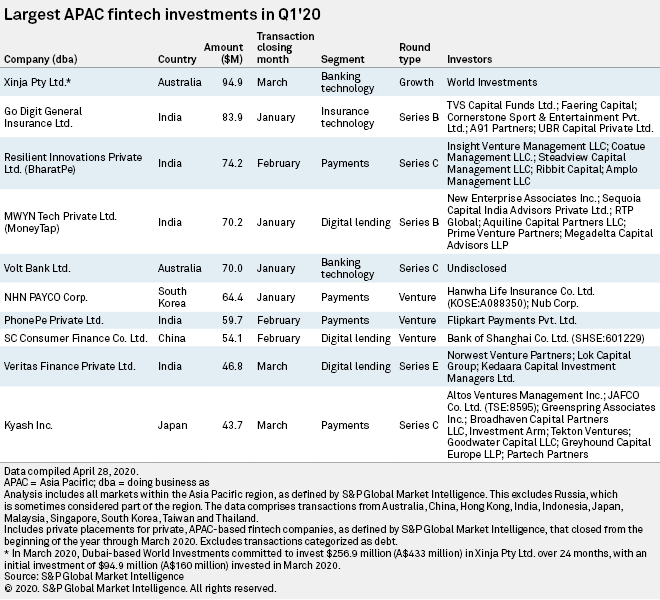 Payment companies were the top-funded fintech segment with $403 million raised across 22 transactions. Mobile payment apps in particular saw larger funding rounds and accounted for three of the 10 largest transactions in the first quarter.

South Korea's NHN PAYCO Corp. raised $64.4 million in January. Its mobile wallet facilitates both offline and online payments, though online transactions account for 90% of its payment volume. The focus on online payments has served Payco well amid the COVID-19 pandemic. In the first quarter, the payment operator saw 31% year-over-year growth in transaction volume.

PhonePe Private Ltd. which operates one of the leading mobile payment apps in India, received $59.7 million in funding from Flipkart Payments Pvt. Ltd., which is also owned by Walmart Inc. The transaction came in February, just two months after PhonePe's previous $82.5 million fundraising round. The cash infusion will come in handy amid the pandemic and stiff competition in India's digital payment space. Besides local rival Paytm, PhonePe also has to contend with payment platforms operated by U.S. big technology companies such as Alphabet Inc.'s Google Pay and Amazon Pay, which are seeking to extend their dominance in India. Facebook Inc.'s recent investment in Reliance Industries Ltd.'s Jio Platforms Ltd. is also expected to accelerate the rollout of WhatsApp Pay in India, which is reportedly set to take place by end May. PhonePe aims to turn profitable by 2022 and plans to go public in 2023.

Japan's Kyash Inc. raised $43.7 million in a series C round in March and intends to use the proceeds to expand into the banking sector. The round was co-led by new investor Greenspring Associates LP and returning investor Goodwater Capital, which has also backed virtual banking players such as U.K.-based Monzo Bank Ltd and South Korea's Viva Republica Co Ltd.The latter, which operates mobile financial services platform Toss, only recently secured a banking license. Kyash started out by offering a mobile wallet for consumers that facilitates payments and peer-to-peer transfers. The payment operator ventured into the business-to-business segment in 2019 with the launch of Kyash Direct, a payment processing platform that allows customers to plug into its application programming interfaces to issue white-label Visa prepaid cards, providing instant access to digital payments.

In March, Xinja had secured a two-year capital injection of A$433 million (US$256.9 million) from World Investments, which includes an up-front investment of A$160 million (US$94.9 million). The remaining sum was scheduled to be provided in multiple tranches over the next 24 months.

The cash injection is timely, as margins are expected to be tightened following the two successive rate cuts initiated by the Reserve Bank of Australia in March, which saw rates slashed to 0.25%. Xinja initially decided to pause new account openings for its savings product, Stash, in order to maintain the interest rate for existing customers at 2.25%. But without charging account fees or offering loans or credit cards, the bank is largely reliant on external capital to fund interest costs, and holding the prevailing interest rate as deposits grow would likely be unsustainable. In May, Xinja announced it would lower its rate to 1.8%. The bank has over 47,000 accounts with more than A$500 million in deposits. The bank plans to launch personal loans and home loans later this year.

Volt Bank closed a $70 million series C round in January as part of the pre-IPO process. In 2019, the bank had highlighted plans to list on the Australian Stock Exchange in 2020 at an expected market value of A$400 million, but it is unclear if these plans have been derailed by the pandemic. The digital bank is currently in the process of beta testing and is offering a savings account with an interest rate of 1.65%.

Investors' interest in neobanks is a ray of hope for newly minted digital banks and virtual banking contenders in Asia-Pacific, a region busy with digital banking developments. In 2019, the Hong Kong Monetary Authority issued eight virtual banking licenses for digital banks expected to be launched this year. However, disruptions arising from the pandemic led to a delay in the launch. So far, only ZA Bank, established by ZhongAn Technologies International Group Ltd., has officially begun operations. In Southeast Asia, Singapore is due to announce the results of the five digital banking licensees in the second half of 2020 while Malaysia is firming up its regulatory framework for virtual banks.