As the pandemic crushed passenger counts in the second quarter of 2020, airlines — along with seemingly every U.S. corporate with the ability to do so — rushed to draw down credit lines, and/or establish new ones.

Analysts, lenders, investors and company management alike wondered whether cash and available credit would sustain the airlines until passenger traffic would rise enough to generate sufficient cash from operations. Hence the emergence of the daily cash burn metric.

Publicly traded airlines produce a remarkable number of metrics detailing financial performance, but the coronavirus pandemic has spawned a new one: daily cash burn. It measures just what its name implies: how much cash an airline expends each day to remain in operation.

The need to measure and report daily cash burn rose out of necessity.

With massive and technically complex fixed costs, airlines cannot easily park their planes, ground their pilots, and then, when the time feels right, instantly and cost-effectively ramp operations back up to cruising altitude. Pilots need to stay sharp even if they aren't flying planes full of passengers, those planes need to be carefully stored and maintained while not used, and routes and market shares need to be protected.

As the pandemic crushed passenger counts in the second quarter of 2020, airlines — along with seemingly every U.S. corporate with the ability to do so — rushed to draw down credit lines, and/or establish new ones.

As for whether cash and available credit would sustain the airlines until passenger traffic would rise enough to generate sufficient cash from operations, this was a question pondered by analysts, lenders, investors and company management.

Hence the emergence of the daily cash burn metric.

Prior to the pandemic, airlines didn't compute and report this metric because … well, why would they? They were in the business of making money, and until the pandemic, that is generally what they had been doing.

Sign up for LCD’s complimentary newsletter for more in-depth research on the leveraged finance and credit markets.

Daily cash burn is particularly useful to lenders. Knowing how airline borrowers compute daily cash burn, and how many days a particular airline has until its liquidity position becomes critical, helps lenders assess a loan and determine whether it requires greater scrutiny.

For the record, five of the seven largest North American passenger carriers have loans on their balance sheets that are components of the S&P/LSTA Leveraged Loan Index (totaling nine separate credits), though together the loans make up a relatively slim 1.22% of the index. 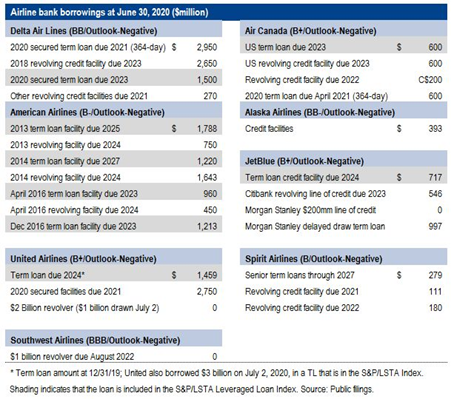 A challenge facing lenders and investors who use daily cash burn is that, not only is the metric not under GAAP, it is not even standardized among airlines.

The eight largest North American carriers all explain how they derive daily cash burn. Southwest Airlines' definition is as descriptive as any: "loss before income taxes, non-GAAP, adjusted for depreciation and amortization expense; capital expenditures; and adjusted amortizing debt service payments." It would then divide the figure by the number of days in the period.

A credit analyst might approach it from the opposite, but more familiar, direction, obtaining a similar result: EBITDA, minus cash interest and capital expenditures, per-day.

The following table compares the most recently reported daily cash burn figures of the eight largest publicly reporting North American passenger air carriers, both against their reported liquidity around the end of the second quarter of 2020, and against a hypothetical 2019 that mimics the pandemic's passenger declines while keeping that year's cost structure roughly in place.

Comparing the most recent daily cash burn to a hypothetical 2019 reveals how much cost-cutting each airline has done to survive. Comparing it to current liquidity produces an estimate of how long the carrier can survive before running out of money. The former is interesting, but the latter can be particularly interesting to lenders. (See the end of this story for detailed notes on methodology and discussion on each airline's specifics).

Others hope for better performance toward the end of 2020. For instance, Delta's CFO, Paul Jacobson, said in the airline's second-quarter earnings release, "we remain committed to achieving break-even cash burn by the end of the year." Delta burned $27 million per day in June.

But as mentioned, getting planes and pilots back in the air to meet the projected rise in passenger counts is not going to be a trivial exercise for airline management. Though increased passenger travel should produce higher revenue, expense levels will also rise. Management's great challenge through the end of 2020 and into 2021 will be keeping expenses aligned with revenue so that daily cash burn declines, and eventually flips to cash generation.

Column explanations for the "Cash burn and liquidity" table

These comments, regarding the second table, are from each airline's press releases and public filings.

Delta Air Lines Inc.: Reported $27 million cash burn per day in June. Daily interest cost in 2Q20: $2.1 million (7.9% of daily cash burn; uses net interest cost provided in Form 10-Q). $15.7 billion liquidity at quarter-end. Signed a non-binding letter of intent for a $4.6 billion CARES Act secured loan, but Delta said on Sept. 14 that it "has indicated it does not intend to participate in this program" (because it is still available, LCD has included this amount under CARES Liquidity). CARES Liquidity: $5.4 billion loans/grants + $4.6 billion term sheet signed = $10 billion (49% of Total Liquidity).

Defines "cash burn" as: "the sum of all net cash receipts less all cash disbursements, but excluding the effect of new financings and new aircraft purchases."

Defines "average core cash burn" per day as "loss before income taxes, non-GAAP, adjusted for depreciation and amortization expense; capital expenditures; and adjusted amortizing debt service payments," divided by the number of days in the period. Company 10-Q noted that using an "alternative cash burn approach" including adjusting for changes in working capital yields a daily cash burn of $14 million.

Defines "cash burn" as "all cash in excluding new loans or federal funds LESS all cash out for operating costs, capital and debt service."

Defines "estimated average daily cash burn" as "the sum of net operating cash outflows, debt service, fleet capex net of financings and pre-delivery deposit payments. It does not include the impact of any financings, capital raises, or the funds from the U.S. Department of Treasury’s payroll support program."