January 2020 saw significant declines in fiber-to-the-premises, or FTTP, equipment shipments and customer foot traffic, casting doubt on 2020 growth prospects for the market. Small ISPs were a key driver behind FTTP growth in Latin America and Caribbean over the past two years, accounting for more than half of FTTP net additions in 2019. The fiber M&A market has also been active, with the average price per kilometer of fiber-optic network above $30,000, Kagan estimates show. Trade data shows imports of FTTP equipment grew in Latin America up to 2019 while costs declined.

In a March 19 investor presentation, Millicom International Cellular SA said they have not seen substantial financial or operational impacts for the crisis. They pointed out, however, that store foot traffic declined between 30% and 50% across the region. Meanwhile, network traffic increased 40% over the week of March 12.

Potential impacts of the COVID-19 crisis on the supply chain and customer demand poses a risk for the Latin American FTTP broadband industry in 2020. The crisis will likely negatively affect revenues and costs of FTTP broadband providers.

Our subscriber projections do not consider the pandemic. While it is possible the crisis could reduce the growth rate and ARPU, it is still unclear what the impact will be.

Already a client: Sign up for our weekly coronavirus newsletter here, and read our latest coverage on the crisis here.

FTTP has been the fastest-growing fixed broadband technology in Latin America during the past five years, showing a 51.5% CAGR. Kagan estimates there were more than 15 million FTTP households in the region by year-end 2019.

Small ISPs are rapidly increasing their market share in the FTTP market. In 2019, small ISPs' FTTP net additions overtook those of large ISPs by almost a million new subscribers. Operators with fewer than 500,000 subscribers that are not subsidiaries of large conglomerates or state-owned entities are considered small ISPs. We estimate small ISPs accounted for more than a third of the Latin American FTTP broadband market in 2019.

Small-ISP-friendly regulation in Brazil, such as the Simples Nacional bill and the updated PGMC regulatory rules for competition, helped position the country as the leader in the segment. The country's small ISPs represent more than 2/3 of Latin America's total small ISP FTTP households by year-end 2019.

Brazil's small ISPs have seen rapid growth in the past few years as operators scramble to deploy fiber in regions ignored by larger players, migrating from legacy fixed-wireless and cable networks. According to the Brazilian small ISP association, Abrint, there are approximately 11,000 small ISPs in Brazil, but only 5,556 reported subscriber data for November 2019.

Small ISPs' FTTP subscriber bases in the rest of the countries in our study are smaller but still significant. Ecuador, Colombia, Bolivia and Argentina had the largest number of subscribers after Brazil.

Based on operators' renewed push towards FTTP broadband, we revised up our projections. We now forecast FTTP to surpass 40 million subscribers by 2027. 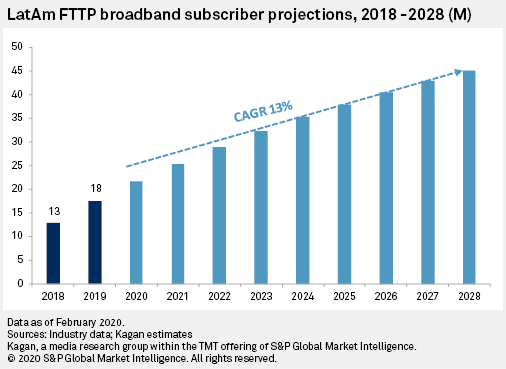 Investors have been actively looking for fiber assets around the region. Our survey of recent telecommunications transactions in the region shows fiber networks are an important value driver, with average prices above $30,000 per kilometer.

We identified 34 transactions involving fiber networks in Latin America between 2013 and 2019. Some participants did not disclose the terms of the deals.

Brazil was the most active market. Driven by attractive valuations, local investors and international funds turned to the Brazilian fiber market over the past seven years. Key players during the surveyed period were The Blackstone Group Inc., Vinci Capital Gestora de Recursos Ltda. and ACON Investments Management LLC. If the Mexican market's competitive history is any guide, however, with Axtel SAB de CV and Maxcom Telecomunicaciones SAV de CV versus incumbent Telmex, Oi SA's recent strategy of refocusing on the FTTH market in Brazil might be a threat for small ISP growth.

A quick discussion with six small MSOs attending AndinaLink Costa Rica 2019 revealed that the main reason for switching to FTTP was lower maintenance costs when compared to HFC technologies. Demand for faster speeds was the second-most important reason behind ISPs' decision to switch.

At AndinaLink, Basilio Perez of Abrint said small ISPs in Brazil are a profitable investment, with ROI around 35% and a recovery period as short as two years. According to Perez, Brazilian small ISPs' ARPUs stand close to 100 reais (US$23.83), with most companies offering fixed broadband services only.

Proximity to clients is small ISPs' greatest strength, as their small footprint allows for direct contact with the customer, speeding up interactions with the company. With large ISPs, subscribers have to go through robocalls or complicated systems to reach their provider.

A major weakness of small ISPs, on the other hand, is their lack of scale, which prevents them from accessing the discounts large ISPs can. In some countries, however, small ISPs are teaming up to negotiate with suppliers. Brisanet, the largest small ISP in Brazil, for example, is coordinating with other small ISPs to centralize purchase orders.

Our trade data shows that the volume of optical network terminal, or ONT, and fiber optics cable imports to Latin America expanded in 2018 and 2019. Huawei Technologies Co. Ltd. is the preferred provider for customer premises equipment, or CPE, in the region, while FiberHome Technologies Group led the fiber-optic cable market, according to our data.

ONT shipments to Latin America jumped 103.5% year over year in the first nine months of 2019, according to Kagan. The units shipped in the first nine months of 2019 are above full-year shipments for 2018, a clear indication Latin American ISPs are increasingly turning to FTTP broadband services. In 2019, Huawei and ZTE Corp. were the top suppliers of ONTs in the region.

Increased affordability of ONTs is one of the factors behind the faster adoption of FTTP by operators in the region. We estimate ONT prices dropped more than 20% between 2017 and 2019, due mainly to increased competition from Chinese players.

After expanding 36% in 2018, the volume of fiber-optic cable imports grew only 12% in 2019, according to our estimates base d on Panjiva data. Slower growth in Brazil, Chile and Uruguay was the main factor behind the deceleration. The region's top five fiber suppliers, FiberHome Technologies Group, Yangtze Optical Fibre And Cable Joint Stock Limited Co., Prysmian SpA, LS Cable & System Ltd. and ZTT International.

Fiber-optic cable prices have come down significantly over the past five years. We estimate the price per kilogram of fiber-optic cable dropped more than half between 2015 and 2019.

According to our estimates based on Comtrade data, Mexico has been the top importer of fiber-optic cable for the past four years, outpacing even Brazil.