Megacable had strongest financial position in 2018

The revenue mix for Latin America and Caribbean's top 11 groups continues to shift, with fixed broadband displacing pay TV as the second-most important revenue source after mobile services in 2018. Total service revenues for the 11 companies declined due primarily to a 41.0% depreciation of the Argentinean peso and economic slowdown in Brazil. Capex declined as financial leverage continues climbing.

The regional market also saw a slew of consolidations in the hands of leading players in 2018 and 2019, continuing a trend of M&A activity over the past 10 years as operators set their sights on acquiring convergent capabilities and scale. América Móvil SAB de CV and Millicom International Cellular SA extended their dominance with acquisitions in Central America, including the coveted operations of Spain's Telefónica SA in the region. More recently, Liberty Latin America Ltd. completed a bid for AT&T Inc.'s Puerto Rico operations.

European operator Millicom ended 2018 as the largest subscriber winner in multichannel, as it acquired new cable operators in Panama, Costa Rica and Guatemala. Meanwhile, direct-to-home's loss of favor across the region became evident for Mexico-based América Móvil and Televisa, the only two top operators to report net subscriber losses, mainly from their Claro TV Brasil and Sky Mexico units. 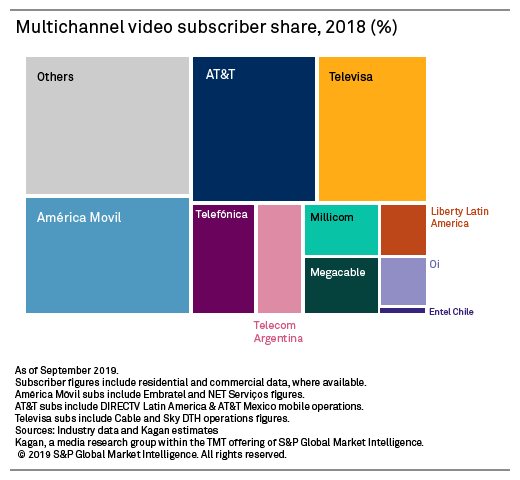 Emphasizing the move toward more connected services, during the year fixed broadband became the main contributor to fixed revenues. Broadband is the only service offered by all 11 regional operators analyzed in this report, among the four main services that also include fixed and mobile telephony and pay TV. Broadband revenues average annual growth rate for the 11 groups was almost twice that of multichannel's in the seven years up to 2018. Fixed broadband is gradually eating away at the preeminence of fixed telephony as the most relevant fixed service by PSUs. The 11 companies represent more than 70% of all fixed broadband in Latin America and the Caribbean, with América Móvil and Telefónica leading the way. 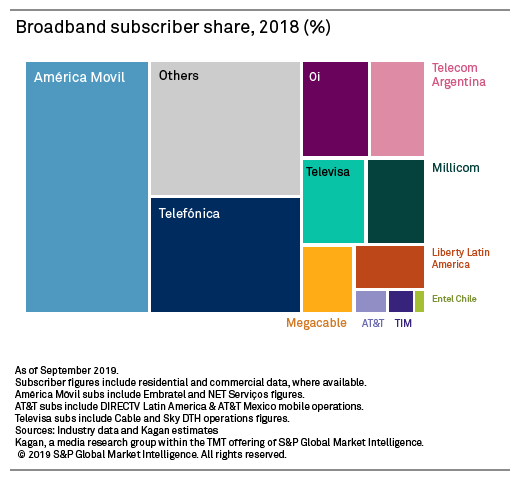 Fixed telephony continued its decline in terms of regional subscribers in 2018, with a 2.7% drop as several companies saw reductions, from leading providers América Móvil and Telefónica to Oi and Telecom Italia. However, over the seven years from 2011, the service still reported average yearly subscriber growth of 0.3%.

For a long time the darling of the industry in terms of client growth, the mobile services segment declined for the fourth year in a row for the nine companies in this report that offer mobile connectivity. Despite the drop, the subscriber base is still above 2011 levels. After recovering in 2017, mobile ARPU declined 5% year on year in 2018. América Móvil was the only mobile operator that did not see its ARPU decline during the period, practically maintaining 2017 levels.

Despite being on the smaller side of the operators reviewed and having operations confined just to Mexico, Megacable turned out a solid financial performance in the region, showing the largest organic increase in revenues, highest cash flow margins and lowest debt in 2018.

Groupwide service revenues fell below 100 billion, a nearly 7% yearly drop in 2018, hit by the steep depreciation of the Argentinean peso and weakness in the Brazilian market. Those same factors impacted average revenue per primary service unit, which dropped by 6.5%. While large groups such as América Móvil, Telefónica and AT&T saw their revenues decline, Megacable grew its revenues by over 10%. 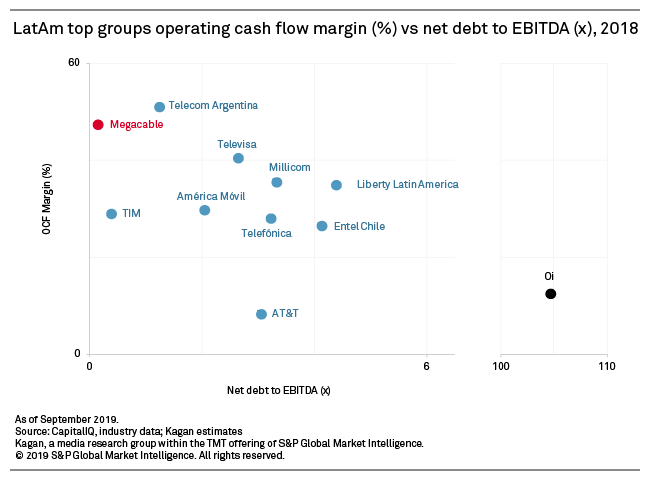 Capex also showed a downturn during the year, with the group of companies reducing it by over 5% on average, with a focus on 4G mobile network expansion and fiber-to-the-home deployment, consistent with the trend of rising relevance for broadband. However, both Mexico's Megacable and U.S.-based Liberty Latin America bucked the trend with over 20% increases in capital expenditures, the study showed.